Can we shoot ourselves in both feet each week and still taste salvation again? All the teams around us except Villa seem to be losing and QPR kept up the process when the only Premier League game of the day saw them squander the remaining game in hand, losing 2-1 to Spurs. Pete Sixsmith relished the weekend off from watching Sunderland, took himself off to Tadcaster with Malcolm Dawson and got back home in time to see our next opponents keep up their winning sequence …

What a pleasure to have a weekend where there is not the constant stress and strain of having to either watch Sunderland AFC or keep an ear on the radio and an eye on the mobile phone for other results. The day was only spoiled by the arrival of the renewal pack for the season ticket – of which more later.

A blank Saturday means a choice of games to go to. Shildon were at home to Consett, Hartlepool were playing Burton Albion and a good friend was prepared to put up with my increasingly testy company on a trip to the west of Scotland for some junior football.

In the end, I opted for a trip down the A1 to the town of Tadcaster. In the company of our estimable deputy editor, Malcolm Dawson, we set off at midday, taking his Renault Twingo on its final journey as his mode of transport before it is recycled by Evans Halshaw and Malcolm drives away from them in a brand new Twingo – complete with a DAB radio (Mazda take note…).

Tadcaster is a brewing town par excellence. On the way in from Boston Spa, the old Bass brewery is passed and here for many years was produced a beer called Bass Extra Light, a cask ale that gave cask ale a bad name. Now it produces Coors and Carling and Magners – brews that any self-respecting toper would avoid like a Wonga logo on a black and white striped shirt.

In the middle of this small market town are two Yorkshire giants, one owned by a company with the romantic name of Intra Brew and the other owned by the descendants of the family that founded it.

An excellent pub with 1930s wooden panels in all four rooms, it served Old Brewery Bitter at the princely sum of £1.80 a pint and from our seat in the very back room, we could glimpse the white horse in the brewery stables next door. The angel failed to appear.

Tadcaster Albion’s ground was a five minute walk away, on the banks of the Wharfe and behind John Smith’s mega brewery. They were playing Highworth Town from Wiltshire in an FA Vase 6th Round replay, the two having traded penalties at Highworth the previous week. Win this and a two legged semi-final against Northern League North Shields beckoned. 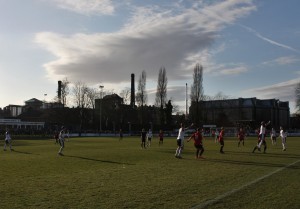 They lost. They missed a penalty in the 45th minute and then failed to clear a bouncing ball in the 75th allowing Callum Parsons to lash home a shot from the edge of the area. Tadcaster huffed and puffed but caused few threats to an increasingly confident Highworth team and they ran out deserved winners.

And then the fun started.

A “well built” (fat) Wiltshire Yokel ran onto the pitch towards the massed ranks of Year 9 and 10 of Tadcaster Grammar School and threw coins at them. The Tadcaster right back clocked him and the Fat Wiltshire Yokel clocked him back. Other players became involved and the initial “scuffle” turned into a “brawl”, with one Taddy player having a real set to with the Highworth keeper. Club officials became involved and the Highworth chairman received a bloody nose as he stepped in to calm things down.

Malcolm and myself (both fully paid up members of the Cowards Union) left by a side gate and bemoaned the state of the nation’s youth and the corpulence of the current crop of yokels and their choice of dress – when did a NYC sweat shirt replace a smock with 4X on it?

Back to the soon to be traded in Twingo and then on to Wetherby and The Frying Pan for some of the finest fish and chips known to man before arriving at Sixsmith Towers in time to watch Villa clinch the game against West Brom (not a good day for Albions) – and also to see the pitch invasion for which I feel that Villa should have 20 points deducted. “That’ll learn ‘em,” as the head of English at Tadcaster Grammar School may or may not have said.

The season ticket pack remains on my desk. I have calculated that seven more days of supply teaching will pay for another season. I don’t know which of those two causes the most misery.