Now is the time for Sunderland to get both parts of the package right: play well and win rather settling for gallant loser status.

After all the praise heaped on the team for a performance that deserved so much better than a 3-1 defeat, Ian Todd, a name synonymous with the London branch of the SAFC Supporters’ Association, brought us down to earth a little with this tweet …

@salutsunderland High heads are all very well but we lost as we surely will at Chelsea and Man. City. #2ndbottom

Since we cannot rely on Jose Mourinho’s charmless, charmlessly led Chelsea to stretch their rotten form to our game at Stamford Bridge on December 19, Ian is right according to all logic to be pessimistic.

That makes home games like Watford on Saturday all the more important as sources of points. On the basis of our form in most of all recent seasons, and the games played under Dick Advocaat this season, this has a worrying layer of banana skin potential. Gone are the days when we could look at the fixtures list and tick off the SoL matches against promoted clubs as home bankers.

Watford have been good, at times very good. If Leicester were not doing spectacularly well, Quique Flores would have been collecting even greater plaudits for his achievements. Six wins and four draws from 15 puts them in 10th place on merit.

But we have recently beaten comparable sides, Crystal Palace and Stoke City, and threatened to upset title challengers at the Emirates. Beating Watford is not beyond us, subject to the usual provisos about discipline, concentration and commitment. And the Arsenal game was a reminder of what happens when you make but don’t take chances.

So Guess the Score. It’s a rollover so all the more reason to have a go. The winner will receive either two mugs, instead of the usual one, from our sponsors Personalised Football Gifts, showing a dressing room scene. The name(s) of your choice go on the No 12 shirt, or a framed print of the same image. I will update this information once I am clear on whether the option is available. 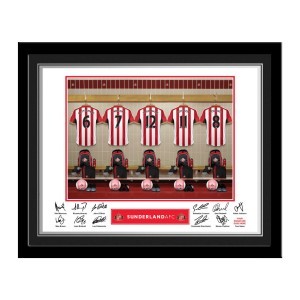 Watford supporters are warmly welcome if they wish to enter and if one wins, he or she will receive an appropriate alternative.

Usual rules: be the first to post the correct scoreline before kick off and you win. You must have a UK delivery address amnd Monsieur Salut’s decision is final.

AND FOR ANOTHER CHANCE TO WIN A PRIZE, check out https://safc.blog/2015/12/safc-v-watford-now-guess-where-the-goals-will-go-in-prizes/

Next Post
Glad all over? At least we’re don’t support these Premier clubs