Malcolm Dawson writes……the last time I went to Sincil Bank, I had a nice day out with other members of the Heart of England Branch, spending time in the Lincoln City Social Club before witnessing a 1-0 win in the F.A. Cup. The last time I went to Lincoln I was enjoying a day out with a friend of mine and her (at that time) young son. We walked the walls, went in the Cathedral, looked in a few shops and had a decent dinner somewhere so my memories of the city are pleasant ones. So were Pete Sixsmith‘s until about 3.05 pm yesterday afternoon. Let him explain……

In the dim and distant past, Bruce Forsyth used to ask contestants on Beat the Clock, to rearrange words into a well known phrase or saying.

Let’s see what you, dear reader, can do with these:

Lincoln end embarrassing could the beginning debacle of be at This.

Although you may have framed these words into a question, if you came up with “This embarrassing debacle at Lincoln could be the beginning of the end?” you would be on the same wavelength as me. If you were to add “And the quicker Jack Ross leaves, the better for all concerned” you would be echoing the thoughts of the vast majority of the Sunderland supporters who entered Sincil Bank with a modicum of optimism and left (many of them before the final whistle) with that optimism gone.

This was by far the worst performance of the manager’s time on Wearside. Buoyed by two decent wins, we went into a game against opponents who appeared to be mourning the departure of the Cowley Brothers and who looked to be in a state of emotional collapse.

Last time at their pleasant and atmospheric Sincil Bank, they collapsed to a 0-6 pummelling by Oxford United. Last weekend, they lost at Blackpool, albeit to a last-minute goal. So, they came into this game needing to show their noisy and boisterous support, that the mourning period was over and that “The King(s) is (are) dead. Long live the King.” New manager Michael Appleton and his players responded splendidly. Ours, manager and players, were supine. To describe it as a disappointment is like saying that Michael Gove is mildly irritating.

When we heard the team, the general feeling was that an unchanged side with a decent bench was just the ticket. The two new defenders would be able to further embed themselves in, the Wyke/O’Nien combination would have another chance to show its worth and McGeoch and Power would hopefully replicate their first half dominance of the previous Saturday.

Well, we got that embarrassingly wrong didn’t we.

They came at us right from the start and produced a performance that had pace, power and positivity. Our response was ponderous, feeble and lacking in any positivity whatsoever as we were outplayed and outfought by a side who had been clearly instructed about our weaknesses and had been drilled to take advantage of them. I imagine that their scouting report on last Saturday suggested that we were slow in the build-up, liked to turn back on ourselves and had no real urgency in the opposition box.

It may well have said that certain players like to hold the ball too long, others are uncomfortable when a quick player runs at them and they offer little up front. And the goalkeeper is going through a dodgy spell. If it didn’t identify those failings, the scout wasn’t doing his job.

Jon McLaughlin has been below the impeccably high standards that he set last season. Many felt that he should have done better with the goal he conceded last week. This week, he was indecisive when coming for a dinked pass by Eardley and was bundled over by Tyler Walker, resulting in either Walker’s 7th goal of the season or an own goal by the keeper. Let’s give it to Tyler.

We had one opportunity to level the scores, when De Bock, who was given a torrid time by Bruno Andrade, hit a fine shot which had Josh Vickers stretching to tip over the bar, but that was it. Nothing else. Vickers had a quiet afternoon as our attempts to salvage something foundered.

Walker hit the post with a penalty after De Bock pulled down Andrade following a scintillating move from The Imps which started deep in their half and quickly moved into our box. The manager responded by hauling off Maguire and Gooch (each equally ineffective) and sending on McGeady and McNulty to supplement Wyke. Alas, it gave Lincoln even more room and another flowing move allowed the unmarked Andrade to gallop away and play a superb first-time ball in for Walker to stab home with Lynch and Willis nowhere near him.

We could have gone home then. There were some dismal attempts to get back into the game, but the City defence was comfortable with the limited options that we had and they were worthy winners at the end. They had everything that we lack. They have pace in Andrade. We have Gooch. They have a goal scorer in Walker. We have Wyke. They have busy central midfield players who move the ball quickly. We are slow and ponderous. They have central defenders who have that security blanket in front of them. We have defenders who are always plugging gaps.

The crowd were nowhere near as unpleasant as at Bolton two weeks ago but there was little support for either players or manager. It may well be that he is coming to the end of his time at Sunderland. He has not improved the side at all over the summer – in fact, we have gone backwards and the reliance on McGeady to pull some magic out is embarrassing.

Whether the current owners want to appoint a new man with the takeover talks at a delicate phase is unlikely, which gives Ross a week or two to sort out this shambles as another debacle at Wycombe will surely tip him over the edge. Nothing less than a run of victories and some flowing, interesting football will satisfy and convince supporters that he is any better than Moyes, Grayson or Coleman.

As often happens, the game spoilt a pleasant day. The trip down was quiet and uneventful, we arrived in Lincoln in ample time to sample some of its many delights and most of us did. I wandered into the very busy city centre, swarming with shoppers and students and full of busy shops. There were even people buying things in Debenhams!!! 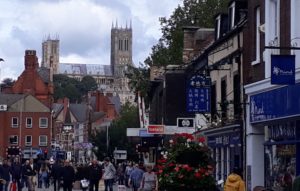 I strolled up to the Cathedral up Steep Hill, the most appropriately named thoroughfare in the UK, and popped in to see if the Imp had been doing his a*** kicking routine. I was assured that he hadn’t and that he was saving that for Sincil Bank later in the afternoon. He should have stayed in his place in the roof and spared us all an embarrassing afternoon which makes me think very hard about wasting time and money on trips all over the country. Visits to Shrewsbury and Oxford are looking increasingly unlikely.

Let’s finish as we started, but no answers this time. I invite you to rearrange these words into a well known phrase or saying;

Are Saturday of there ways afternoon. better a spending

Not difficult is it……?

Lowlights of the game via safc.com