Pete Sixsmith adds some more thoughts on Niall Quinn’s departure and wonders whether Saturday’s pitiful turnout for the Arsenal game, while not the direct cause of a decision almost certainly made some time ago, was part of a process that had made the great man wonder about the supporters’ response to the transformation he engineered …

Read moreSoapbox: was Niall crowded out? Plus, a tough tie at Everton 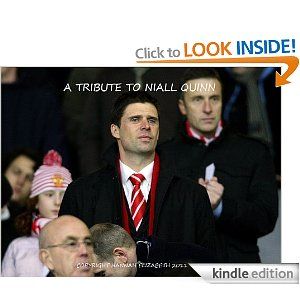 wishes to pay tribute to Niall Quinn, who has announced today that he is leaving Sunderland football club to return to Ireland and concentrate on business and family interests there.

Read moreNiall Quinn: a colossus departs, with our heartiest thanks

We’ve all reacted differently to events swirling round SAFC in recent times. Pete Sixsmith couldn’t resist curling himself up in a ball to hide away and contemplate, though he did emerge to watch Gateshead fans getting disproportionately cross about not winning every game …

If you were expecting a report on last night’s 3-1 win over Wigan Athletic at Hetton, read no further. I decided against it and went to watch Gateshead’s top of the table Conference clash with Wrexham. The ‘Heed lost 4-1, of which more later.

There was another reason for where I spent my evening, and it goes far deeper than just choosing fixtures. Those who know me well are probably aware that when bad things happen, I tend to turn away from it.

Read moreSoapbox: Quinn, Gateshead and no rest from Great Expectations

The mischief makers are at work already. Jeremy Robson naturally found ways of interpreting the Niall Quinn announcement in a quite different way than presented by SAFC …

There has been a widespread discussion following the news that Niall Quinn has stepped down as Sunderland chairman to pursue other duties. Much of this debate is about the truth in the statement. But in reality, can a man in Ellis Short’s position actually afford to tell the whole truth?

The words will flow thick and fast about Niall Quinn and his departure from role of chairman of Sunderland AFC. No one beyond his immediate circle can really know what to make of the new role “spearheading international development”, though there are theories aplenty on that, too. But nor should anyone forget all Niall has done for SAFC. Here is one tribute, with sharp injections of realism, from Eric Sweeney …

Niall Quinn is a Sunderland legend. As a player he formed one half of the most potent strikeforce we ever had. A gentleman on and off the field he will be remembered for his love and affection for the Sunderland faithful and more recently his commitment to the club in spearheading much needed investment and leadership.

Niall steps down as chairman, Ellis Short takes over. Quinn becomes head of international development. Apologies for a rushed post but it is important news – already mentioned in comments – and needs to be passed on properly. Make of this, from safc.com, what you will:

Sunderland AFC has announced that Niall Quinn is to spearhead international development on behalf of the club.

This new remit means that Quinn will relinquish his day-to-day chairman’s duties as he focuses on developing Sunderland’s profile and business interests overseas. To allow Niall sufficient time to devote to the challenge, owner Ellis Short has agreed to take up the reins as chairman.

Speaking about the changes, Niall said: “This is a great opportunity for us to make the club stronger and I’m delighted that Ellis has agreed to support the plan.

“He’ll be a fantastic Chairman and taking this role on speaks volumes about his ambition for the club.”

Read moreNiall Quinn out of the chair: discuss!

This is to do with the dishonesty, humbug and spin of everyday corporate life, whether the corporation makes biscuits, produces oil or runs a football club.

It has nothing specifically to do with Sunderland AFC, or whether we/they should stick with Steve Bruce in the belief that for all the unpromising signs, things are still more or less on the right course.

That is a related but different argument which is endlessly debated here and at many other places (I remain in the Bruce In camp, but only just and also because I have come to the conclusion, rightly or wrongly, that his hand has been forced in one or two key decisions that have adversely affected performance and prospects).

Niall Quinn speaks out on the Asamoah Gyan debacle …

Once and for all, let Salut! Sunderland remind SAFC, and the chairman most of us hold in such esteem, that when misleading information and speculation are presented by the media, from newspapers to TV and online sources, interested parties and even supporters, the clubs often have themselves to blame.

Football clubs, in common with politicians, public agencies and business generally, like to control the release of information as best they can. If this means a little manipulation over timing, or a degree of economy with the truth, you can bet your bottom dollar that is how it will be.

But as shown yet again, this time by the Asamaoh Gyan saga – which the dumbest boy in class could have predicted would cause more than the odd ripple – those who mould the truth to their own, often respectable agenda are eventually stung into making more open public statements than they ever intended.

It is a function of the age; nothing the most secretive entity chooses to do about it can stop, for long, the flow of unwelcome information – and, yes, disinformation and misinformation.

Read moreGyan, Quinn and the root of ‘all sorts of nonsense’

Two abrupt departures from the club and no, we don”t mean Cristian Riveros off on loan to Kayserispor following Jordan Henderson’s sale to Liverpool. Pete Sixsmith ponders Sunderland AFC’s announcement that two boardroom figures are “stepping down” but is already too late with his cry of “gizza job”* …

I did intend to write a jolly little piece on the delight of pre-season friendlies – Little Titterington Wanderers v Great Bumstead Athletic, that sort of thing, when I saw the news that Steve Walton and Lesley Callaghan were leaving the club.

So I immediately turned to the club website and read the usual bland, corporate statement that all institutions give when there is a change at the top. They are “stepping down” from their positions, their “professionalism and commitment” have been invaluable and “we are sorry to see them go”. All said in the name of Niall Quinn, although I would be surprised if he had actually written the press release.

Does this amount to strikebreaking, a scabby edition of Soapbox? Pete Sixsmith is meant to be on strike. Truth is he couldn’t resist upping tools long enough to tell us he likes what he has seen so far in the close season transfer dealings …

Many years of my working life have been spent working with 18-year-olds. Some went on to be doctors and lawyers. One has produced a bestselling novel. Some went into the caring professions – nursing, social work, comforting Newcastle fans. And some hit the depths and became teachers. But I have never taught one with an £8m price tag around his neck or hers.