Monsieur Salut writes: just as well I have Boro-supporting relatives. Another Boro fan, exiled down south and writing about another Championship side for a living, had instantly agreed to sit in the Who are You? hot seat only to let us down a few days later (no names as he may have a good excuse). But my nephew Andy Falconer, who did a good job of answering the questions back in November, came up with a pal, Alex Gunn*, who readily stepped into the defector’s shoes … he thinks Boro will win but offers us two consolation prizes: nominating Sunderland for an imaginary ‘loudest away support’ award and saying we’ll scrape 21st place, ie survive …

Monsieur Salut writes: a very happy new year to all Salut! Sunderland readers, editors, contributors and advertisers/sponsors. As well as featuring the thoughts of a Barnsley supporter, this is the place for entries in Guess the Score. There’ll be a prize as usual – a book or mug, to be sent to a UK delivery address – and Barnsley supporters are very welcome to have a go.

Thank heavens – though not always – for Twitter. It is, or at least can be, a fruitful place to find supporters of other teams. I was fearing a  blank Sunderland -Barnsley ‘Who are You?’ until I found Craig Robinson*.

Craig’s replies, like those of the fan who sat in the same hot seat for the game at their game at Oakwell, are realistic and to the point …

Monsieur Salut writes: in a 46-match season plus cup ties, it is a distinct possibility that there will be gaps …

Colin Randall writes: Just as our Kevin Ball deserves a free season ticket for life at the Stadium of Light, their – Birmingham City’s – Kevin Ball* has earned one to Salut! Sunderland after all his visit to this illustrious series. But think about it: who would you turn to, if looking for candidates, other than someone bearing that name? So Kev’s back for the much-copied Who are You? (I always imagine our confreres at other sites making a painstaking note of all our interviewees before flattering us by imitation). Enough of that: from deepest Devon, the Bluenose version of Kev answers out questions once again …

Monsieur Salut writes: I had a dream; Sunderland beat Fulham 2-0 before my eyes to end the home hoodoo. A likely outcome? Russ Goldman*, a USA-based Fulham fan who hosts the Cottage Talk podcast (as well as a New England Patriots podcast, disagrees as you would expect. He is not too downbeat about his club’s failure to live up to expectations so far and believes they will end up in the top six. He also expects them to beat us on Saturday …

Andy Nicholls* , moderator at the Wolves fan site Molineux Mix, is another old friend to this site. Seven years ago, he appeared here for a joint interview with a Sunderland-mad Silksworth lass, then his partner. They are no longer together but still speak.

Andy is naturally as thrilled by the football he is currently seeing as we are dejected by what has befallen SAFC. He lived on Wearside for a time and retains happy memories, which are described below, leaving a mark strong enough to make him look for our score once he knows what has happened to his own team, though he feels we’re in for a pasting on Saturday (as Wolves bounce back from winning only 1-0 away in midweek!)

Monsieur Salut writes: what’s the betting on Chris Coleman making his home debut as Sunderland manager with a win against Reading (and football accumulator pages may well be the place to find the answer)? After the relief of the win last Saturday – our first league victory since mid-August and only the second of the season – there is pressure to make it two-in-a-row but also a degree of momentum and the confidence winning brings to any team. To Newcastle fans, that translates as thinking beating Burton is roughly the same as winning the World Cup.

Our Reading Who are You? interviewee, Anthony Smith, warmly recommended by Terry Pattinson, a New*as*le supporter who has previously done the honours and may well do so again unless we go up or down), covers Reading for Berkshire newspapers. He’s grown to like the Royals despite roots in South Wales – his club is Swansea – and an inexlicable fondness for Spurs. He overcame a formidable workload to find time to answer our questions. I couldn’t have taken it solely on the word of Terry, a Mag let’s face it, but Anthony comes across as the top bloke he said he was – and he clearly knows his stuff …

Dave Child* is a fan of the old school. Burton Albion through and through – ‘who are Derby County?’, he asks when pressed on the competing attractions of other local teams – he was among the 11,000 travelling fans who made Old Trafford less of a library than usual for a cup replay. And he’s an epxert on the pies served at football grounds and hostelries that welcome away fans (if you;’re going, scroll down to see which one Dave thinks you’d enjoy).

And what was he doing with Paolo Di Canio? Interviewing him for local radio when PDC was Swindon manager and they played Burton…

Salut! Sunderland:  stuck with us in the relegation zone, Burton would probably be expected to struggle even if neutrals would love them to survive. How is it looking for you?

Dave Child: yes we are in our usual position and not really surprised, the aim as we head towards the festive fixtures is to stay out of the bottom three, then come January Cloughie can work his miracles in the loan market bringing in Gareth Bale and Zlatan Ibrahimovic and make a late charge for the play offs! 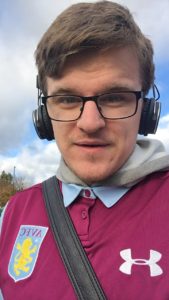 Salut! Sunderland: a few years have passed since we last met on these pages, Josh. Not been a great time for either club but now you’re pushing for promotion – how do you feel about the way things are going?
Josh Henwood: Yeah I took a look at that post the other day and just marvelled at how our fortunes have changed. But that’s football! In terms of how things are going for the Villa, I’m more positive than I’ve been for years, but we need to get through an injury-fuelled Christmas period by the looks of it which could change a promotion drive into mid-table obscurity!