Aston Villa, M Salut decided as he walked away from the Stadium of Light, are not a team of thugs. Darren Bent is doubtless “one greedy b******” (there are sensitive souls looking in), though I quarrel with the “only” of the chant; Agbonlahor gives a decent impersonation of a man in training for an Olympics diving medal and Richard Dunne can act like an immature and unpleasant schoolboy, as he did after conceding the foul that led to our second equaliser. For all that, it was not a dirty match and both sides did try to play. But Pete Sixsmith wonders whether “mildly entertaining” football is what both sets of fans must accept as their lot …

Twelve months ago, I was sitting in a darkened room with a cold towel over my head as I tried to get over the 5-1 drubbing at Sports Direct Park. It was probably the worst result in my Sunderland watching experience and, to be honest, I still haven’t fully recovered from it.

A year on, things are not a great deal better. I sat through a “mildly entertaining” (Louise Taylor’s words in The Observer) 2-2 draw with Aston Villa, which showed to me that both sides will finish somewhere between 8th and 14th and wondered whether the vast amounts of money spent can really be justified for something so mundane.

We scored two good goals, took great pleasure in hooting at Darren Bent when Westwood saved with his foot and saw the emergence of Connor Wickham as a genuine top level player.

All well and good and it led to interesting debate and a feeling that we had been entertained by both sides. But what it didn’t do was make me, or M Salut, believe that we were on the cusp of a breakthrough that would lift us out of the mediocre pile that is much of the Premier League and take us to the rarefied atmosphere of the top six.

Villa fans probably feel the same. Look at both clubs: lots of money spent and no realistic signs of anything special under prosaic managers who know how to master the basics but just seem unable to lift the levels of play.

Tactically, Bruce got it right. The 4-4-2 worked well enough, the midfield beavered away, the defence looked reasonably solid and the two up front grafted away for 90 minutes. It was a vast improvement on the huff and puff against the Mags and the rubbish we dished up at Carrow Road.

However, it wasn’t enough to beat a Villa side who have exactly the same problems as we do: expectations from supporters that are not being fulfilled. 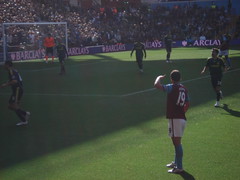 They had the best and most creative player on the pitch in Stiliyan Petrov, who had an outstanding first half and scored a fine goal. He was able to pick his spot because our defence and midfield was all over the place and he saw that Mignolet had come a little too far off his line.

Fortunately, his fellow midfielders N’Zogbia (nothing in this performance to suggest that we missed out in August), Herd and Heskey were unable to give him any worthwhile support and he faded. Gabriel Agbonlahor will be dealt with later.

Our midfield looked better balanced than Villa’s but was one short against them. Vaughan and Colback worked hard throughout, with the Welshman always looking to open up the opposition. We had some width and Larsson probably had his best game so far. He forced two excellent saves out of former loanee Shay Given, a player who has a single winner’s medal from his time in the game – the Championship (or Division One) medal he won with us in 1996.

The main difference between the two sides was up front, where Bent turned in a performance that was easily recognisable to Sunderland fans recalling his less wholehearted outings. His work rate was negligible compared with that of Bendtner and Wickham and he looked slow and sluggish throughout. Gary Bennett mischievously suggested that he would be agitating for a move come the next window.

On the other hand, Bendtner and Wickham worked extremely hard with the latter thoroughly deserving his goal. A great ball by Sessegnon (possibly the trickiest player we have had since Alan Brown turned down David Nixon in 1961) was finished with a resounding thump by the youngster, right across 1996 Championship medal winner Given.

He had a good game last week and a better one this. He could be the business if he maintains this progress – but let’s hope our expectations aren’t too great and that he ends up like Colin West, Ally McCoist and one or two others.


I thought that Kieran Richardson was probably our best player. Should Pete Horan be reading this, his computer screen will be shattered into a thousand pieces as he has as much time for Kieran as Silvio Berlusconi has for Angela Merkel. He looked like a full back on Saturday and none of the Villa midfield got the better of him.

Which brings me back to Agbonlahor. No angel, this Gabriel. I am rapidly forming a real dislike for him based on his aptitude to tumble over whenever he feels a free kick or penalty is needed.

The dive he took on Saturday was a real case of cheating. Larsson never touched him and to go down as easily as he did is, in my book, cheating. My anger towards him was compounded as we defended the free kick with all the panache and style of an Under 11 team, allowing Collins/Dunne to score.

£15 in white or black: click here to visit the Salut! Sunderland Shop

That we came back to take a deserved point is down to the spirit of the players and the stupidity of Dunne who had no need to push Sessegnon. Of course, Alex McLeish saw nothing wrong with it and even claimed the first equaliser should have been chalked off because of some imaginary infringement by Vaughan about a decade before the ball ended up in 1996 Championship Winner Given’s net.

So, two sides who have a lot in common – a long and glorious history, decent fans, US ownership and a feeling that their chances of supping at the high table of Champions League is receding further and further.

Oh, and both have experienced Darren Bent. Our fans turned to bitterness and bile; their fans may well do the same if the likes of QPR come knocking in January with a big cheque.

Old Trafford next week. Let’s attack them and see how vulnerable they really are.

23 thoughts on “The Aston Villa Soapbox: must we settle for mildly entertaining?”