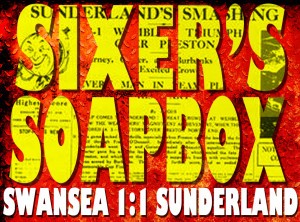 Malcolm Dawson writes…..Pete Sixsmith didn’t go to Wales on Saturday. Instead he went to North Shields to watch The Robins beat a team of southern softies in the FA Vase. He might just as easily have decided to go to watch Whickham v Billingham Town, where if my adding up is correct five players were sent off – four from the home side. Then an injury in injury time further weakened The Home Guard, as they are fondly known, and with only six players on the pitch, the ref had no option but to abandon the game in the 93rd minute with 4 minutes of added time still left to play. “Ruddy Hooligans!” as ARP Hodges would have said. I wonder if Bob Chapman wishes he’d been there to witness the shenanigans, instead of at the Liberty Stadium where the excitement was rather more muted. Probably not although his e-mail simply stated “poor game – decent point.” Still in possession of Sixer’s Soapbox Bob once again steps up to bring us a first hand account of a game which went slightly better than the corresponding fixture last season.

I reported on the corresponding fixture last season, which marked the start of the Poyet era. As you will remember, it was 15 months ago, a dire match and we lost 0-4. In that report I explained that I thought that we were certainties for relegation. Always optimistic I couldn’t see a way out then, so I was glad I was wrong. So, no predictions this time in case I am wrong again.

Unable to find any ‘relatively’ cheap train tickets I decided to drive to Swansea and caught up with John Marshall and Kev Sables beforehand in the Station Hotel. All 3 of us had shared a house together in Sheffield during our student days. All of us were predicted to get First Class Honours degrees. However none of us quite achieved our full potential as we had to support Sunderland during difficult times. We all had to take exams immediately after the final defeat and relegation at Everton on 19th May 1977. That’s my excuse anyway when my students ask me what degree I got. My younger brother Tim even offered the same defence when he was asked to leave Sunderland Poly rather earlier than expected. (And I was watching Heatwave at The Birds Nest in Houghton that night! MD)

We were all in agreement that for once we could get something from the match and that we would be happy with a point. We were not particularly surprised to find Danny Graham starting against his old club as he has done quite well in his recent substitute appearances. Similarly, Alvarez had to be given a start after his outstanding game against Fulham. Optimism rose when I couldn’t see Leon Brittain in their team. He always plays well against us.


Although there were spaces in the away section it was still an impressive turnout. Within minutes of the start I was predicting that this would be the last match on ‘Match of the Day’. I could see a dire 0-0 outcome as a distinct possibility. However, so as long as we got at least a point that was money spent well! One season I am going to keep a record of how much each point has cost me. I suppose it will be an eye watering amount and might even resolve my addiction to get to as many games as possible.

As the half progressed it was Swansea who had the better chances. In fact Gomis had two opportunities that he should have done better with. In response Gomez had a shot from outside the box which went wide.

Although we were competing and playing reasonably well, Shelvey and Ki Sung were beginning to shade it in the midfield. Those two worked a free kick that the latter put in only to be ruled offside. However, within minutes Defoe picked up the ball just inside their half. He drove forward, with players in support, space opened up and he shot from outside the box to beat Fabianski. A typical Jermaine goal, he makes it look so easy. Now, at long last we have a player, who can score us a goal out of nothing, even when we are not playing well.

In the second half we had a decent shout for a penalty to make it 2-0 but to be fair to Swansea they were by now easily the better side. However John O’Shea was having another good game (player of the season?) and with Pantilimon pulling off two good saves I was always hopeful that we might weather the storm. Unfortunately, slack marking allowed Ki to score with a diving header and draw The Swans level. He deserved the goal as he and Shelvey were easily the best two players on the pitch.

So, in hindsight a good point won. If this game had been played before the transfer window we would have lost it. If they had had Wilfred Bony and we hadn’t got Jermaine Defoe then I think the score may have matched that of last season.

And how did M Salut see the game? Check out his ESPN blog here!

3 thoughts on “The Chapman Report from Swansea: Defoe making a difference – point taken”