John McCormick writes: I thought it was when I was old enough to go into pubs but not old enough to do so legally that I first went to went to Bloomfield Road, which would put the date around 1968. I’m pretty sure, however, that it wasn’t Sunderland I saw playing there but Bolton Wanderers, who had Charlie Hurley turning out for them and he didn’t join Bolton until the start of the 69-70 season.

Pete Sixsmith has no such doubts. He was there before me and he remembers it, or at least the bits thatmatter, well.

We go a long way back for this one, to the early autumn of 1964 and our return to the top flight after six seasons in what were the previously uncharted waters of the Second Division. Manager Alan Brown had built a team that had a fine goalkeeper, an iconic centre half, inside forwards who could scheme and work and score goals and at least one winger who could run, shoot and score.

In those days, there were no transfer windows and subsequently, there was no huge spending spree from the manager. The principle reason for this was that he had left in July and no replacement had been appointed and wouldn’t be until November, 19 league games into the season.

Brown walked on a matter of principle over a bonus he felt he was due and took over at Sheffield Wednesday. The Sunderland directors, led by the Chairman of the England Selectors, laundry magnate Syd Collings, decided to bide their time and appoint the right man when he came along. In the meantime, a Selection Committee was created to select the side with input from coaches Arthur Wright and Tommy Wright.

It didn’t work out particularly well for them. Jimmy Montgomery broke his arm in pre-season and we went into the top flight with a 15-year-old keeper between the sticks. Derek Forster had just left school, was regarded as “promising” and played the first three games before Sandy McLaughlin was signed from Kilmarnock.

It took us until the ninth game of the season to claim our first win, a Nicky Sharkey goal seeing off Blackburn Rovers in front of 40,695 at Roker Park and the Sunderland hordes began to prepare for their first visit to Blackpool since the unfortunate debut of Charlie Hurley seven years previously, when we had slumped to a 7-0 defeat. We improved the next week, only losing by 6 to Burnley at Turf Moor. 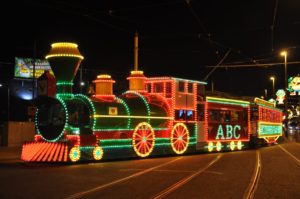 The Blackpool game was eagerly awaited. In the absence of any local derbies, this was possibly the first away fixture that many looked for and to have it in the middle of the Illuminations season was a real bonus. Blackpool in September/October is an attraction. Blackpool in February/ March is not. The Blackpool Lights were a must-see at this time. It was the principal seaside resort in the country, was “noted for fresh air and fun” and the Illuminations extended the season by at least six weeks. Trams disguised as space rockets and Mississippi paddle steamers whizzed up and down the front, the Tower was illuminated and there were huge tableaux of lights from North Shore to Bispham. The town was packed.

As was Bloomfield Road on the 26th September 1964 when 31,291 squeezed into the ground to watch Sunderland take on the Tangerine clad home team. They had some good players: keeper Tony Waiters was a Canadian international, Glyn James was a towering centre half and Ray Charnley a prolific goal scorer.

They also had two men who would play a part in the World Cup win two years later. Full back Jimmy Armfield lost his national team place due to injury but made the final 22, while Alan Ball, only 19 years old when he scored in this game, was a pivotal part of Alf Ramsey’s successful team.

Their ground at Bloomfield Road was known to generations of North Easterners as it was close to The Central WMC, a veritable home from home from those who took their annual holiday on the Fylde Coast. There was also a coach park next to the ground which I came across on my first visit to the Lights in 1962, courtesy of Scotts Greys Tours of Darlington. I remember being poorly on the way home after consuming industrial amounts of toffee apples, candy floss, chips and chocolate – all on the same plate.

I managed to persuade my father to let me go to this game on the bus that M Salut and I travelled on to the home games. It was run by Kenny Snowdon from Shildon (still with us) and Billy Reilly from Close House (long gone) and was made up of many of their colleagues from the British Rail Workshops in the town. The pater was unwilling to let me go on a “boozy bus”, having had experience of them in his younger days, but the mature approach of M Salut, who promised to look after me and who also promised not to visit any pubs, swayed him. I was 13, Colin was 15 so the chances of a pint of Magees or C&S were remote.

The bus left early and was already loaded up with crates (proper wooden ones) of Newcastle Brown Ale from The Royal Hotel in Close House. There were some fearsome drinkers aboard that day. Kenny was a steady drinker, Billy an enthusiastic one, but the likes of Alan Metcalfe, Dave Terry and Vernon were in the big league. At the top of that league was Jasper Jones, a huge man with the capacity of a herd of camels and the girth of the largest barrel ever made. He was on his second bottle by the time we made it to Evenwood Gate and he continued to pop away as the bus ambled through Barnard Castle, Bowes, Brough, Kirby Stephen, Sedbergh, Kirkby Lonsdale and then along the A6 from Garstang to Poulton-le-Fylde and into the town.

Eyes skirted the horizon for the first sight of the Tower (some through the bottom of a Brown Ale bottle) and as the coach pulled up outside the ground, the 50+ passengers tumbled off and dashed into the ground or the WMC next to it for more ale and a chance to empty bladders that contained enough water to fill Cow Green reservoir.

Blackpool were a decent First Division side and still had a kind of magnetism about them, 11 years after their FA Cup Final win. The two Stans were long gone and manager Joe Smith (he of the famous team talk in an FA Cup re-play [“No extra time lads, we have a train to catch”]) had been replaced by Ron Suart and they still had another two seasons left as a regular top flight club.

They lined up thus; 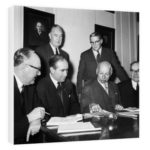 Chairman Syd and his fellow directors came up with a team that consisted of nine of the promotion winning XI, with Sandy McLaughlin in goal and Tommy Mitchinson replacing Brian Usher on the right wing.

We started badly and Ray Charnley, a genuine Blackpool legend (193 goals in 363 appearances) put them ahead. Our hearts rose a little as we stood in the North Stand when Charlie equalised but we were behind ten minutes later when Alan Ball converted a penalty. Maybe Syd Collings threatened them with a stint in his laundry if things didn’t improve in the second half. If that were the case, the Lads would be spending the next week over a poss-tub and then dashing away with a smoothing iron, because the game was wrapped up in the 62nd minute when Oates made it 3-1.

The huge Sunderland following in the bumper crowd of 31,291 trundled off to spend their Savings Club money in the various watering holes around the town. We non-drinkers walked along the Golden Mile and as the night went on and the pubs emptied, I witnessed scenes of debauchery that were new to someone who lived in the reclusive area of Drybourne Park.

The bus left at 11.00 and there were some sights on it. Half of me wondered why anyone got into that state and what fun was there in drinking yourself senseless, while the other half wanted to be in that happy and semi-comatose state. I slept a little on the way home and got up the next morning to deliver my Sunday papers.

Bloomfield Road has changed since then. The Kop (where we stood in 1987) is now The Mortenson North Stand and many of us will be in there. The long terrace down the side, which had a huge advert for Ismail’s Tea Company painted on its roof, is now the rather prosaic East Stand (where we sat in 2011) and will also be full of Red and Whites.

There is the neck end of 8,000 going on this trip. My experience of big away followings suggests that many will be expecting an easy win and that tolerance levels may dip if we are not 4 up by ten past three. Be aware Blackpool are a decent side, capably managed by Terry McPhillips.

Their support will not be great as many loyal Tangerine fans are boycotting the club for as long as the Oyston family are in charge. Crowds are poor and there are protesters outside most games. Unlike some clubs we could mention, when they really dislike an owner, these fans show their contempt in other ways to misspellings on bed sheets and shouting outside sports shops. We should help them by refusing to buy food and drink inside the stadium.

After a low-key performance on Saturday, a win is needed to start what we hope is a successful 2019. Ha’way the Lads……

3 thoughts on “The First Time Ever I Saw Your Ground: Blackpool and Bloomfield Road”