John McCormick writes: this one was pencilled in when the fixtures came out but by Christmas I knew it would be a non-starter. A pity, as a weekend in Somerset with a quick trip across the border would have made for a brilliant weekend at this time of year.  I reckon I’ll just have to make do with reminiscences by Pete Sixsmith instead.

There are worse things in life:

Our last three visits to the blue half of Bristol have been on different grounds. In fact, one of them wasn’t even in Bristol. That makes it hard to know where to start, so we’ll follow the advice of Dame Julie Andrews and “Let’s start at the very beginning, a very good place to start…….”

Our first visit to Eastville was on the 27th September 1958 as we adjusted to life outside the top flight for the first time in our history. We hadn’t started well and were 22nd (bottom) of the league and another relegation seemed likely. 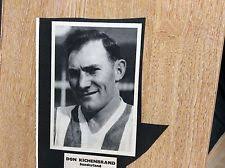 he letters page of The Football Echo would have made for miserable reading. Alan Brown was not universally popular and big-name players like Don Revie, Johnny Bollands and Colin Grainger were not loved. At times, those feeling extended to our centre forward, Don Kichenbrand, a South African who had been signed from Glasgow Rangers and who was not the subtlest of players. Nicknamed “The Rhino,” he had done well in his first season in Scotland but struggled in his second. Signed for £8,000 he scored 6 times in 10 games, which was impressive but insufficient to save us from relegation.

He did well in Division Two and scored 21 goals in 58-59 helping us to avoid another relegation before he returned to South Africa. He got our goal in this game, which ended up 2-1 to The Pirates but we did rally to finish 15th, while Rovers finished 6th, two places behind Liverpool and four above erstwhile rivals, City. 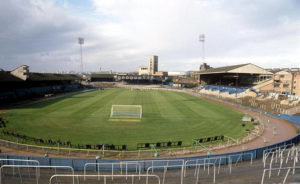 My first visit to Eastville, with its dog track, its huge tote board and its rather sweet flower beds, was in December 1977. We had not taken well to Second Division football after our unfortunate relegation the year before and were well off the pace. What made me drive all the way to Bristol and back in a day for a game that was of very little significance is beyond me – but I did.

I was the proud possessor of a red Citroen 2CV which did scores of miles to the gallon but which was certainly the least sophisticated vehicle I have ever owned.

The windows opened up over, the heating system was basic and the seats could be taken out to be used as picnic chairs. You can’t do that with the Mazda CX3 but the seats are heated. I remember us being hopeless that day. With fifteen minutes to go we were 3 down, then a Bob Lee goal and a Gary Rowell penalty gave us hope.

Alas, it was not to be and it was a long and draughty ride back to County Durham.

Ten years later, in our only other sojourn into the Third Division, we played them at Twerton Park, Bath. There had been a dispute over Eastville and they left the city altogether for ten years, playing their home games at the rather run down home of Bath City.

They took us apart 4-0 on a Wednesday night in February causing a hiccup on our march to the title. Nigel Martyn played in goal and Ian Holloway, a Gas man to the tips of his toes, opened the scoring. I seem to remember that our players rearranged the furniture in the visitors dressing room afterwards. 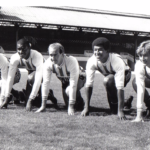 Three days later, we lost again, this time at Aldershot, where Steve Berry (remember him!!) scored the winner for the Shots as the game finished 3-2. Cue letters to the Football Echo demanding the sacking of Dennis Smith, the defenestration of Bob Murray and entire team to be placed in the stocks so that waste materials could be thrown at them. We won the league by nine points. 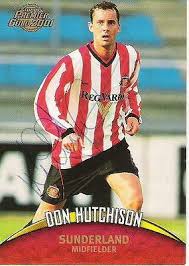 Our sole visit to The Memorial Stadium was in October 2000 for a League Cup tie which proved to be a tricky tie for us. This was the second good season we had under Peter Reid and there were high hopes of a cup final appearance.

Rovers made us work hard for our 2-1 win. In front of a crowd of 11,433, Don Hutchison opened the scoring in the 48th minute with Nathan Ellington replying 15 minutes later. With extra time looming, Hutchison claimed his second in the last minute and took us through to a Fourth Round tie with Manchester United. We won that one as well after extra time before going out to Crystal Palace in the fifth round.

The team that night was; 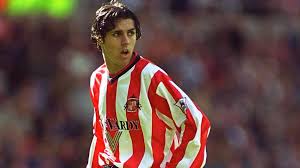 I didn’t get to that game but have visited The Memorial Stadium in my quest to do the 92. I saw them play Oxford United in September 2015, a Sunday lunchtime game after a weekend hopping in South Wales. I had been to Port Talbot Town on the Friday night (they beat Aberystwyth 4-2) and then Carmarthen Town on the Saturday (a dreadful 0-0 draw with Bala Town) and moved on to Bristol the next day.

The Memorial Stadium was not easy to find, tucked away on the southwest side of the city. Opened in 1921 to commemorate the rugby players of the city killed in the Great War, it was home to Bristol RFC until 2014 when they moved to Ashton Gate.

Rovers moved there as co-owners in 1996 and are now sole owners. There have been plans to re-develop it but they fell through as did plans for a new stadium at the University of Western England and the current owners of Rovers, the Al-Quadi family, have said that they will continue to look at ways of improving it.

It’s a quirky ground and not particularly good for away fans. The game I saw started in bright sunshine but there was a heavy downpour and the Oxford fans got a real soaking. The standing area is uncovered so let’s hope that there is no Accrington style monsoon.

They dried out in the second half and celebrated when the very impressive Keymar Roofe (he moved to Leeds United at the end of the season), scored a spectacular winner in the 62nd minute. Rovers were down to 10 men in the first half when Ollie Clarke got a straight red and Oxford’s Liam Sercombe followed him in the second half.

It was a tick; only Forest Green Rovers left to do.

Cup draws dictate that we shall be here again in ten days’ time. A Spring Double would be nice……

Bristol Rovers v Sunderland published on Youtube by Aug 2011 Floyd Nello. If there is any copyright claim on the video or images used in this report, not answered by “fair Comment, let us know and we will acknowledge or remove as requested

1 thought on “The First Time Ever I Saw Your Ground: Bristol Rovers and the Memorial Stadium”

Next Post
The Bristol Rovers Who are You?: ´the day Sunderland trashed our dressing room’