Malcolm Dawson writes……..here in the latest instalment of his series in which, prior to an away game, he recalls the first visit he made to the home(s) of our upcoming opponents, strong Pete Sixsmith looks back on previous outings to the UK City of Culture that is Kingston upon Hull. 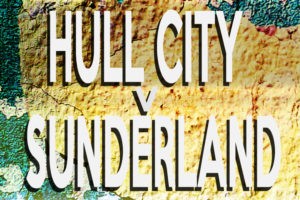 Along with ourselves they can probably lay claim to the title of “most working class city ever to have played in the Premier League” (with Bournemouth and Norwich not far behind) and they can certainly take the title of “senior club with the best suspension bridge nearby” and “club with the most supporters who drop the letter h the most.” For the Tigers fans live in ‘Ull on the banks of the ’Umber and some of them live in ‘Essle or ‘Altemprice, except they’re not very keen on saying t’s either. So, for their followers, it’s ‘Ull Ci-i.”

They now play in the well-appointed KCOM Stadium, built in 2002 on the site of the cricket ground at Anlaby Circle and a stone’s throw away from City’s first ground at Anlaby Road. The finance for it came when the council sold its share in the local telecommunications company – the one that was never part of Post Office Telecoms or BT and gave Hull its distinctive cream phone boxes. They built a stadium that would be shared by Hull City (then languishing in the basement division and just out of administration) and Hull FC, one of the two senior rugby league clubs who represent the city. Tradition dictates that if you are born west of the River Hull you follow FC, if you are born east of the river, you are a Hull KR supporter.

I first ticked off the KC (as it was then) in December 2003. We had a Monday night game at Coventry (drew 1-1 – Stewart Downing scoring) so I took the train via Doncaster and Goole for City’s clash with Bury.

The train ride to Hull is an interesting one. You pass under the Humber Bridge (known by locals as “The Bridge to Nowhere”), go past the KCOM and arrive at Hull Paragon station. Like many of its kind, Paragon is a shadow of its former self and the windows where you could book through tickets to Oslo, Hamburg, Rotterdam and Lubeck are long gone.

Much of the city centre was destroyed by enemy bombing during the Second World War. After London, Hull was the most bombed city in the UK, partly due to the fishing fleet and engineering factories, partly due to the fact that assorted Heinkels and Dorniers wanted to ship their bombs before they flew back to their bases. Consequently, they destroyed the heart of the old Victorian city.

There was a major rebuild in the post-war period and nowadays it looks a little dated in places but the City of Culture tag has led to more visitors and a discernible pride in a city that has much to be proud of. After all, it gave the world Tom Courtney and Maureen Lipman, William Wilberforce and Amy Johnson and Clive Sullivan, the first black man ever to captain a British national team when he led the Great Britain rugby league team to victory in the 1972 World Cup – long before the posh boys had ever even thought of having one.

Before they moved to the KCOM, City played at Boothferry Park, a relatively new ground opened in 1946 and a bit of a stunner in its early days. It had 6,000 seats (more than most clubs), its own railway station which I used once and six floodlight pylons, three of which were very, very tall. They were part of the Hull renaissance of the 1960s when the Needler family used the profits from their business to bankroll the club. Serious money was spent on Ken Wagstaff, Ian Butler and Ken Houghton and along with the formidable Chris Chilton they made Division Two (now the Championship for our younger reader) for the first time in a long time.

It was during that period that I made my first visit to Boothferry Park. Not to watch Hull City but to see the third game of an engrossing FA Cup Fifth Round tie between Sunderland and Leeds United. It was a game that Sunderland supporters will remember until their dying day.

There was no love lost between the two clubs. Leeds were near the top of the league and we were on a good run and went into this game after we had completed the second leg of a 3-0 double over Our Friends From The North.

We squeezed another 5,000 into Roker for the cup game as 55,763 paid to watch a cup tie that was spoiled by a strong wind – as was often the case at our old home. Neil Martin gave us the lead, Jack Charlton levelled ten minutes later and Bobby Kerr broke his leg in a challenge with Norman Hunter. Ironically, it was a needless foul by Kerr on the Leeds hard man that caused the injury.

The replay took place on the Wednesday at Elland Road and also ended 1-1 after extra time. It attracted a record attendance of 57,892 to the second best sports ground in the city, including at least 15,000 Sunderland supporters. We (for I was there) saw John O’Hare put us ahead and Johnny Giles equalise within ninety seconds – a typical Sunderland occurrence..

Alan Gauden came in for Kerr with John Parke on the bench and for Leeds, Albert Johanneson replaced Paul Madeley with Terry Cooper wearing the No. 12 shirt. 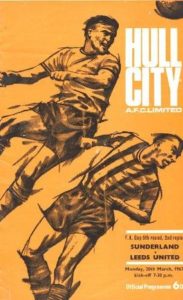 Neither side could manage a winner so off we went to Boothferry Park on the Monday for a second replay, a game that pulled in 40,456. We were given the terrace down the side, the one that was served by Boothferry Park Halt and the seats behind the goal that backed onto Anlaby Road, while Leeds had the other end and the main stand.

Martin Harvey replaced Len Ashurst and Colin Suggett was the 12th man while Cooper replaced Johanneson with Madeley on the bench. But the most important change came in the middle…

The first two games had been well refereed by Ray Tinkler of Boston but he was replaced by Ken Stokes of Newark for this one. That’s a name that has gone down in the Hall of Infamy for Sunderland supporters. His decision to award Leeds a penalty in the 89th minute for a foul by Cec on Jimmy Greenhoff was controversial to say the least.

Rod Belfitt had put Leeds ahead early on and it wasn’t until the 78th minute that Alan Gauden equalised. It was looking like extra time when Greenhoff headed for the box, fell over Cec’s leg at least five yards away from the 18 yard line, rolled into the area and was awarded the spot kick by a referee who couldn’t wait to give it.

Mayhem ensued. People tried to get on the pitch and one ginger haired lad with a haversack, which probably contained rivets and a welding torch from Doxford’s, swung it at Bremner and Bell before the Hull City Police grabbed him. I pushed forward to get on but Hull’s finest formed a wall to prevent it and Giles stepped up to convert the kick and win the game.

There was still time for the execrable Stokes to send George Herd off for a “foul” on Cooper and George Mulhall for telling the referee what he thought of him. The game ended in controversy and reflected badly on the game in general.

Years later, Peter Lorimer revealed that Don Revie had told his players at half time to go down in the box if they were not ahead in the last 15 minutes. Put that together with the indecent haste that Stokes awarded the penalty and our supporters didn’t have to be Inspector Morse to suspect, rightly or wrongly, some kind of fix. Stokes never refereed a Sunderland game again.

I got home at some God forsaken time and had to go to school the next day. I was as grumpy a pupil as I was a teacher when we lost and I probably bullied a couple of first formers to make me feel better.

I have been to Boothferry Park many times since – the highlights being a 2-0 win in 1973 where Monty made his greatest ever save, a 4-1 win when we won promotion three years after that and an embarrassing 3-2 loss one New Year’s Day when the whole crowd was silent due to hangovers.

The KCOM also has positive memories – Ross Wallace’s winner, Steed Malbranque’s great finish and Billy Jones sneaking up to relegate the Tigers last season. I hope for positive memories after this trip but I fear a similar result to the two defeats in2013-14……..

And if you haven’t already you can read the rest of the series that is proving to be more entertaining than watching the recent performances of the boys in red and white “The First Time Ever I Saw Your Ground” here and the parallel series when he recalls the first time he witnessed the visit of this season’s opposition teams to Sunderland “The First Time Ever I Saw Your Team” here.

12 thoughts on “The First Time Ever I Saw Your Ground: Hull City”

Next Post
Hull City vs SAFC Guess the Score: who can bounce back?