John McCormick writes: a few of the old grounds I’ve visited are not around now – Oxford’s Manor, Maine Road, the Old Den, Boothferry Park and the Brittania spring to mind – but what is strange is that I haven’t been to any, not one, of the new grounds that replaced them.

For some reason, though, I rarely think of Ayresome Park when I’m mentally checking away trips off. But been there I have, way back in the Sixties, though in common with my other dead grounds I’ve never been to its replacement.

Pete Sixsmith has, however. In fact he’s been to both and is thus able to inform, entertain and educate us with another account from his ‘first time’ series. So pour a Double Maxim, kick your shoes off, sit back, relax and enjoy:

This is the first time I have had to do two grounds for this feature as Middlesbrough left Ayresome Park in 1996 and moved a couple of miles to a dockside home in what was going to be the new heart of Middlesbrough, Middlehaven. Alas, the development has hardly happened, although if you like rusty ships the outlook is good. 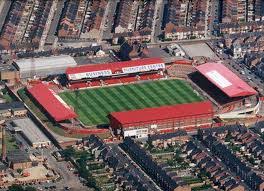 Ayresome Park was one of the most hemmed in grounds in the Football League. Like Roker, it was completely surrounded by terraced streets on three sides and, behind one goal, Middlesbrough General Hospital shared a wall with the Holgate End.

The ground was opened in 1903 after the Boro moved from nearby Linthorpe Road. No expense was spared with the North Stand costing the princely sum of £1,250, in the days when the British transfer record was £1,000, paid by Middlesbrough to us for Alf Common. Its capacity of 54,000 was below that of Roker and the Sports Direct and the record attendance was a mere 53,596 compared with our 75,118 and Our Friends From Tyneside’s 68,386.

We were the first visitors to Ayresome on September 12 1903 and we spoiled the Boro’s day by beating them 3-2.

Our line up was;

Robinson, Hogg and Gemmell scored in the second half after we went into the pristine changing rooms a goal down. We finished 6th, Middlesbrough ended up 10th, four points away from relegation.

My first visit (and I have checked this very carefully) was in March 1962 and I suspect it was a belated birthday treat. By that time, I was being weaned off my devotion to rugby league and Leeds RLFC by football and Sunderland AFC. I had cut my footballing teeth at Dean Street, Shildon, went to Feethams to watch Darlington and then, due to the influence of Monsieur Salut, began to take an interest in Sunderland.

My father worked out of an office at Hendon Dock at that time and sometimes brought in a Sunderland Echo so I became acquainted with Alan Brown, Charlie Hurley and Brian Clough through that. He also played the piano in a dance band at the Majestic Ballroom in Darlington (still there dispensing bingo cards to Darlingtonians) and the band leader was a man called Frank Abbott.

Mr Abbott lived in Richmond and supported the Boro so my first visit to Roker in 1961 was to see the Wear-Tees derby (of which more later in the season). I was so taken with a full Roker Park that I immediately became a Sunderland aficionado and Mr Abbott’s protestations that the Boro were a better bet fell on closed 12-year-old ears. To me, it was like comparing Leeds with Bradford Northern.

I went to Ayresome for the first time on the March 31 1962 with Frank and my dad and possibly another member of the band who was a Boro supporter. The Aged P was not a football man and I suspect the attraction of the trip was to have a couple of beers in the Linthorpe Hotel while I sat in a corner drinking pop and eating crisps and taking in the sights and sounds of a big derby game.

I remember standing in the North Stand Paddock (they put seats in there for the 1966 World Cup) and I vaguely remember Brian Clough scoring in the first half. We held on for a valuable win and Mr Abbott was tight lipped and ashen faced as he drove us back to Darlington in his Ford Zephyr while I felt smug sat in the back.

Our team that day was;

I suppose I should be fair and say that Peacock went off after two minutes, reducing them to 10 men and then Ronnie Burbeck pulled a thigh muscle after 30 and hobbled around for an hour. But when you are 12, none of this matters.

I used to go to Ayresome quite a lot in the 60s. It was easy to get the train from Shildon and, when Sunderland were away and the pocket money wouldn’t stretch to a trip to Wolverhampton, I would board the slam door diesel at Shildon and alight at Middlesbrough.

I saw some decent games. I saw Stan Anderson complete the hat trick of North East teams in November 1965 and opening the scoring for Middlesbrough against Cardiff City. However, a young striker called John Toshack stole his thunder by rattling in a couple as the Bluebirds won 4-3.

And I quite liked Ayresome Park which I thought was a far tidier stadium than the Sports Direct and I didn’t have to sit on an OK bus to get there. I thought the supporters were funny as well, men who reminded me of rugby league supporters, all big and beery and highly critical. Teessiders are great moaners – but I suppose they have a lot to moan about.

Fast forward 34 years to April 19 1997 and that cherubic 12-year-old was the bitter and twisted correspondent that you see hunched up in his seat at the Stadium of Light. In his late 40s with no prospect of early retirement and a whacking great pay off, I had succumbed to my first bout of gall stones and had missed the previous weeks defeat to Liverpool because of that. I was persuaded to go to what was then the Cellnet Riverside (it will never have the poetic impact of the Sports Direct) despite feeling as if something was attempting to grind its way out of my stomach.

It was a fine afternoon and it was a crucial game for both clubs. The loss against Liverpool had dropped us into 17th place while the home team had had three points deducted for failing to send a team to play at Blackburn in January. They had a virus sweeping through the club and claimed that they could not turn a team out that would give Blackburn a competitive game. They did have medical certificates for 23 players and the team they would have put out would have been a mix and match outfit but their failure to turn up left them wide open to the Premier League’s sense of fairness.

We won it thanks to a Darren Williams goal at the end of the first half. Allan Johnston was fouled out wide and Chris Waddle’s free kick was headed home by Williams when he got in front of the defenders. It was our first winning goal on Teesside since that day in 1962 and, irony of ironies; both winners were scored by Middlesbrough born players.

Look at the YouTube highlights and you see billowing shirts and sensible haircuts. We wore white shirts and black shorts with Scorpion Lager emblazoned on the front while the Boro’s all red had a satiny sheen to it:

Our last win there was in September 2005 when we won our first game of the season in that wretched 15-point year. Tommy Miller and Julio Arca netted that day and Nyron Nosworthy made possibly the worst back pass in recent history to the amusement of the crowd and the Match of the Day panel. That was a Sunday game. A similar result would be welcome.

We go into this game in our usual state of chaos/flux. Middlesbrough have had a good week winning at Reading and Hull and they will fancy their chances of improving their relatively dismal home form. Players like Assombalonga and Braithwaite will be keen to get at our defenders while Downing and Leadbitter will want to control the midfield. 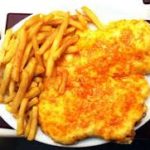 it could be an indigestible Sunday lunch…….

5 thoughts on “The First Time Ever I Saw Your Ground: Middlesbrough, Ayresome Park and the Riverside”

Next Post
Middlesbrough Who are You?: ‘if we score early, SAFC may fall apart’