With Christmas and hopefully Salut! Sunderland’s website issues behind us, we look forward to New Year and a trip to the seaside, where more than 7,000 Mackems, many of whom will be nursing massive hangovers, will converge on Blackpool’s Bloomfield Road.

But before that we have a little matter of a home game against Shrewsbury Town, currently languishing just above the relegation zone. It is a game we will be expecting to win but as we have found out already this season, there are no easy games in this division and our boys will need to be on top form to avoid an upset. Pete Sixsmith first saw them at a time when punk rock was about to be usurped by New Wave but it was Pink Floyd keeping Abba off the top of the charts.

After the bumper crowd for the Boxing Day game against Bradford City, it would be wildly unrealistic to expect a similar number to turn up three days later for the visit of Shrewsbury Town.

That is no slur on the Shrews, a fine club with loyal support, more a comment on the economic reality of life in a part of the country where money is in short supply and belts are being tightened as the threat of a No Deal Brexit looms ever larger.

This will be the Salopians’ fifth league visit to Wearside and their inaugural league game at the Stadium of Light. Their previous sojourns to Roker Park saw four wins for us and a draw, while they have been to the Stadium of Light once, for a League Cup tie a couple of years ago.

That game was settled with a spectacular strike by Adnan Januzaj, a few minutes from the end of a dreadful game and one that was to mark the real start of the David Moyes era at the club. It came three days after the home defeat to a poor Middlesbrough side, a defeat which caused the Scotsman to announce to the world that we were in a relegation battle – after two games. Moyes went on to prove PG Wodehouse’s assertion that “It is never hard to tell the difference between a Scotsman with a grievance and a ray of sunshine” as his demeanour deteriorated week by week and we slipped out of the Premier League.

That night our team consisted of but two players who are still with the club and one of them has hardly played. Step forward Donald Love, an inspired Moyes signing whose contribution to Sunderland AFC has chiefly been to keep the physios busy. This season he has made four appearances and his return to first team duty is not particularly eagerly awaited. If you are wondering who the other one was, it was Lynden Gooch. He’s done canny.

The Shrews claimed a point here in November 1986, the year of our first relegation to the third level, when a meagre 12,374 turned out to watch a Sunderland side that featured such fine players as Steve Hetzke, Terry Curran and David Buchanan. The visitors, who had

Nigel Pearson and Gerry Daly in their line-up, took an early lead through Micky Brown and it was young Gordon Armstrong who levelled on the hour. We sat in mid table after that game but the slide really started in the New Year and we finished in 20th place, before losing to Gillingham in the play offs.

Shrewsbury had first visited Roker Park seven years earlier for a rare Friday night game. The Football League, in its infinite wisdom, decided that the whole programme should be played on a Friday night so that supporters could then spend the next day trailing around various town centres buying things for Christmas. It was not an experiment that was repeated as crowds were down, although the shops and pubs (open between 11 and 3) did better.

These were the days before shopping malls and retail parks, when folk went to Binns and Joplings and Doggarts for their Christmas shopping. Amazon founder Jeff Bezos was a mere child of 15, although he was probably hatching his fiendish plan to close down every shop in the world and have us buy, buy, buy online – whatever that was. 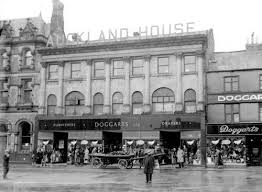 So, a decent crowd of 21,237 (3,000 more than turned up at Highbury for a First Division game with Norwich City (presumably Rupert and Monty had not latched on to football at that time), sacrificed their Friday night out and came to see a Sunderland side that was sitting on the edge of the promotion places under boss Ken Knighton. 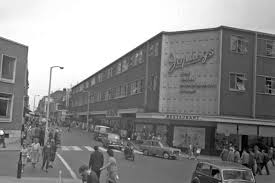 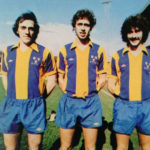 There are some interesting names in the Shrews side. Ian Atkins joined us a couple of years later and did very well at Roker. He was not a wonderfully creative player, but one of those who dug in and worked hard. He became a manager and was renowned for turning out rather dour, unexciting teams. He and David Moyes must have got along well at Gay Meadow.

Full back Tony Larkin became the first full time director of the England Blind team and was awarded an OBE in 2016 while the two Jakes played over 450 games for the Shrews between them. Paul Maguire made over 100 appearances for each of three clubs all in the same area – Shrewsbury, Stoke City and Port Vale.

Our side was a good one. Elliott, Arnott and Rowell, the three who had almost kept us up two years previously, were still there. We had paid £350,000 for former Ferryhill Comprehensive schoolboy Stan Cummins and Pop Robson was thoroughly enjoying his second spell at his home town club. And then there was Claudio Marangoni…….

Ken Knighton was keen to explore the newly opened foreign markets. He had almost signed a Yugoslav, Bozo Bokota, but that deal fell through due to work permit problems.

He tried to prise Argentinian Alex Sabella away from Sheffield United but Blades boss Harry Haslam wasn’t having any of that. However, he did direct Knighton to Spurs manager Keith Burkinshaw who had extensive knowledge of the Argentine market. He said that he would have taken Marangoni had he been able to but there were only two foreign players allowed in those days – will Brexit see us revert to that? Knighton flew out to watch him playing for San Lorenzo where he may well have bumped into a young priest by the name of Jorge Mario Bergoglio, who has gone on to bigger things in Rome. He liked what he saw, offered Marangoni and his club a deal and the gangly Argentine arrived on Wearside.

By the time of the Shrewsbury game, he had played in a home win over Cardiff City and an away draw at Watford. He clearly found it hard to settle and was not used to opposition players getting at him straight away. His first touch was not great but his passing ability was impressive. Unfortunately, his team mates had difficulties in working out where to go and he quickly became disillusioned with life and football in England.

He grabbed his first Sunderland goal in this game, opening the scoring in the 28th. minute but we failed to build on it and Maguire levelled in the 62nd. It took a late winner from Kevin Arnott to tie up the win, maintain our place on the edge of the promotion race and send us into the Boxing Day clash with Wrexham in good spirits.

Marangoni stayed for less than a year and was a bit of a disappointment. He scored a fine goal at Fulham to give us an important 1-0 win and an even better one in a 3-3 draw at Cambridge United in March in an absolute cracker of a game which saw us concede twice in the last nine minutes. I remember being quite annoyed at that game and using language that would not have gone down well in the Senior Common Room at Caius and Gonville. (Don’t know about that – these public school, red brick university coves know some choice words – Ed) 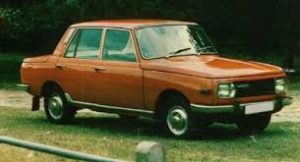 I also remember a former colleague, the late Bill Maughan, a lovely man, arriving late because he had been sat outside Cambridge City’s ground for an hour waiting for the gates to open. The lack of Sunderland supporters in the vicinity caused him to ask a local what had happened and was told that he was not the first person to go to the wrong ground. He pointed his Wartburg Knight (an upmarket Trabant made in the DDR) in the general direction of the Newmarket Road and arrived just before kick off.

Marangoni’s impact in Division One was minimal and he moved back to Argentina and San Lorenzo’s fierce rivals Huracan for a short spell before spending five years at Independiente and two at Boca Juniors. He also played for the national team alongside one Diego Armando Maradona.

While at Independiente he set up a soccer school to the dismay of his team mates who believed that the ability to play football well is a genetic gift and cannot be taught. Claudio got that move right and he now owns a business that deals with over 10,000 students directly and another 100,000 in community programmes, preaching the philosophy of “embrace the ball”.

Perhaps some of our current players could follow that advice.

1 thought on “The First Time Ever I Saw Your Team: Shrewsbury Town”