Pete Sixsmith‘s stroll through his programme collection pauses to reflect on a good win in a good season. It was also the  year in which the club celebrated its centenary, though the pages of the match day programme for Watford’s visit offers no hint that a telegram from the Queen has been received at Roker Park … 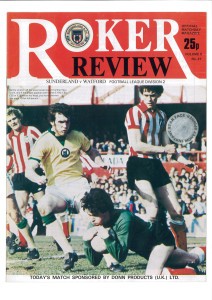 For our next trip down Memory Lane (always a far nicer place than the present) we go into the 1980s, a turbulent decade for Sunderland fans.

We started it in our 100th year as a football club, winning the old second division and almost becoming an established top flight side before a bitterly disappointing League Cup Final defeat and a subsequent relegation back to whence we came.

It got worse. We thought we had found a quick route back to prosperityville when Len Ashurst was replaced by Lawrie McMenemy, a successful manager at Bishop Auckland, Doncaster Rovers, Grimsby Town and Southampton – and an absolute bloody disaster at Sunderland.

Like Steve Bruce and Danny Graham, he was brought up a black and white. Unlike those two, he was never pilloried for his boyhood allegiance – he was just seen as hopeless.

We ended the decade back in what was coming to be our natural home – the second tier. However, we had spent one season in the third tier and had clambered out of it thanks to Dennis Smith, a man I consider to be one of our better managers over the last five decades of suffering, er watching, Sunderland.

However, it is to the centenary year that I have gone for this selection. It is April 1980 and we are pushing for promotion. We had started slowly, but never lost touch with the pack (remember, we are still on two points for a win) and we were on a good run.

Since losing 3-1 at SJP on New Years Day, we have taken 22 points out of 30. A Stan Cummins goal gives us revenge over the team who will in future years be forever known as the Horse Punchers and then we have two never-to-be forgotten wins on successive days at Wrexham and Shrewsbury, the time of the Great Wem Camping Trip of which I have written before.

As usual, we get a wobble and manage a draw at home to Orient, before a late goal by the flying plumber, Barry Dunn, salvages a point at Eastville, one time home of Bristol Rovers.

Going into the Watford game, we were third, with ourselves, Leicester City, Birmingham City and Chelsea chasing the available places. We had the biggest crowds (average around 26,000) and there was a solid determination from Ken Knighton that his first season in charge would be a good one.

The board had backed him and he had brought in Chris Turner to compete with Barry Siddall for the keeper’s jersey and, over the season, funds were freed to bring in John Hawley, Stan Cummins, Claudio Marangoni and Joe Hinnigan.

In addition, local lads Shaun Elliott, Joe Bolton, Rob Hindmarch and Kevin Arnott were regulars as were imports Steve Whitworth, Jeff Clarke and Mick Buckley. Most of the Clock Stand Paddock regulars agreed that it was a decent team and that there was no reason why promotion should not be achieved that season.

Watford were hanging around in the bottom third of the table, clear of the relegation zone and just waiting for their summer holidays. They had three former Roker favourites in their squad in Mick Henderson, Wilf Rostron and a man who had experienced the previous promotion, Ray Train.

A crowd of 32,195 congregated at Roker on a beautiful Spring day. The game was on Match of the Day and we did ourselves proud, giving the Hornets, who included a young Luther Blissett, a walloping by five clear goals.

Pop Robson, in his second spell with the club got two, Mick Buckley a hard working midfielder brought to the club by Jimmy Adamson from Everton, got one and Shaun Elliott slid in two beauties at the Fulwell End to give us a great win and keep us in third place.

It was such a good performance with the team functioning like a smoothly running machine. Elliott’s two goals were superbly taken and he looked so happy as he took the congratulations of his team mates. At least one fan decided that his first born would be called Shaun – if he were a boy. The future looked bright.

The week after we took 12,000 fans to Cardiff and came back with a point after Robson grabbed a late equaliser. Some fans, frustrated about delays at getting into Ninian Park, pushed at a not very secure gate and clambered over a turnstile to get in. But due to other results, we slipped down to fourth and had to win our last game.

This was a Monday night fixture against a West Ham United side who had beaten Arsenal to win the FA Cup on the Saturday. 47,129 squeezed into a creaking Roker Park to see Kevin Arnott and Stan Cummins send us back to the First Division, and give a fitting end to the Centenary Season. Indeed, this was such an important night that Madame Salut attended – and has not been back since.

The programme was continuing to develop. It cost 25p for 16 pages and there was some decent reading in it. Ken Knighton “said” that “the promotion pot keeps bubbling and boiling” and bemoaned the fact that Shaun Elliott had been suspended for the previous game at Bristol Rovers – the first Sunderland player to be banned that season.

There was an interview with a tousled haired Kevin Arnott who “never ceases to be amazed by Terry McDermott” and who reliably informed the readers that he nearly joined the “enemy”.

Directions were given to Ninian Park (333 miles) and there was a feature on a Sunderland fan who was working in the Antarctic and kept missing James Alexander Gordon on BBC World Service. He could receive one telegram a month (younger readers, ask your dad) in a world without texts, satellite TV or broadband. How did we survive?

Advertisers were more in evidence, with Donn Suspended Ceilings taking a whole page, Vaux putting out a full team of beers and our Saab friend Les Allen, who had added Honda to his portfolio and was trading from his new premises at Harbour View.

The season ended in success for Knighton, but he was sacked in March 1981, with the club involved in a desperate relegation struggle. Some things never seem to change.

12 thoughts on “The History Programme: (3) Sunderland sting Watford Hornets, Blissett and all”