In the fifth and final part of his look at programmes from a lifetime supporting Sunderland, Pete Sixsmith brings us into the 21st Century with his reminiscences of a season many of us would prefer to forget. When Fulham visited on the 4th May 2006 for the final home game that season it really looked as if supporters would witness an entire campaign without seeing a victory at the Stadium of Light. 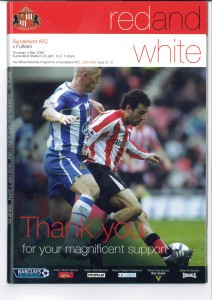 And so we arrive in the last decade in our look at the last fifty years of supporting Sunderland. As usual, it proved to be an up and down one, with relegations, promotions and near misses. It also provided us with possibly the poorest team in the club’s long and glorious history – that of the infamous 15 point season.

Under Mick McCarthy we had won the Championship the previous year with a team that was put together to do precisely that. Dean Whitehead, Liam Lawrence and Stephen Elliott were perfect signings and they all played major parts in our fourth second tier title.

But when it came to the top level, they needed support if we were to make a success of it. Unfortunately, what little cash was made available to the Barnsley Bruiser was not spent on proven top level players and that support was not forthcoming.

Look at the players who came in. Kelvin Davies who was very quickly nicknamed “Calamity Kelvin” by the much missed Dave Lish.

Then there was Jonathan Stead, a centre forward of some potential at Huddersfield Town, but who had failed at Blackburn Rovers. However, Mick decided to blow a third of his budget and give the man who grew up playing Rugby League a second chance. He didn’t score until April 1st. Everton were the fools that day.

Nyron Nosworthy was picked up on a free from Gillingham. He was a great character and had a brilliant season the following year under Roy Keane, but he struggled in this team. His 60 yard back pass at Middlesbrough which ended up as a corner had Mick scratching head, chin and a*** in bewilderment.

On the eve of the season, in came Andy Gray from Barnsley to spearhead the attack. He scored on his debut (pen against Charlton) and that was it. No more goals and eventually he was shipped out on loan by February. His performance in the Cup defeat at Brentford was as inept as anything I have ever seen in a Sunderland shirt.

Our third “forward” – using the term lightly – was loanee Anthony le Tallec. The young Frenhman had been signed by Gerard Houllier and was shipped out to us to gain experience. He had loads of ability but his commitment and heart were in direct contrast. Still, he scored more goals than Stead and Gray put together – a grand total of 6 to ranking him alongside names like Brian Clough, Len Shackleton and Kevin Phillips as a season’s leading scorer.

Tommy Miller had arrived from Ipswich Town and became “Mr Anonymity”, looking every inch a Championship player. Nice lad, good trainer but totally out of his depth in the Premier League. He is now at Swindon Town – guess who signed him!!! 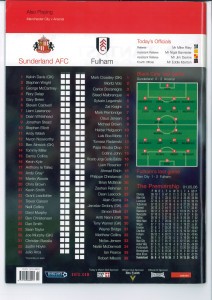 Justin Hoyte, on a season’s loan from Arsenal, was one of the few players who improved as the campaign rumbled on. He had played in successful teams all his life until he pitched up at Sunderland. He almost became a legend when he put us ahead against the Mags, but the defence had its usual stinker and they scored four – even Chopra got one. He must have got a good price at Corals.

During the season, we brought in Christian Bassila, a French journeyman who like Baldrick’s war poem, started badly and then went downhill and Rory Delap who never once took a throw in, although he did score a splendid goal at Everton.

The season started badly with a 3-1 home defeat to Charlton Athletic, with a certain Darren Bent bagging two of them and we never looked like dragging ourselves out of the mire. By the time the Fulham game came around for the second time, we were one game away from going through an entire season without a home win.

I say again, because the original game on Apil 8th had been abandoned after 21 minutes due to a combination of snow and rain. At the time The Cottagers were a goal up thanks to Brian McBride and looked the more likely winners. 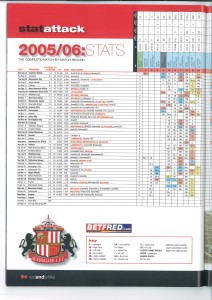 They clearly didn’t fancy a return to Wearside and went two goals down to strikes from Le Tallec and Chris Brown before Tomasz Radzinski pulled one back. Memory serves that Davies had a decent game that night against a team that featured Steed Malbranque and Wayne Bridge, one of whom a few years later made a significant contribution to SAFC and one who didn’t.

The whole sorry farrago ended a few days later at Villa Park and we had grave fears about our club’s future. And then, along came Niall Quinn and the Drumaville boys and the rest is history.

I chose this programme because it did end a traumatic season for us and also because of the date of the game. I spent my next “work” day making the Ferryhill students write the date at every opportunity, which just goes to reinforce the view that I am among the saddest of the sad.

It’s also a very good example of the excellent programme that Rob Mason and his team now produce. Priced at £3.00 there is sufficient reading in it to sustain a lengthy bus journey home. Alas, the local adverts were a bit thin on the ground – The Fry Fry in Bridge Street had closed down by then and Reg Vardy had gobbled up Byers Dunn Turvey, but there is an interview with former Bishop Auckland Grammar School lad Les Wood, a Red and White of my vintage and all round good egg.

And that, as they say, is that. I hope to have revived some memories, both good and bad and look forward to welcoming Fulham and their 25 travelling fans to the Stadium on the 17th.of next month. I suspect the Cottagers’ team will be more readily identifiable than our lot!!!

Finally a word of thanks to Keith Scott, a good friend an even better Sunderland fan for the loan of the programmes.

6 thoughts on “The History Programme: (5) Fulham’s record breaking visit to the Stadium of Light”