In the league table of human wickedness, the Poznan mockery by Sunderland supporters – after Manchester United lost the title in extraordinary fashion despite beating us on the final day – is lower than the Inquisition, the Holocaust and 9/11. It’s not even as bad as singing ‘you’re s**** and you know you are’. But there are those from Manchester and many, many more from hotbeds of United suport in SE Asia, the USA and Woking who took it as a glaring example of Man’s inhumanity to Man. Scott the Red*, a good friend to Salut! Sunderland, was so upset he wants us to go down. Since he also believes we make too much fuss about diving, we may conclude judgement has deserted him. Scott, the brains behind both the Republik of Mancunia site and the all-club By Far the Greatest Team blog**, expects revenge on Saturday (as if United needed a trivial grievance to be favourites) …
Salut! Sunderland: The first Manchester derby of the season brought you last-gasp victory. What is your assessment of the way it went?

Obviously the result was what we wanted and to win it in injury time was brilliant, but I was really pleased with our performance and the way we approached the game. Ferguson bottled it last season at the Etihad by looking for the draw. The team selection and formation showed we meant business and we were rewarded for that. If not for the linesman disallowing Young’s goal at 3-0 and not spotting Toure’s foul on Evra on the box, we could have had a real thrashing on our hands.

What is it like to have such intense rivalry again without having to look outside Manchester towards Liverpool or London?

I thought it would be a lot worse than it has been to be honest, particularly when they won the league. I don’t know many City fans though so maybe that’s why I’ve escaped it. It’ll never be like the rivalry we have with Liverpool, pure hatred, because at least they’re Mancs too.

And how were the bragging rights manifested after that 6-1 drubbing last season (obviously adapt to take in any serious thumping, either way, on Sunday)?

City fans celebrated the anniversary of that game on Twitter (http://www.byfarthegreatestteam.com/posts/happy-61rthday-why-im-embarrassed-to-be-a-manchester-city-fan-today/) and in a banner they have at their ground celebrating being champions they incorporate the 1-6. It’s pretty small time for fans of the champions. It was a bad day for us though, there’s no escaping that. It’s forgotten we were only 1-0 down before we went down to 10 men in the first minute of the second half and in the 89th minute it was a fairly respectable 3-1. Instead of shutting up shop, as any sensible team would have done, we kept pouring forward to try and get another goal instead of acknowledging that the game had gone.

We must be approaching an anniversary – third, fifth, tenth? – of the first time someone asked whether it was time for Sir Alex Ferguson to retire or stand aside. How much longer will he continue to dismiss such thoughts?

He doesn’t seem ever to get bored managing a team that pretty much expects to win everything in sight. Could you stomach supporting a useless or just ordinary club?

United has been in my family for generations. My dad was going to Old Trafford when we became the first English club to win the European Cup and a few years later he was watching us in Division 2. Since winning his first trophy with us 1990, Ferguson hasn’t gone longer than one season at a time without winning something. I know I’m totally spoilt by that and the expectation I have at the start of every season is to win the league. But essentially, your team is your team. I’m just fortunate that my local team is one of the best in the world!

I have never hated Manchester United, as you know from our many exchanges, but many do. Has the despicable side of Chelsea or the limitless money of Citeh deflected such hatred to any extent you have noticed?

To a certain extent, yes. Whilst nobody likes the team at the top, I have had conversations with rival fans who at least seem to appreciate the way United have been successful, even if that doesn’t necessarily make them like us more. City and Chelsea don’t bring through players and they do little for developing English talent. Five players in our squad on Sunday came from our youth team (six if you count Rafael da Silva who signed for us when he was 16) and 10 were English. City didn’t have any former academy players in their squad and just three were English.

Who are the greatest players you have seen, or wished you’d been around to see, in United colours and who should have been allowed nowhere near them? 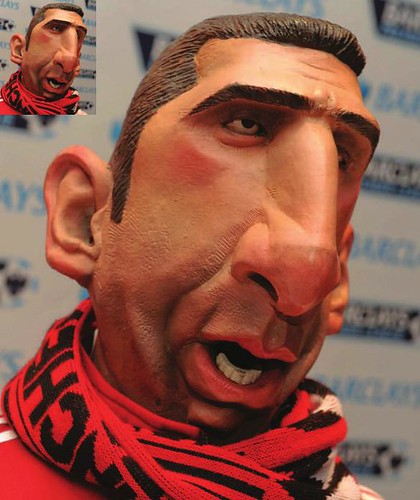 Eric Cantona is the most special United player I’ve seen. He made things happen and inspired our team to greatness. Who knows what would have happened to those kids that Hansen said wouldn’t win anything if in their first season they failed? Cantona saw to it that we won the Double in their first season in the first team squad and that impact is immeasurable. Ryan Giggs was an incredibly exciting players. It’s easy to forget how skilful and fast he was. Cristiano Ronaldo was something else, particularly during that 07-08 season. If he didn’t score two goals in a game you’d think he’d had an off day. Roy Keane was immense. Ferguson once said that Keano wasn’t the fastest player but if you put the ball down in training he was the fastest to it. That sums him up. He was a brilliant captain. The best footballer is Paul Scholes though. Without question. Sir Bobby Charlton, who got to play alongside the likes of Best and Law, said Duncan Edwards was the only player who ever made him feel inferior. He was only 21 when he died. You can only imagine what kind of player he would have become.

Wes Brown, John O’Shea, Phil Bardsley, Fraizer Campbell – and, of course, Keano, Bruce, Welbeck, Evans, Louis Saha, briefly Andy Cole and Dwight Yorke, er Bellion in the past. Rap my knuckles now if I’ve overlooked others but what do you make of the United-SAFC connections?

I used to have a bit of a soft spot for Sunderland, being honest. It wasn’t just that so many of our ex players went to Sunderland, but so many players we had a strong connection with. You’ve had loads of our former youth team players, you’ve had two of our captains as your manager, and our Treble winning strikeforce. But after your fans celebrated City’s title win last season, I don’t have much time for Sunderland. In all honesty, I hope you get relegated… and that Wes and O’Shea go to the other United graveyard, Everton.

And how lucky were we to avoid Darron Gibson?

He seems to have done alright for Everton. He was never going to be good enough for United but he’s got the right mentality. He really wanted to make it at United though so stayed longer than he should have. He’s only two years younger than Rooney but in terms of his development, he’s at least 10 years behind. He’s only played 69 league games which is nothing for a player of his age.

You see Pete Sixsmith’s wonderfully entertaining gloom each week at your By Far The Greatest Team site – how do you rationalise the Sunderland woes he has the duty to describe?

It’s a strange one. You’ve spent a lot of money, you’ve got a decent (although massively overrated) manager and plenty of experience in the squad. I don’t watch any of your games, only read about them (thanks to Pete) so I’m probably not best qualified to judge.

Will United bounce back/now go on to win the title again this season? Champions League? And what about those petty little doemstic cups?

I think we’ll win the league every season. The odds are against City because it’s so rare for a team that isn’t United to retain the title. As for Europe, I wouldn’t say our squad was anywhere near good enough. But watching Chelsea get battered game after game and still win it should give faith to every club still in the competition.

So, the top four in order, and who’s going down and – unless just mentioned! – where SAFC will finish?

Diving: Rooney is often accused, even SAF found it hard to defend Young, Suarez is almost a pantomime act and every club has ’em: Ridgewell (WBA), Osman (Everton), Torres (Chelsea), Bale (Spurs) and name your own Sunderland culprits (I recall a certain suspicion about Bardo from the season before last). Should we just stop caring?

Yes. I can understand the anger when a player dives against your team and it costs you, but it’s time for people to get over the rage. Players cheat and when your team benefits, it would be rare for fans to get worked up about it. Retrospective punishments would help sort it but those at the top don’t seem to care too much about it… unless it’s Eduardo, for some reason.

What single development would make football seem more in touch with ordinary supporters?

It’s probably gone past that point now, hasn’t it? Making tickets cheaper. They cope just fine with it in Germany. Would love to see standing sections back too.

** He is also responsible for the relatively new blog that reaches out to fans of all clubs, By Far The Greatest Team which, once it breaks into profit, will doubtless be paying Pete Sixsmith handsomely for reproducing his incomparable Soapboxes.

49 thoughts on “The Manchester United ‘Who are You?’: go down, Sunderland, for Poznan stunt”