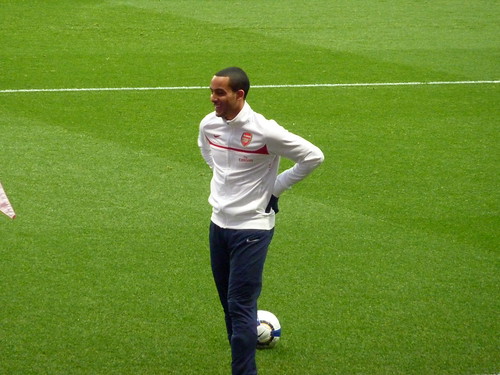 In it, he offered fulsome apology to both managers, Arsène Wenger and Simon Grayson, for what he admitted was a blatant dive intended to gain a penalty. I am unaware of any doubt – or was, until tonight’s comment from a Leeds fan (see below)! – about the spot kick he did win a little later and which brought the equaliser.

This is what young Theo said:

“I want to apologise to the managers because I actually dived. I was trying to win the penalty. I said to one of their players ‘would you have done it?’ and he said he probably would have.

I am not the sort of player to do it, but I own up to it and apologise. It is something I don’t want to see in my game. I have heard some players say ‘if there is a slight touch, go down’ and it can work both ways.

It was one of those things. I am not happy with myself for doing that, but I am happy that we got the draw.

I had a little joke with the referee afterwards saying ‘that was my first dive, can you tell?’

I don’t have to own up to it and I can’t speak for other players, but I have just expressed how I feel. I hope people respect that.”

And respect him I most certainly do.

Salut! Sunderland has laboured long and hard in the cause of stamping out the cheating that pollutes the modern game.

Arsenal are not especially in our sights as targets. Some clubs, some players are more guilty than others but the scourge of cheating – diving, feigning injury, badgering referees to show yellow or red cards to opponents – is rife at all levels of football.

But we managed to appal Gooners last season by posing the Eduardo Question in each of our regular Who are you? features in which a fan of our next opponents talks about the forthcoming game, his or her club and football in general.

“Last second of the last game of the season. It’s goalless but only a win assures you of the title/a European place/staying up. One of your players goes down and gets a penalty even though everyone in the ground except the ref knows he dived. You score and win. You take it gladly, you take it guiltily or you’re so ashamed you almost wish you’d only drawn and missed out?”

Now that Eduardo has gone, Arsenal fans presumably accept that the theatrical gesture that inspired the question, at home to Celtic, was a dreadful dive after all. And they can hardly complain if I now name a related question – essentially, is it time to stop caring about fair play and accept cheating as the norm? – in honour of one of theirs.

I would love Walcott’s statement to lead to a new mood throughout football. It won’t, at least in the short term.

But it has changed the debate. To my knowledge, he is the first player at such a high level to make such a confession. His own actions clearly embarrassed him. He is contrite, and wants cheating to play no part in his game.

So far, so good. But then we learn – yes, I suppose we knew but now all doubt has been removed – that other players tell him to go down at the least contact in the hope of deceiving referees. Meaning, presumably, that they do so, too.

We are not told what proportion these cheats represent, but can assume it is widespread. And they do it so automatically that they don’t even take the trouble to conceal their dishonesty. And we can also assume that in most cases, they are behaving under direct or implicit instructions from their managers.

It is no good telling ourselves it is worse abroad, or that it wouldn’t be so bad here were it not for all those Johnny Foreigner imports. In what is otherwise a glowing display of decency and candour, Walcott’s disclosure of the cynical attitude of fellow professionals gets close to challenging the will to go on enjoying football.

Or as the wording of my Theo Walcott question suggests may be the case, have I simply got it wrong? Am I old-fashioned, naive and unrealistic in wanting to rid the game of the cheats?

I shall go on asking the question each week and I’d be interested to see a range of view expressed here.

But I’ll end for now with the way in which my Tottenham Hotspur previewer, Jim Duggan, the founder of topspurs.com, deals with the issue in this week’s Who are You? (due to appear here on Thursday) …

Q This was the Eduardo question and is now the Walcott question. Theo publicly admitted to a blatant dive in an (unsuccessful) attempt to win a penalty and said players had told him to go down at the least contact. Commendable honesty, or a sign that it is time to abandon high-minded principles about cheating and accept it as part of the modern game?

A Cheating goes on and it spoils the game, but then again it reflects the society in which the game is played.

Next Post
Pity Wolves: from lip-licking predators to howling failures