Pete Sixsmith salutes a reasonable if losing performance at Spurs (though M Salut thinks he was unduly impressed by O’Shea), but then admits he has been looking at the fixtures. It gave him a nasty bout of nerves for Sunderland’s immediate future …

The new manager, I suspect, will have learned a lot more from this defeat than he did from last weekend’s helter-skelter victory.

I am sure he will be sat in his office, musing on a number of things that will make him realise that he has a difficult job to do with the team he has inherited from Steve Bruce.

We did not play badly. We held a good Spurs side for much of the game and created a few chances of our own. But, when the chips were down, we gave away a goal and failed to take full advantage of the chances that we had.

The best chance fell to Jack Colback in the 58th minute. He was clear in the box, but decided to switch the ball from one foot to the other and the chance went. A little over a minute later, another poor clearance from Wes Brown was picked up by Van der Vaart, he played a quick ball through to Pavyluchenko and we were a goal down.

We worked hard to pull it back, but Spurs were stronger and better than we were and the points were lost. But, we can take some positives from this.

First of all, Titus Bramble was excellent at the back and gave Adebayor absolutely nothing. His heading, tackling and distribution were at the level he set at the beginning of last season. Hopefully, he will continue to excel for us this season.

Secondly, David Vaughan had another very busy game in midfield and in the first half pushed Scott Parker deeper and deeper. Vaughan faded a little in the second half, but looked comfortable in his role and I would imagine that he now has a good opportunity to claim a regular first team place.

What he does need is somebody with pace and determination to push the ball through to. At Blackpool last year, he had Dudley Campbell and the under-rated Gary Taylor-Fletcher, to get on to the end of his shrewd and careful passes. He has nobody this season. 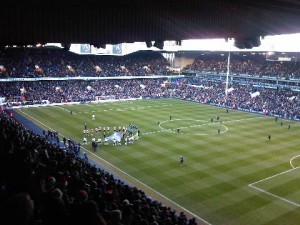 Connor Wickham led the line well, giving the experienced Gallas a tough time, until he was injured. He may be able to take advantage of Vaughan, but not if he is battling away on his own. Fraizer Campbell should benefit from the Welshman’s sharp passing if and when he returns from his serious injury.

Wickham’s injury led to Nicklas Bendtner arriving on the scene, clad in metaphorical sackcloth and ashes after his exploits in Newcastle City Centre. His long and rambling apology had clearly taken up a lot of his energy as he did little to hold the line together and continued to wander out on to the flanks and away from the ball. I can see this loan move ending in tears.

Other than that, nobody was disastrous (O’Shea did well and looked steady throughout) but we hardly troubled Spurs. Apart from Colback’s foot switching episode, the only other real chance we spurned was when Larsson’s cross was just behind Kieran Richardson.

I’m going to annoy Pete Horan by saying this, but I thought Kieran had a good game and can see him taking the Sessegnon role behind whoever plays up front at QPR on Wednesday. This would allow McClean to start – we need some pace down at least one of the wings and he is all we have to supply it. Sessegnon had a disappointing game and was easily marked out of things by the much bigger Spurs defenders.

As for Spurs, they have a chance of the top four. Missing Bale and Defoe, they seemed sluggish in the first half, but they have strength in depth, with Pavyluchenko, Krancjar and Pienaar on the bench, three attacking players who would look good in red and white striped shirts.

I remain to be convinced about Scott Parker’s credentials as the Greatest Living Englishman, but he did push forward in the second half and played well enough. Modric is always a threat, but Adebayor was well held by Bramble. I chuckled when the crowd gave Bendtner stick for being an Arsenal reject, but cheered Adebayor and Gallas, both of whom spent time at Ashburton Grove, if my memory serves me correctly.

The league table and the upcoming fixtures do not make pretty reading. We are still heavily involved in the relegation zone and our lack of fire power is worrying. A visit to QPR is a tricky one, but we need to start winning away games (home ones as well) and the new management team will be learning all the time. But we really need to put one over Messrs Warnock and Barton on Wednesday.