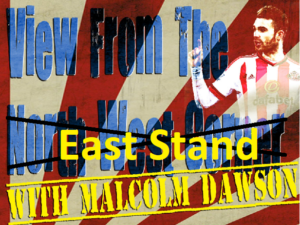 I went along to this game not sure as to what I was expecting from the match. I don’t put too much store in pre-season friendlies but it’s an opportunity to look at our new signings and perhaps gain some insight into how the team will set up for the first few fixtures of the new season.

The visitors finished last season in mid-table in the Dutch Premier League and so offered a decent standard of opposition, but with another closed doors friendly against our non league neighbours from down the coast scheduled, this wasn’t going to be the last chance some players had to work on their match fitness or to put the manager’s ideas into practice before the real games start next Saturday.

Thankfully the monsoon type rain which I had been looking at out of my window all morning had abated by the time I got to the ground, though it was still mizzly and dull. My first thought as I took up my seat was just how much better the stadium was looking than it was a year ago with the red and white seats pristine, in contrast to the awful pinkness that had reflected the fading of the club’s fortunes.

The second was that the dimensions of the pitch had been altered again. 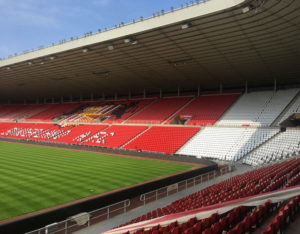 Last season Jack Ross had widened the playing surface, reversing Simon Grayson’s decision to bring in the touchlines but it was clear from the markings that the playing surface was now about two feet shorter and six feet narrower. I can’t really believe that such miniscule changes really affect a team’s performance to any great extent, but someone, somewhere must have a theory. Either that or the groundsman wants to make the linesmen run on a new bit of grass!

I was there early enough to watch the players come out for the warm up. It’s a danger jumping to conclusions but as my eyes scanned the 17 outfield players going through their stretches and small sided activities I wondered if the personnel in any way reflected the manager’s thinking as to his best starting XI, did it perhaps hint at possible departures, or was this just another opportunity for him to look at the new boys and to assess some of his fringe players? Noticeable by their absence were Honeyman and McGeady (no surprise there as both had well documented injuries) Wyke, Watmore and Maguire. Where were they?

It was later made public that Wyke has an ankle injury and Watmore a tight hamstring and it was also hinted that Maguire was not 100% but will probably feature against Hartlepool. That explains it then, though I have to admit it crossed my mind that with a large squad it wouldn’t surprise me to see a few departures other than Bryan Oviedo, who we may actually be paying to leave, so great is the need to reduce the wage bill. It has been suggested that the club is having to operate a one out one in policy but with Cattermole and Oviedo off the wage bill it could easily be two out and ten in.

And so to the game itself.

For the first ten minutes or so I struggled to focus on the match because of the numbers of spectators who decided that they would wait until kick off before finding their seats. It wasn’t just a few either, but when I did get an uninterrupted view it looked as if we were playing a kind of flexible four at the back formation. Conor McLaughlin, Willis, Flanagan and Hume formed the back line, but with the full backs pushing forward at any opportunity, Leadbitter or McGeouch would drop back and fill the hole between the two centre backs.

Gooch started on the right wing, Kimpioka on the left and Embleton in support of Grigg with keeper Jon McLaughlin completing the line up.

To be honest it was a fairly lacklustre game and the first half passed with little of note. Kimpioka, who looks lively but doesn’t seem to me to be ready to push for a starting place yet, had a decent shot from outside the box which the keeper dealt with comfortably enough. There was a bit of a goalmouth scramble, when McLaughlin C had an effort headed off the line then saw his follow up palmed away by the keeper.

Apart from that, Grigg was quiet, Gooch was quiet, Embleton was quiet. McGeouch was quietly efficient and Leadbitter did what Leadbitter does. The new boys at the back did well and Flanagan seemed composed alongside Willis. Hume was OK but had a few shaky moments defensively and his attacking threat was marginal. He blasted a shot off target when perhaps he should at least have forced a save out of their goalie.

Meanwhile at the other end the visitors created a couple of chances but nothing that McLaughlin had any difficulty with. None of our boys did anything horrendous but neither did they look that threatening. It was an all round 6 out 10 performance.

Early in the second half Hume played a good through ball to Kimpioka who burst into the penalty area and with us all willing him to bury it, he checked back and the chance was gone. It was the sort of opportunity that you would have fancied Maja to put away 9 times out of 10 last season. Not long after the gangly Swede hassled the defence and the ball broke to Leadbitter whose decent long range effort was well saved.

McNulty came on for Kimpioka and immediately got into the game.

He looked lively and made some decent runs, once or twice getting into positions where he could threaten the visitors. He’s not the biggest of players but plays well with his back to goal if the half hour or so he played last night is anything to go by. He may be able to bring out the best in Will Grigg who appeared to lack any enthusiasm for the job in this game. I still fancy him to come good, but he probably needs a goal or two to relight his fire. He nearly got one when the ball broke to him on the edge of the area, but his shot on the turn found the side netting. However it was close enough to have me off my seat in celebration, until I realised it had slipped the wrong side of the post.

A shame for Will Grigg but it was also the kind of chance you would have fancied Maja to put away 9 times out of 10 last season.

The visitors had almost taken the lead earlier when skipper Daniel Hoegh headed wide from close range when it looked easier to score than miss. But they did get the only goal of the night when Hicham Faik rifled home an unstoppable bullet from thirty yards or so. Not much anyone could have done about that and it was reminiscent of Chris Maguire’s rocket against Southend last season.

Our other new outfield signing, George Dobson came on and was immediately involved. He looks to have a bit of pace and the same youthful energy and enthusiasm that Luke O’Nien shows. O’Nien had replaced Gooch, which suggests that he could well be in line to start in that wide right midfield role, at least in some games. Max Power and Alim Ozturk also got a bit of game time.

To be honest this was no classic and hardly memorable but I won’t complain for a fiver, though I will have a moan about those around me who decided to start leaving ten minutes or so before the full time whistle. With a crowd of just over 6,000 and the town quiet, despite the airshow, there was no real excuse to leave early, except perhaps force of habit. The 50 or so Heerenveen fans were applauded for their support and stayed long after the final whistle to acknowledge their team.

Before getting down to write this I looked at today’s crossword and initially was flummoxed as I scanned the across clues, but then it all started to fall into place and I had completed it before I finished my second mug of tea. And I learnt a new word – schwa which is the uh sound in the middle of words. Let’s hope that crossword’s a metaphor for the upcoming season and our performances all fall into place after a lacklustre pre-season and I’m not left scratching my head muttering “uh?” over missed opportunities on too many occasions in the coming months.

Roll on next Saturday and Ha’way the Lads.

Highlights and apparently (if you can face it) the whole ninety minutes are available via www.safc.com

2 thoughts on “View from the East Stand: little to be gleaned from Heerenveen defeat”