Manish Patel* is a man on a mission. He has already raised £1.200 of pounds for Children in Need, by running hundreds of miles, and has set his heart on piling on those sorts of pounds for the charity with four full marathons and a total of 1,000 miles this year. See his page at justgiving.com. In between times, he loves sport and is a passionate West Bromwich Albion supporter. We can hardly begrudge him his joy at Albion’s progress underTony Pulis – or blame him for fearing Sunderland haven’t much hope of avoiding the drop (we get the same feeling every season) …

Salut Sunderland: The Baggies have had a quietly but seriously impressive season, winning important games and up to eighth with four points in hand as I write. What has been going right or is it all a fluke?

Manish Patel: It has been a decent season for sure and if at the start you had offered me eighth going into January’s fixtures, I would have snatched your hand off. To be where we are in the league and behind the top six and Everton is impressive and you have to take your hats off to everyone at the club. I am expecting to see some fresh faces coming into the Hawthorns this transfer window. It was disappointing to go out of both the League and FA Cup competitions at very early stages and to lower league opposition but that’s the way it goes sometimes.

Tony Pulis doesn’t appeal to all neutrals and even divides supporters of teams he manages, but he does get results. Do you feel he now has the right balance of making WBA hard-to-beat but also playing decent football.

The one result I feel that kick started our season was beating Leicester City away. That game was the perfect example of us getting the balance right of being hard to beat and looking a threat going forwards. Ever since that game we have not looked back.

I would be right in saying that Pulis has had his critics among Baggies fans but now I feel the fans are slowly starting to take to him. The fact that we are now starting to play decent football as well as making ourselves hard to beat, the fans are starting to appreciate that.

And will he get you a taste of European competition?

It will be a tough ask. I guess the first target for Pulis and the players will be to get to 40 points. Then they can look at our targets for the remainder of the season. If we have serious ambitions of getting into Europe, for sure we would need to strengthen our squad in January with quality rather than quantity.

Rondon, Brunt, Phillips, Chadli … who among them or the rest of the side would you single out as the most influential players in your impressive first half of the season?

For me the one player that stands out is Jonny Evans. To bring him to the club for around £6m was a snip and he has been a rock at the back for the Baggies. He has always delivered, whether that would be playing at centre-back, left-back or defensive midfield. He is a big loss to the side when he is not in the starting XI.

And where do you hope to have strengthened between now and when we play, or at least before the window closes? Will you lose Berahino and do you any longer care?

Come the end of the window, I would like to have seen West Brom bring in a left-back, midfielder and another striker to ease the burden on Salomon Rondon who has excelled in his second season at Albion.

Regarding Saido Berahino, for me he only has himself to blame. Sounds harsh and I accept that he hasn’t been the same player since the 2014/15 season and Albion rejecting bids from Spurs for the striker. But even so, he should have put his head down and let his football do the talking rather than venting his frustration on social media. 10 years down the line when he looks back at his career, I hope for his sake he does not have any regrets.

We never seem to do well at your place, but there’s plenty of rapport between the two sets of supporters. Your thoughts on Sunderland – the club, the fans, the city, the region, David Moyes?

It has been a very tough season for the Mackems and I fear the second half of the season could be a real struggle. Unless Moyes is backed this month to bring in players, I could see Sunderland going down which would be a real shame.

You just wonder though, it could be a whole lot worse if they didn’t have Jermain Defoe in the side. I haven’t seen much of Sunderland this season but on the occasions I have, defensively they have been woeful and shipping in too many goals.

Click anywhere on this paragraph for the West Bromwich Albion vs Sunderland: Guess the Score – whichever side you want to win – for a chance to win of these mugs

Name the best players you’ve ever seen in Albion colours

What have been your highlights as a Baggies fan?

One was the Great Escape in the 2004-05 season. No one gave us a prayer in staying up after being bottom at Christmas that season. But yet we still survived and for sure that final day of the season was a nerve-racking one.

Beaten in the Championship Playoff final at Wembley by Derby County in the 2006-07 season.

This season: name the top four and bottom three:

Now tell us all you want about your challenge – what you’re doing, why and to benefit whom?

After running 540 miles for Children in Need in 2016, this year I will be running a total of 1,000 miles – again for Children in Need – including four full marathons with the first one on April 2 at the Manchester Marathon. 2016 was a great year and having initially completed my 500 mile challenge with a month and a half to spare, I decided to extend it by another 40 miles and was able to raise over £1,200. And not forgetting I completed my first full marathon at the Wolverhampton Marathon.

I feel proud knowing I contributed to a record breaking total raised for Children in Need in 2016. Watching the appeal night really did bring home the difference your donations can make to help improve the lives of young/disadvantaged children in the UK.

There were so many tearjerking and heartbreaking stories shown on the appeal night and it put into perspective the challenges so many families shouldn’t have to face. By taking on the 1,000 mile challenge, I want to continue to inspire young/disadvantaged children in the UK to never give up in life. Children may have a disability but that shouldn’t stop them from going onto succeed in life. No one should be afraid to follow their dreams. 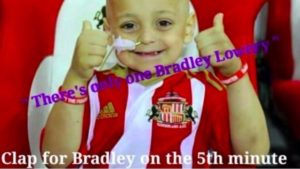 It is children like Bradley Lowery I want to help inspire to never give up. Bradley’s story has touched me and millions of people out there and it is heartbreaking what he and his family have had to go through. No child should ever have to go through what Bradley has been through and no child should ever have to struggle in life. We are all right behind Bradley in his fight against neuroblastoma.

As part of my challenge, I will be running four full marathons in 2017: Manchester – April, Liverpool – May, Wolverhampton – September and Birmingham – October. They are going to be tough for sure, but if you want something in life, you have to work hard, believe in yourself and never give up.

Back to football: should we stop bothering about diving and other forms of cheating, so widespread had have they become,  or keep trying to stamp them out?

There is simply no place for cheating and diving in football and you have to look at ways to try and stamp it out. Whether that would be bring in video technology to help referees get more decisions right, giving the managers a challenge each half where they can question an incident they disagree with and giving suspensions to those who have cheated to win decisions.

One  step the authorities need to take to improve the game or the experience of ordinary supporters?

This will sound obvious but make the experience better for ordinary supporters and make it affordable in these difficult economical times. You look at what they do in the Bundesliga where your ticket includes travel arrangements, matchday food as well as the game. Why can’t we do that in the UK?

I won’t be at the game but I’m predicting 2-0 to the Baggies.

Manish Patel on himself:  I am 27 and currently work in communications/PR. As well as following football, I’m also keen on other sports including cricket, Formula One and Tennis. And of course I’m into running. I have been the following the Baggies for 20 years and I would be right in saying there have been plenty of highs and lows.

Next Post
West Bromwich Albion vs Sunderland Guess the Score: can we, will we?