There has been an interesting “Do we like Sunderland or is it just because of Keano?” debate running at the Irish football site eleven-a-side.com which some of you will have seen. 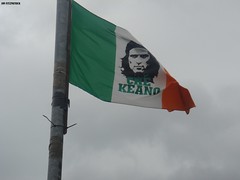 A quick scroll down the comments field left me with the impression that the present, growing level of Irish support is not destined to last.

There are plenty of people with soft spots, a smattering of SAFC fans weighing in but also a good deal of candid admission that once Roy Keane moves on “to a bigger club”, “allegiance” to the Lads will instantly be dropped.

Let’s leave aside the phrase “bigger club”. I think they mean Man Utd, though most of us would naturally question either the adjective or the noun (bigger brand would work fine and raise no eyebrows here).

But we are all pretty realistic about Keane’s commitment. He’ll cut his managerial teeth with us – has done – and try to make something of our return to the Premiership. And eventually, the heart and size of the job will probably lure him back to Old Trafford. I have more respect for him to believe it will be any worse than that, but have no idea when it will happen

That doesn’t mean we should resent the fair weather Irish folk who support us now……..

Football is full of people who support the wrong team or the right team for the wrong reasons.

The right reason to support a team is that you were born or grew up in the town, city or area in which they play, or that your links are so strong (born in the Home Counties of Mackem parent/s would be a good example, and there are many of those) that any other choice would seem unthinkable.

In the case of Sunderland, the catchment area has always been immense, stretching throughout the towns and villages of County Durham, into the Tyne Valley and so on.

I was born in Sussex, was moved to the North East – Shildon – as a baby and have links galore with the region, Sunderland included. My father, who served as secretary of Shildon AFC in the Northern League, took me to see SAFC at Boro, when Brian Clough scored the only goal (for us, not them) and I was hooked. I look for Shildon results, as I do for those of several other clubs, but the notion of a second team escapes me.

The Irish are different. North and south, they have always – if they follow football and do not stick rigidly to Gaelic sport – had their preferences in the English and Scottish leagues. There was – is? – a thriving Man Utd merchandise store in Belfast city centre and the population’s religious/political split produces lots of Celtic/Rangers and Liverpool/Everton rivalry.

Sometimes, reasons for supporting a team are less easily defined. A Protestant Belfast taxi driver once told me he followed Rangers, which I expected to hear, but also that he was also very fond of Sunderland “for Charlie Hurley”, which I did not – though I suppose it was at least encouraging in terms of sectarian stereotypes.

Some years ago, driving around an estate in Portadown in journalistic pursuit of a man suspected of being a mass murderer, I saw a small boy playing in the street wearing not just a Sunderland top, but a brand new away top. I felt safer continuing my search for the killer than stopping to inquire further.

Then there was the cameraman playing in a media five-a-side game in Belfast who also happened to be wearing a Sunderland top. “You a fan then?” I asked. “No, just liked the top,” came the reply.

But aside from the Keane loyalists adding their comments to eleven-a-side.com, there are in fact many Irish people who have always held something of a light for the Lads.

The brilliant folk singer and all-round showman Christy Moore is one – though his first love, in England, was Leeds. But I can recall meeting many more. They’ll still be rooting for us if and when Keane departs, and of course there is still likely to be a strong Irish connection thanks to Niall Quinn and Drumaville.

As for those who are not, I am content to welcome them now, pretty much as honorary fans, and to accept that the nature of Irish football support places a natural limit on the durability of their affection.

5 thoughts on “When smiling Irish eyes flatter to deceive”

Next Post
Up up and…a way of staying up