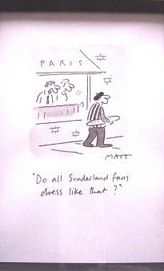 Salut! Sunderland is always happy to help out when other clubs’ fan sites come calling. Russell Wilson, who is part of the team at the QPR Report Blog, posed a few questions ahead of tomorrow’s game. Pete Sixsmith is better at these things but Monsieur Salut did the honours for once …

How long have you supported Sunderland?

Pretty much all my life since boyhood in County Durham – always a big catchment area for Sunderland – so a long time indeed. I did have a very brief flirtation with Peterborough United as a kid, when they were storming through the non-league and then lower reaches of the Football league, but otherwise Sunderland through and through.

How did you get to your blog? Has it evolved how you would of expected?

I started blogging when working for The Daily Telegraph in Paris, kept it – http://www.francesalut.com – as my own thing when made redundant and then launched Salut! Sunderland as an offshoot. It was a simple hobby at first but has grown in remarkable fashion and I am now quite proud of it even if it will never make me a proper income. 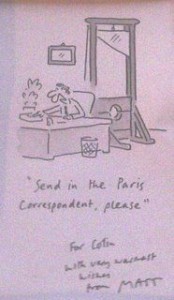 Who are Sunderland?s biggest rival (or rivals) and why? (Have to ask!)

I cannot think of any. Hartlepool maybe or Darlington. Never even think about Middlesbrough if that’s who you had mind. Oh yes, there was another team, wasn’t there? Len Shackleton once said:”I’m not biased when it comes too Newcastle United. I don’t care who beats them.”

Are you happy with your team and how things are to date? ? What are your opinions on your new manager O’Neil? And of Steve Bruce? His summer dealings?

Steve Bruce deserves credit for achieving a 10th top finish but has rightly been criticised for allowing top players, especially strikers, to slip out of the club without adequate replacement. He was also less than convincing in tactical awareness and had little instinct for changing things effectively during games. Summer signings were a mixed bag but I do value some of the people he has brought to the club (not just in the summer), eg Sessegnon, Vaughan, Wes Brown (jury still out on O’Shea) and Westwood while Wickham and McClean are great prospects. That said, he was judged on results and they were abysmal, so I welcome O’Neill’s appointment. He inherits a half-decent squad but has plenty of work to do.

What do you think of your current Owner? WHY is he involved? What do you expect from him?

I loathe corporate football but we’re all stuck with it. Ours is no worse, indeed he is many times better, than most owners. He was right to give Bruce time to turn things around, right to sack him when no improvement seemed likely, right to be moving away fans to a less prominent position (where their empty seats won’t make the ground look half empty!) and right to have the club’s interests genuinely at heart.

How do you think Sunderland treats its fans? Appreciates them? Listens to them? Screws them?

The usual mix of good and bad. Some excellent community initiatives, including cut-price deals for kids, decent involvement with the city and surrounding area – and contempt for independent voices of support (gripe, gripe). But that reflects football, not specifically SAFC.

We have been unable to score goals, which is hardly surprising since we have one recognised Premier standard striker, Bendtner, and he is just on loan – and a couple of promising kids. A midfielder, Seb Larsson, is our top scorer and he is very dangerous from set pieces. Sessegnon has great skill. Our “Egyptian Beckham”, Elmohamady, has been a huge disappointment.

Are you happy with your youth set up? Is your club doing enough to bring young/local talent through the ranks?

The Academy is good, has produced some real gems – Jordan Henderson, obviously, and now Ryan Noble – though the question throughout the English game is always whether promising youth can make it at the highest levels.

Who would you say was the greatest Sunderland player that you yourself personally saw? And past player? (You can name more than one if it’s that close!)

Charlie Hurley was incomparable at centre half, a rock in defence and always a threat at our corners. Brian Clough was a wonderful goalscorer, Jimmy Montgomery a fabulous keeper. For sheer pleasure, I will never forget the goalscoring of Kevin Phillips and the magical partnership with Niall Quinn that did so much to make it possible.

What is your prediction for Sunderland this season?

I though we’d match or improve on last season (10th) but our dismal start has left a lot of ground to make up and we are not even out of the wood yet. I will stick my neck out and say, with hope in heart, 10th again. But it is a big ask.

Are you aware of any player or manager links between our two clubs past and present?

I am useless on these questions until it’s too late, when they all come tumbling back. Does Venables refusing to come as manager count? Or my daughter having played for QPR Ladies, though just after the team that took part in Bend It Like Beckham? 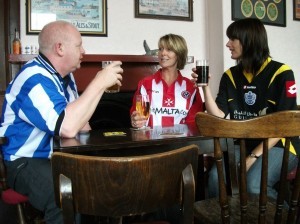 See also: The QPR “Who are You?”. Steve Colwell says pay the divas and divers less

What is your view and the general Sunderland view of QPR and of Neil Warnock and our owners?

I have always quite liked QPR, especially living as I do in west London and even more especially since they are not Chelsea, for whom I have always had an irrational dislike. I have seen us win, lose and draw at Loftus Road. Warnock’s a character; owners, as mentioned already, are owners. I cannot be too critical of what has happened at Man City and once (still?) looked like happening for you since we’ve had our wealthy saviours, too, and the fan who says he wouldn’t want it for his club is probably a liar.

Who(if any) is your most memorable/favourite QPR Player over the years?

Any memorable matches between our two clubs that stand out for you? And the reasons why?

1999, the year we took the second tier by storm. Remembered for Kevin Phillips coming back from injury and scoring a wonder goal, Kevin Ball being sent off wrongly (the card was rescinded), you taking a lead and Quinn heading an equaliser in the 100th minute of stoppage time. At least that’s how I recall it.

What, realistically, do you think Sunderland are capable of achieving in the next five years?

If we meet the owner’s target and establish ourselves as consistent top half finishers, with maybe a sniff at the League or FA Cup, that would suit me. Of course I’d love Champions League football, but I would never lose sleep about not being a top four club. Apart from when Peter Reid brought us seventh top two years running in the Premier, my best moments as a Sunderland fan have mostly been in promotion seasons.

3 thoughts on “Who are we, who are our rivals? QPR ask the questions”

Next Post
Our man at West Ham isn’t coming back: Christmas here early