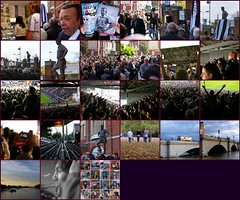 Fulham vs Sunderland mosaic
by… JonHall

As we approach Tuesday’s vital return to Premier football, Fulham have a clear psychological advantage. While we pottered to a dull 0-0 draw with Blackburn, with them having the better chances and both of us now facing our fifth encounter of season, Fulham won a place in the 5th round, albeit by beating modest opposition in the form of Kettering Town.
They’re also rather higher than us in the league, even though just about everyone who saw the first game between us, at Craven Cottage, seems to agree that we were by far the better side and should have won.
Strange club, Fulham. When Salut! Sunderland can actually find a Fulham fan to preview a game, we get great stuff; witness Joe Jenkins’s piece ahead of that first game and Steve Battams‘s offering last season. But it has been a long search for anyone to have a go before Tuesday (though we did have a promise of photographs from Jon Hall, who will be among what will surely be a tiny band of away fans making the trip).
There was silence from Vital Fulham, although the Vital network had produced good responses for both the Villa and Blackburn games, and other approaches drew a blank. So was it a bit of a collective “BOG OFF MACKEM!”, to quote one Fulham soul, “Al Billy”, in his reply to a similar request last October for a witty or wise Fulham fan to write here?
Not quite. Fortunately, Steve Battams* – who chalked up 550 games in his own semi-pro playing career, Staines Town, Ashford Town and Carshalton Athletic – was willing to stand in as supersub and return to these pages with his updated thoughts. Steve likes our front two – let’s hope they still ARE our front two when the transfer window closes – thinks we’ll stay up and would settle for a draw on Tuesday. Over to him…..

Salut!….Looks from here as if Fulham are having a better season than most would have expected. Does that sum up how you feel?

Steve… Pretty much, although the way we played our way out of trouble last season under exceptional pressure gave me hope for the start of this campaign. It is clear that Roy Hodgson is an experienced coach who gets the best out of the players available to him and I hope this continues.

Is the progress, from last season’s narrow escape, down to the manager, certain keys players, a bit more luck on your side or a mixture of all three?

Yeah, all three I guess. As I mentioned the manager has got the team organized and playing to a rigid 4-4-2 where every player knows their job. Key players for us have been down the spine of the team – Schwarzer, Hangeland, Murphy and Andy Johnson. When you go to places like Villa Park and Anfield and get goalless draws you need an element of luck but the work rate of the side has earned the points total we have achieved so far and that has something to do with the run of form we have been on.

Were you surprised to see Roy Keane walk away from Sunderland? Is our own struggle much what you thought would happen?

Keane comes across well on camera and seemed to be saying the right things. However, he is a loose cannon (prawn sandwiches, Alf Inge Haaland episode and the McCarthy World Cup fall out for example) and he I felt he was always liable ‘to do a Keegan’ when the going got tough and so it proved to be.

Names this season’s champions, and the three to go down.

Any memories, handed down or otherwise, of Johnny Haynes and other Fulham greats?

Johnny Haynes was my Grandma’s (god bless her soul) favourite player and I remember him walking out on to the pitch many years ago (during the nineties) and she stood and clapped him for about 10 minutes! I said ‘ you must have loved him grandma’ and she said he was her favourite. There is now a fantastic statue of the great man outside the Stevenage Road stand which was opened last year. I would loved to have seen him play as all the great players from that era rate him alongside the best midfielders of today.

What about players and staff who have links with both of our clubs? Lee Clark springs immediately to mind – did well for us, considering he is a committed Mag, but left under a cloud (because he’s a committed Mag!) – but there many others: Paul Bracewell, Andy Melville, David Healy…

I thought Paul Bracewell was fantastic for us considering his age when he came to our place – great work rate and positional sense. Melville was steady as was Lee Clark who I thought we might have kept as a coach. Healy didn’t get a consistent run in the side and I am not sure if he is Premiership quality to be honest.

Do Chelsea make you sick, or are you far too grown-up for that kind of thing?

Too grown up really although I love it when we put one over on them, especially the last minute equaliser in the 2-2 draw after Christmas. I like the fact that they have a core of English players and would give anything to have Terry and Lampard at Fulham.

You seemed destined for great things when Fayed arrived with all his money. Was survival each season, in the end, all you could realistically expect or are you disappointed not to have made a bigger impact?

I guess when you look at the overall scale of the big four teams mid-table positioning was the best we could hope for. Fayed has now been trumped by Abramovich, the QPR mob and Mansour now and they aren’t guaranteed any success. Chelsea have ploughed millions in to the squad and they still cannot get to the holy grail of the Champions League so it shows you how hard it is even when you have a bottomless pit of cash.

Club vs country. Who wins for you, and why?

Club, going back to the UK at Christmas and watching us beat Boro 3-0 made me realise how much I miss watching Fulham and having a day out with my family. I do love watching England still though.

Score next Tuesday? Have you been to the Stadium of Light and will you be there for this one?

I’ll take a draw now (after our dire showing at West Ham) – your front two are lively. Never been to the Stadium of Light – it’s too cold for us southern softies up there isn’t it?!

* Steve Battams on Steve Battams (taken from the description he provided last season….):
My first Fulham match was a 5-0 win against Southend United and from then on I was hooked. My granddad has been a Fulham supporter all his life and my brother and I have followed suit. We have been there through the bad old days, being one game away from relegation out of the league to the dizzy heights of the Premiership and Al Fayed’s millions. We have visited some glamorous and not so glamorous venues along the way from the Emirates Stadium to Millmoor, Rotherham. Due to my own times as a player I have had to cut down my visits to Craven Cottage over the past 10 years but I still get the same buzz walking over Putney Bridge and down the Fulham Palace Road to what I consider the home of football. I miss the old terraces, now replaced with seats of course, but you can still feel some of the atmosphere of the old days when we used to turn up expecting defeat week in week out!! Being in the Premiership is great and you appreciate it more as a Fulham supporter, given the tough times we have had to encounter in the 80s and 90s.

Next Post
Who are you? We’re Blackburn Rovers (yet again)