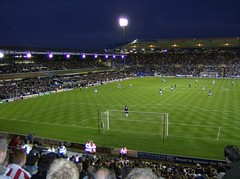 In it together, but seeing things differently
Picture: krisread

As the goals went in last night, the text messages from St Andrew,s dried up. Several minutes after the final whistle, we were still trailing 1-0 according to my mobile phone, the normally reliable Sixer’s Sevens service having gone AWOL.

There’s always BBC Radio Newc**tle. Down in my den at home in the south of France sit two computers. The older, cheaper one inexplicably gives clearer, louder reception while the commentary on the newer model is a few seconds ahead. I chose the slow but audible oldie.

Talk about people attending the same games and seeing different ones. It took me back to careless driving cases at Bishop Auckland Magistrates’ Court, when one motorist would swear this happened as vehemently as the other claimed the opposite.

To Gary Bennett, a passionate Sunderland ex-player and fan whose summaries I enjoy and respect, we were “not at the races”, “probably didn’t deserve a draw”, “got out of jail”. For him, the positive was that we’d avoided defeat despite playing woefully.

Hence the gloomy tone of my running updates on Salut! Sunderland as Sixer’s Stand-in.

I cannot recall it all word-for-word, but it went from something like “0-1…poor marking…playing badly” to “Chopra out of nowhere….” to “Chopra leveller not enough” to “Chopra, John steal draw from drab performance”. All based on the critical but realistic sounding comments of Gary Bennett.

Finally, Sixer’s verdict arrived, not once but twice: “Thoroughly deserved. Chopra’s now one of us.”

And looking at some of the messages on the Blackcats loop overnight, there is more of the same, by which I mean more disagreement.

* (From Andy in Melbourne) A good point in the end but I was expecting more to be honest. A few
lightweight performances, again upfront we struggled but some of the
service was shocking. Gordon again had very little to do apart from pick the ball out of the
net. A couple of times as balls were floated into the box I was
expecting him to come but he didn’t. No issues caused but I was
expecting him to come. Could be harsh and ask where he was for the first
goal. The ball travelled a long way but can’t picture where he was
positioned so not sure!!!

* From Neil Chandler Decent point. We closed down well, we deserved the draw. No-one
outstanding. No-one terrible. Both teams could have won it. The draw was
the fair result. Brum run and close as hard as we do. Looking at the other Prem highlights tonight, several of the goals come from a lot of space that we have so far denied teams, which is promising.
Our second conceded goal was the first time we had really been pulled out
of shape, and McShane committed himself a little to softly. But that was 1
mistake in the whole game. Overall – well done.

There’ll be more to come, there and elsewhere.

Nick Alexander, at the offical club site, thought a draw was about the right result. though Sunderland would feel they ought to have had a penalty for a clear push on Connolly. His counterpart at the Birmingham city site complained that Stern John’s late equaliser followed an equally clear foul on the Blues’ keeper Colin Doyle.

At the new HawaytheLads site, happily up and running after teeething troubles, Andy Dawson noted a minute into added time: “A reversal of February when they nicked the point at St. Andrew’s in February. A minute left. I’ll take a point now.”

So does it make me feel less hostile towards the Sunday Telegraph’s Duncan White, whose judgment on the Spurs game was scathing? Giving the match 1 out of 10, he wrote: “This was a dire game. For all the hype about the importing of big-name foreign talent this was British football at its worst, scrappy and technically inept.”

Well, he is entitled to his view and I would indeed be less hostile had not the Telegraph website moderators so prissily disallowed my response along the lines that the match report was crass, but typical of the kind of thing supporters of unfancied teams expect when they come up against fancied teams and ruin the script.

Of course, thin skins and sense of humour breakdowns may have had as much to do as prissiness with the resulting censorship, since I also light-heartedly added the thoughts that standards had clearly slipped since I left the Telegraph and that people would be better off coming to Salut! Sunderland‘s impartial view of the world.