Colin Randall writes: football clubs that ban journalists or their employing newspapers, agencies or TV/radio stations usually look faintly ridiculous. It is not the job or duty of news organisations to kowtow to authority. I could also tell stories about ministries, companies, charities and other organisations that shamelessly break their own embargoes (eg to ensure a ‘big hit’ in one chosen media outlet). But if The Sun broke an agreed embargo on team news, as opposed to finding out about it by proper journalistic inquiry (‘proper’ would take a few pages of Salut! Sunderland to discuss), then SAFC has a point. They – by extension we – are engaged in a desperate battle against a potentially ruinous relegation and a reporter who disregarded a clearly agreed embargo would surely be naive not to expect consequences).

Nic Wiseman, co-founder and co-editor of the much-missed 1990s fanzine It’s The Hope I Can’t Stand (ITHICS) and @ithics1 at Twitter, offers his own thoughts …

There’s a lot of hubris and backpedalling going on by journalists from The Sun (I hesitate to say) newspaper over being banned by the club. Let’s get the facts.

David Coverdale, not the frontman of the ageing rockers, Whitesnake, but North East football reporter for The Sun, tweeted the team for the midweek Liverpool game at 2pm on Wednesday. Very early to get the team news.

The club, smelling a rat, banned the paper from all football-related briefings until the end of the season. The paper’s Manchester football reporter, Neil Curtis, decried the club’s ban “for correctly predicting the team against Liverpool”.

Predicting, eh? Then The Sun starts to get in a lather about what actually happened. Coverdale has tweeted that he didn’t guess the team, but “didn’t say that it was given to him from someone from the club”. Sounds a bit like “I did not have sexual relations with that woman” to me. If The Sun is as innocent as it claims, why have all the original tweets been deleted (as a gesture of goodwill is, according to the Roker Report, the paper’s explanation – ed)?

From the club’s perspective, it might seem rather petty to ban a newspaper for writing the news. But the paper broke an embargo, whichever way you look at it. Dress it up in semantics if you like, but it’s still a betrayal of confidence. 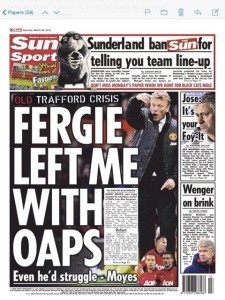 Coverdale attempted to justify his actions by claiming he received no complaints from Sunderland fans when the original tweets went out. Yes, everyone is always keen to get a bit of inside information, but this has given the competitive advantage to the opposition. Though luckily, so many Liverpool fans already boycott The Sun because of its disgraceful coverage of the Hillsborough disaster, that they may not have seen it.

I can’t condone any kind of censorship, but the whichever way The Sun dresses it up, it betrayed the club’s trust in an attempt to get ahead of the game. No doubt when the dust settles, there will be some resolution, but the paper will have to behave itself in future relations with the club.

And there’s still the issue of a potential mole within the club, which is not a good situation.

Far from “for bringing North Korea to the North East” in the words of Mr Curtis, this strikes more like Orwellian doublespeak to me.

3 thoughts on “Wise Man Says: ‘it’s The Sun wot got its just desserts’”