John McCormick writes: Pete Lynn, aka Wrinkly Pete, adds his words of wisdom to the piece I put up 24 hours ago. I almost titled this “A Quick One”, given that Pete is partial to his music and it’s quite short. However, I decided to stay with something more in keeping with Pete’s message, which comes as a timely reminder of the part we fans can play:

Don’t give up/Your team needs you

Click on the title and listen to Peter Gabriel and Kate Bush whilst reading.

I guess I am not alone in still feeling stunned by our performance last Saturday. My own view on the reason for our poor defending is that it was as much to do with our set up as it was individual errors. If you play with a midfield four made up of mostly attacking players, you cannot also allow two of your back four (the fullbacks) to maraud forward since the midfield players have neither the skills nor inclination to cover them.

I am also (as a wrinkly) still coming to terms with the actions of a few Coventry “fans” hell bent on spoiling everyone’s day, including that of the travelling support. It must have detracted from the euphoria of such a win to know what the lowlife journeying with them had done. 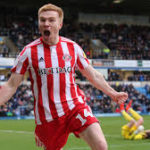 Enough looking back, let’s focus on the reality of where we are and the next five games. We have got ourselves into a position where, if we win our remaining fixtures, we go up. We have had some bad luck with injuries which have robbed us of the services of genuine match winners like Watmore and Maguire. We have had to make do during the season with the losses of (by my reckoning) twelve of our first choice personnel to lengthy injuries. We have also lost Maja, who is still our leading goalscorer. Despite those setbacks we have stayed in touch throughout with whichever team has led the division.

We can do it again. What do we have to lose? The managers tell their players “leave everything out there on the pitch” so there are no regrets. If any one of our fans returns home Friday night without being hoarse they will not have done their “everything”. Don’t give up and don’t let up.

Roar your hearts out for The Lads

“A Quick One!” video published on YouTube by Grafietstift October 2008

“Don’t give up” video published on YouTube by Peter Gabriel, 2012.

If there is any copyright claim on any of these videos please let us know and we will acknowledge or remove as requested.

Next Post
Sunderland vs Doncaster Rovers Who are You? Let’s hear it for Zeke