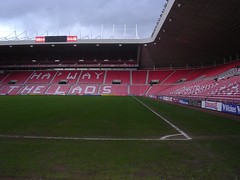 Too many empty seats
Picture: Alice

0-0 at home to Palace, an obvious game to win and 3-0 would have taken us sixth.

That means the players didn’t do well enough. And we slip back to ninth instead.

And, of course, there were fewer than 27,000 in the Stadium of Light for the game. After back-to-back victories, a dismal turnout.

That means the fans didn’t respond to Niall’s plea, despite signings that show his and Roy Keane’s ambition – and despite the real prospect that we’d end the night in a play-off place. Did the fans simply know they’d be let down again, or have they stopped caring?

At away games, the support remains as good as it gets. So what will it take to get the home fires burning again? As an after-thought, written in mid-February, you could say that a great away victory – something like 2-0 at Plymouth, he added with the benefit of hindsight – might help……………