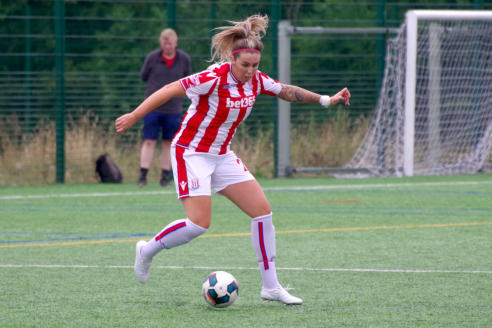 After the news that the FAWNL ended the season early, due to the corona virus outbreak. I was in contact with Stoke Ladies forward Faye McCoy, to find out more about her and Stoke Ladies, who’ll look to push for promotion next season.

McCoy joined Stoke Ladies five years ago. It was a move that provided a jump to a higher level from the league below. Prior to that she had been out of the game due to injury. Her successful return from injury resulted in an approach from Stoke Ladies to join them for pre-season training and she already knew some of the squad, helping her to settle in.

McCoy has been a student of the game from an early age. She was like a training partner to her brother Andy, who was also a good player. She followed him everywhere and her love for the game blossomed from there.

The conversation moves to the past season and the challenges she has faced during it. She ponders this and answers ‘I’m very critical of my own game and give myself a hard time. After moving to the role of centre forward, it was a new challenge, however I want to be the best in the position I play’. When discussing the challenges the team faced, it came as no surprise when she mentioned the table toppers. ‘When you play Sunderland Ladies, it’s always a hard battle. They are a great side and play brilliant football.’

When assessing last season, the striker counts her two hat tricks and finishing top goalscorer as her stand out moments personally. She describes her main strengths as her physicality, her constant communication with her teammates and as supporters of the women’s game will know, creating and scoring goals. I ask her if there are any players that she models her game on? ‘I played with some great players during my career. When I played centre midfield, I liked Fara Williams, also Kelly Smith. In the men’s game I always liked Steven Gerrard and Thierry Henry.’

So what are the ambitions for her and Stoke Ladies next season. ‘Can I and the team be better than last season. Can I score more goals than last season and can we finish higher in the league.’ She is obviously a popular member of the squad. She spends time with teammates Cassie Hyde and Amy Hughes when she’s away from football. ‘I think I know a player in every other team. I’ve been in the game a while. I know a lot of players at Blackburn.’

When asking her to pick a 5-a-side team, in which she must include herself, she goes for her pick of the best in the league. Goalkeeper Charlotte Clarke (Stoke City), Keira Ramshaw (Sunderland), Ellie Gilliat (Derby County) and Cassie Hyde (Stoke City).

Working, playing and training means the players live a busy lifestyle. How does the Stoke goalscorer relax outside of the game. ‘I like a good spa day every now and again, spending time with family or watching Netflix.’ I want to find out who the joker is in the dressing room as the girls have such a good team spirit. ‘Ha, unfortunately that’s me. I’m the class clown. Nicola Hudson is a bit of a clown as well, she’s always winding people up.’

As the season ended so abruptly, I’m keen to know the training programmes they have in place for next season. ‘We have a quarantine special that’s been sent to us.
It keeps us ticking over in these crazy times. I’m sure we’ll have an interesting pre-season training programme coming up in the next few months.’

Which players has she found it tough going against this season? ‘Both Keira Ramshaw and Mollie Lambert of Sunderland Ladies are both great technically.’

I’m also keen to know who she sees as their promotion rivals for next season. ‘We have a tough league now and after what has happened this year, every team will be raring to go and will have upped their game. I think going off performances this season, Sunderland will be up there again.’

Stoke Ladies get great support from their male counterparts. ‘We train at the men’s academy at Clayton Wood, which is a brilliant set up. We do joint appearance days with the men, to promote the club. Hopefully the more success we have, the more backing we’ll receive. That’s what we’ll be striving for next season.’

To finish up, we turn our attention to Faye the football fan, such is her love of the game. ‘My love for Everton is like no other. Ha, I blame my Grandad for all of my years of hurt. If you were to cut me, I would bleed blue.’

She loves football and she’s a player that’s causes all manner of problems for opposition defences. That’s something Sunderland Ladies and the rest of the league will have to be well aware of when the new season kicks off. 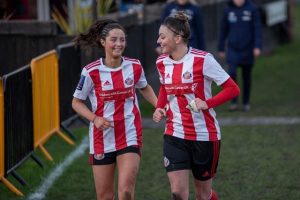 Getting to know the lasses – Neve Herron