I caught up with the talented Rosie Axten of Derby County, for a chat about her and her thoughts about all things football. Derby are so lucky to have a player of her quality. So how did she come to be playing for the Rams.

‘I was playing for Coventry and it was quite far to travel for me, whilst also working a lot. I wanted to enjoy it again as much as I could, so I wanted somewhere closer. I knew a few players who were at Derby. I knew what the set up was like and I knew it was the right team for me and my fun’.

Rosie has been in the game for a long time, considering her young age.

‘I always played football with the boys at school. I played for Leicester City centre of excellence since I was nine years old and it always meant so much to me. I don’t know what I’d do without it. It’s just part of me’.

She’s had some tough tests this season.

‘Coming into a new team half way through a season, was a challenge. Then for the season to get cancelled, due to the corona virus was hard. I was so focused and now I’ve got to wait until next season to put the Derby shirt back on. I want to start from where I left off and just smash it’.

She had some great moments last season. I ask her to talk me through what immediately springs to mind for her.

‘My first goal for Derby, against Middlesbrough. It was a great feeling. You always remember your first goal for a club. It just felt so natural for me to be in a Derby shirt. I know it’s the first of many to come’.

She has so many strengths to her developing game.

‘I have a confident strike on me. I’m strong, physical and love a good battle. I love to beat players and pick out good passes. I like linking up with other players and playing to their strengths’.

Our conversation turns to players she admires in the game.

‘Ronaldo, he’s so skilful and full of surprises. Vardy, he gets in great positions and a fantastic goalscorer to watch and learn from. Rooney, I’ve always enjoyed watching him since I was little. He’s scored some screamers and is a standout player for me’.

She’s ambitious when it comes to both her and the future for Derby.

‘We want to win the league and get promoted to the championship. We want to keep growing and improving as a team. We have the players and ability to achieve’.

So how is she coping with the challenges that footballers are facing, in these difficult times?

‘I’m doing a lot of long distance running, sprints and also weights at home. I want to keep my fitness up for when football returns. I’m doing ball work and keeping sharp’.

She’s a driven and focused footballer. How does she switch off?

‘I’ve been watching Waterloo Road, watched Toy Boy and now Normal People. They’re all really good. I normally like to socialise with my friends, going out for meals and desserts. I love a good dessert. I like going to the cinema. I can’t lie, I also love a night in watching a movie and a good old face mask’.

Let’s hope Rosie can get back out playing football and seeing her friends, as soon as it’s safe.

We chat about what she’d like to see happen to increase growth of the women’s game.

‘I’d like to see the game keep growing. I’d like to see more teams have a link up with the men’s clubs. At Derby we’re lucky, we’re most certainly all together as one club. It’s such a great feeling. Having more people watch the games, would be great too. So it can continue growing the women’s game’.

She’s so busy that she probably doesn’t have much time for other sports.

‘If I’m not at football, work or the gym. I don’t like to sit around. I like to keep myself as busy as I can. If I did have time, I wouldn’t mind trying a bit of boxing’.

I wouldn’t be surprised if she was good at that as well. She’s a great talent and somebody Sunderland Ladies and the rest of the league will have to watch closely next season. Stay safe. 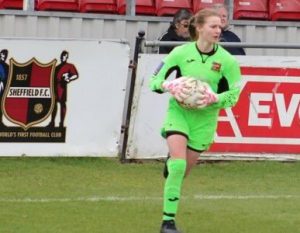 Serena Clarke – Sheffield FC – Getting to know the opposition