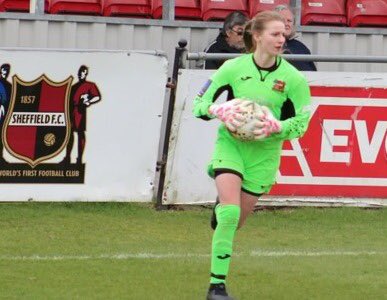 In the next of my series ‘getting to know the opposition’. I speak to goalkeeper and young outstanding prospect Serena Clarke from Sheffield FC.

So what was her passage to playing for one of Sunderland’s league rivals?

‘I actually joined them in April 2019 and played four games to finish off the season. I was at Leicester City, but both keepers were injured at Sheffield and they were in a relegation battle. At the time that was one of my hardest decisions, whether to stay with Leicester or finish it off with Sheffield. Luckily I chose Sheffield and loved it, so decided to join them for the 2019/20 season.’

I was really interested to find out how the young stopper got into football?

‘I have an older brother and he played, I went to watch him regularly as my Dad was manager of the team. I played at the side of the pitch whilst the game was on, and loved it. I then went to summer camp and I’ve never looked back since.’

Our conversation turns to the challenges of the most recent season.

‘One of the biggest tests has been motivating the team through games. In some of the games this season, we didn’t get the results we wanted, and after conceding a lot of goals it’s easy for our heads to go down. So sometimes it was hard to find the words to keep the team going. Also, it was a tough battle for the number one shirt. At one point in the season we had five goalkeepers challenging for the one spot. I’d just come back from a few weeks out, after suffering a wrist injury. It was a test because I spent a few weeks sitting on the bench. It was ok because our team spirit is high and I just wanted what was best for the team. I wanted to support them despite not being in the starting line up. It made me fight for the shirt.’

So what stood out for the young prospect last season?

‘It has to be Sunderland away. Although the result didn’t go our way. I felt we won in my eyes. The fact we lost 6-1 against them just a few months prior, we worked away. Although we lost 3-0, with some questionable decisions, we showed how far we’d come as a team.’

After seeing her in action in the Sunderland game, I’m well placed to know the many strengths of this talented young keeper. I ask her what she’s see as her best qualities on the pitch?

‘My speed, I like to play as a sweeper keeper behind my back four. If the ball goes past them, I’m there to get it. My speed really helps with this. Also, I’m a good communicator, even though I could still improve this. I like to be as involved as possible in the game. I like to encourage the team when they are doing well. I know my defenders like to hear me behind them. It helps with both mine and their game.’

For a bit of fun, I ask who her three favourite keepers are?

What are her ambitions for the season?

‘We want to do better than we did last season. We’ve been in a relegation battle for the past two seasons. We’re better than that. We want to get Sheffield back to where they belong. I want to keep working hard and cement by place as number one next season.’

We chat about her friends in the game.

‘I’ve played in quite a few teams so I’ve got friends from this league, and the leagues above and below. I can honestly say from football, I’ve made some of the greatest friends that I’ll keep forever. At Sheffield we’re close, we all get along and our team spirit is high and I speak to most of the team regularly outside of football, even though we have busy lifestyles. Sheffield are massive on the one club approach. I don’t just speak to the first team players. I’m friends with many of the development girls too. I met my bestie Milly Wortley at the club.’

I ask her to pick her league best 5-a-side team, with her in goal?

Our league is getting better and better as the years go on and so is the quality of the players. There are so many contenders for this team. Ellie Gilliatt (Derby), Beth Roberts (Stoke), Bridget Galloway (Sunderland) and Holly Housley (Sheffield FC).

How does she like to relax, when away from the game?

‘I love doing things with my friends and family. I’m watching Our Girl, it’s definitely the best thing that has been put in TV.’

We chat about a character in the dressing room.

‘Hope Knight, her singing and dancing livens up the changing room very very quickly. We had some tough opposition last season. The toughest player for me was Bridget Galloway of Sunderland. She’s young, has lots of potential, always has a goal in her no matter where she is on the pitch, or what time of the game it is. She’s scored a few goals against us this season.’

‘I miss the girls and the staff. Like I’ve said before, we’ve got great team spirit and banter is always flying around. We’ve kept in contact in group chats, but it’s not the same is it?’.

She’s kept goal at some cracking grounds in her burgeoning career.

‘The King Power (Leicester), The Keepmoat (Doncaster Rovers) and St. George’s Park. However, there is no better place to walk out of the tunnel than our home ground, the home of football.’

I wonder who has influenced this determined and hardworking young player?

‘I’ve had so many great opportunities which have allowed me to work with some amazing coaches. I have to say though that my Mum has been the biggest influence. The countless hours of driving me around the country to fulfil my dream and this wouldn’t have been possible without her. She’s my number one fan that supports me through everything and I’ll be forever grateful for that’.

Clarke will have many more fans throughout her promising career, if she continues to play as she did last season. 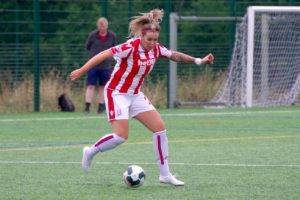 Faye McCoy – Stoke Ladies – Getting to know the opposition