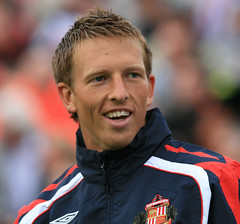 Waiting with bated breath for Pete Sixsmith’s verdict on the game, the weekend, I could not resist the temptation to pass on this outrageously optimistic thought contributed to the Blackcats forum by Mark Hanson, a Mackem exile in America:

………I posted on RTG after the Villa game that we could go on to win the
next 5 games. Two down. The next 3 are eminently winnable. Now I’m
thinking unbeaten until the end of the season. The Arse will have nowt left
to play for by the last game.

As Roy Keane says – see the Salut! Sunderland talking point – we are not safe yet. He doesn’t even think we played well yesterday. A weekend in Oman kept me from the screen, but most neutral reports I have seen suggest we were good value for the victory.

But today, while hoping that Keano’s faint praise will spur the Lads on to yet greater effort to keep the run going and vindicate Mark Hanson, we ought to be content with a Premier League winning sequence – three in a row – that seemed unimaginable earlier in the season. And delighted for Danny Collins, one of the unsung players mentioned here after a previous important win, that he should have grabbed that vital goal on the stroke of half time.

Next Post
Soapbox: maybe it’s because I’m not a Londoner