With only two games left, Bolton seemed a tap-in. Not our prospects of victory, but Salut! Sunderland‘s chances of finding a fan to write the last but one Who Are They? of the season (we have the Arsenal game covered already). Proper club, proper fans….they’d be forming an excited queue, especially after the late dash for safety, for such an opportunity to wax lyrical about their team. No such thing, or rather not at first. Appeals to Bolton fan sites, the supporters’ association, the local newspaper, my former colleague and Wanderers fan Ian Jones all met with deafening silence. So much for that belief that Bolton was a Real Club. Just when I thought we’d have to make do with a piece poking fun at them for their inability to string a few words together, Sluffy popped up, not exactly from nowhere but from one of the sites – Walking Down the Manny Road – where messages had been posted in the hope of luring a wise or witty Bolton fan into our corner of the web. Thank you, Sluffy*. And before I could add “shame on your fellow fans”, a flurry of messages (from Ian, a supporters’ association stalwart and someone at the local paper) suggested we could have them coming out of our ears. We’ve chosen two, so let Sluffy kick off the proceedings….

My first recollection of a Sunderland connection with Bolton was when we signed one of your heroes, Charlie Hurley, way back in 1971/2.

Charlie was at the end of his career when he joined us, so he might have been a legend back at the Roker but he was more a leg end at Burnden. 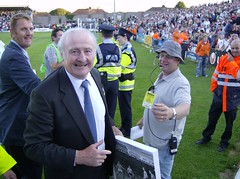 Then two seasons later a young chap with the name of Sam was given his debut; I always rated him more as a clogger than a Bolton legend as a player, but Mr Allardyce turned into the most successful manager for my club in over half a century.

Big Sam scored a cracker of a goal against you at Christmas time in 1975. A more powerfully headed goal I yet to see. A great game that we won but the crowd that day was amazing, you must have brought 20,000 down that day. I’ve never seen support like that before.

As you can tell from my memories I am an old fart, who moved away from Bolton before the Reebok had ever been dreamt about. Give me traditional the terracing and the craic with opposition fans anyday instead of the sterile stadiums we have these days.

Anyway time and tide waits for no man.

In recent times though, I guess you could say that we have both been a couple of yo-yo clubs, bobbing up from the Championship for a season or so, then bobbing back down again.

The last time I sat through a life Sunderland v Bolton game was from the comfort of a pub a few years back when McCarthy took charge of you for the first time – we did you that day – just like we are going to do you on Saturday. The game is on the box too. Seeing as I live miles away from Notlob these days, its about the only way I get to see the boys play at the Reebok.

A special mention for another Sunderland/Bolton connection would be for a talented player for us and a successful manager for you (at least for a season or two).

If I mention the Monkeys’ song Day Dream Believer and a line starting “Cheer up…..”,0 then I’m sure you will know who I’m referring to (I believe his daughter is a bonny lass too!).

OK, here are some answers to your questions….

What did you think of our respective clubs’ prospects before season started? Did you expect to struggle and what do you make of the recent revival?

I honestly thought we would both struggle – you more than us though. I thought Keane had spent top money for average players and that you might come a cropper and only hang around for your usual one season – but you have proved me wrong (just!).
As for us, many thought we would be in trouble when Allardyce left – but truth be told we had struggled for the last half of the season he was with us.
We had a very small and ageing squad – Gary Speed at 93 was still our main man in midfield! Our best defender Ben Haim was “poached” by Mouriniho – and his replacement – a chap called Cid was not up to it and was quickly shipped out.
Our new manager Little Sammy Lee had to build a squad with no money – shopped in the bargain basement and got it wrong big time. My view was that we were going to find it very hard this season – we had UEFA games to fit in, along with half our squad going on holiday to play in the African Nations Championship (ANC).
I’m not being clever … I knew we would be bad this season, but I did not think we would be so bad!


When did you last see a SAFC v Bolton game home or away, and what happened? Any other memorable games between us?

With living down south for more years than I care to remember, plus raising a family, the chances of seeing a team from the North was dependent on who the Wanderers might happened to be playing when I returned home for a visit.
I’ve mentioned a couple of games between our clubs in my intro – I’m sorry but you are going to have to make do with those.

Have you been to the Stadium of Light (obviously the last question may answer that). If so what did you make of it? What do you think of Sunderland itself? Or if not, had you ever been to Roker Park?

I’ve never been to the North East. Somehow it has always been a temptation I’ve found easy to resist!


What about the signings each club has made this season?

Laughable quite honestly. You seem to have bought Man United Reserves or Championship players for top dollar and I think we signed players from “doctored” YouTube videos – Daniel Braaten anybody?
Must say that in the January window we too paid over the odds to get a few half decent players in – but one I would suggest you keep an eye on is the young centre-back Gary Cahill. Remember you heard about him here first.

Your predictions for both clubs for rest of season

Well you’re safe – and if we don’t beat you we are stuffed, with just Chelsea away left to play (gulp).
We need Reading to lose and Fulham too – it’s not going to be a good for my nerves!

Do you regard Blackburn or anyone else much as we regard Newcastle? Or are you more grown-up about such things?

Nah, we are football fans – being grown-up doesn’t come into it! Bolton is a bit weird when it comes to rivalry – most of us hate Manchester United – but their main rivals are City and also these days Liverpool.
Blackburn see Burnley as their rivals.
Our true rival would probably be Bury – they see us as their must win game of the season anyway – but as we’ve spent most of our club history in a higher division than them we don’t see them as any form of rival at all.
There is a bit of banter between us and Blackburn but nothing compared to you and your Geordie neighbours

Any memories of players and/or management linked to both clubs? Todd is one, Allardyce another ut there will be many more. And do you have any memories of Nat Lofthouse from relatives, older friends?

I’ve already mentioned memories of former players and managers linked to both clubs. As for “Sir” Nat, he retired the season before I was big enough to go down the “Manny Road” (Burnden was situated on Manchester Road, Bolton), so I missed seeing the great man clatter a goalkeeper or two.
He is still alive and very fondly remembered by the townsfolk of Bolton – a true great.


Club vs country. Who wins for you?

Club for me – but it’s an easy choice – I’ve seen England win the World Cup and Bolton the Freight Rover trophy – would be great to see the lads with a piece of meaningful silverware.

Who will win? Score? How will you keep tabs on the game?

It’s on Sultana – so no doubt will be sitting comfortably in a pub with a pint at 5.15pm next Saturday.
A must win game for us and just a stroll in the park for you. We are finding it hard to score goals since Anelka left but Super Kevin Davies will be back for this game. I’m hoping you are going to rest the likes of Jones, Bardsley and Evans and thus give us an edge – so I’m going to go for a very nervy 1-0 win to us. And
I think our winning goal will come from your ex midfielder Gavin McCann – as we all know ex-players always score against their former clubs!

Next Post
Soapbox: the view from the directors’ box