Congratulations to Kenwyne Jones, who capped a terrific season for Sunderland by capturing two player of the the year awards. After easily topping the official club site poll, he was then voted the players’ own choice in a training ground ballot.

Danny Collins, who came second in both, enjoyed the huge consolation of being the supporters’ selection as player of the season. Such success for an unglamorous footballer who gives total commitment to the club is not surprising; Sunderland fans have always recognised the need for graft and passion along with the flair.

Collins is emphatically not a flair player, but he has the do-or-die spirit – at both ends of the pitch – that we associate with Charlie Hurley, Joe Bolton and Kevin Ball. 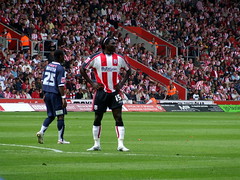 And isn’t he glad to be in our stripes now?
Picture: iowsaintsfan

Kenwyne, however, won hands down in the safc.com poll, scoring 96,810 votes compared with 36,350 for Danny (20 points being awarded for each first choice recorded, 10 for each second). And for all Collins’s heroics, he was the logical victor, since he displayed both guts AND flair, covering acres of ground each game and providing matchwinning goals or assists in several.

Nyron Nosworthy came third, and there were decent showings by Craig Gordon and Andy Reid. Jonny Evans comfortably triumphed over Grant Leadbitter as young player of the season.

Salut! Sunderland joins the club and fellow supporters in saluting the winning players, whose contributions were vital in ensuring Premier League survival.

And we offer customary thanks to A Love Supreme, for permitting the use of the Kenwyne caricature and picture of Danny.