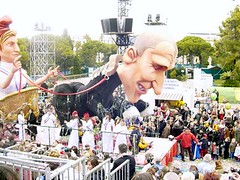 No one, so far as I know, has tried to tempt Zinedine Zidane out of retirement to spend a couple of years at the Stadium of Light.

But apropos of nothing in particular, I’d like to pass on a great quote about him from Ingrid Betancourt, the recently freed French-Colombian hostage.

In page after page of coverage of her release in Paris Match magazine, including an in-depth interview, there was a mass of important, illuminating information.

But what stood out for me?

The bit where she revealed that despite the depths of depair into which she had sunk, not knowing whether she would ever emerge from captivity alive, she not only wept at France’s defeat by Italy in the 2006 World Cup Final, but “absolutely loved it” when Zidane butted the Italian blockhead Marco Materazzi.

On second thoughts, Ingrid was being held in Colombia. She is half-Colombian. And we know what the Colombians do to people who score own goals…….the wonder, maybe, is that she didn’t feel Zizou let Materazzi off too lightly.

So when was the headline changed from “one woman’s” to “two women’s”? When
Salut! Sunderland was persuaded by an Emirati student at work to replace the original American YouTube clip I used with the much better one above (having watched both, I agree with her- it’s in French, but I hope no one will find it too difficult to work out that oh non, pas