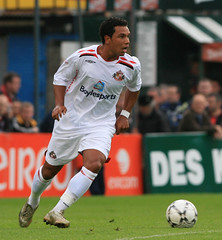 It is asking too much that any of us will quickly forget yesterday’s heartening win.

Let us be honest: the Mags were a test for us. That we overcame them, with superb performances from Malbranque, Cisse, Richardson, Yorke and Collins and lots of seven put of 10s among the rest, is a tribute to Keane’s success in adding some quality to a gritty squad.

I was there last time we beat the Mags, in the second of Peter Reid’s seventh-top seasons, and another 2-1 to us was long overdue. And the way we started, it might have been more like 4-1.

Mike Riley, not always a favourite of these pages, was spot on with his decision to award a free kick, not a penalty, from the trip by Butt on Diouf. Kieran Richardson did the rest, with a superb strike past Given.

Anyone watching the match on the sort of feed that Showtime uses in the UAE will know that even before Cisse opened ther scoring, we should have had at least one penalty. Bassong’s sly grab on Chimbonda’s arm as he threatened to race past him in the box was as clearcut as they come – provided someone sees it. Riley would have been unsighted, and is therefore blameless; it seems criminal that the linesman missed it.

I was less sure about Bassong’s other dodgy challenge, bundling Malbranque over in front of goal, but the Dubai-based studio team, which included Sam Allardyce, felt that was arguably a penalty, too.

But that’s enough from an expat. Pete Sixsmith will have a lot more to say. ANd guess what. There is more work to be done a few days from now.

We play Stoke away on Wednesday and must not lower our guard. It’s the sort of away game we ought to win this season, but there are a few City players – Lawrence, Delap, Higginbotham and Tommy Sorensen – who’d dearly love to turn us over…….read what a Stoke fan thinks.

Next Post
Who are you? I’m Mike Ashley, I think