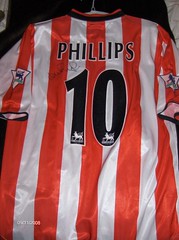 Paul Hanson is a West Brom fan with a great Sunderland story to tell. His son Mitch, who had overcome serious hearing problems to become a very decent footballer on the fringe of international schoolboy honours, spent a little time at the Stadium of Light under Mick McCarthy and taught Liam Lawrence all he knows (OK, some of what he knows).
Paul, a committed fan of SuperKev, who did wonders for both of our clubs (and especially SAFC), will travel from his home in Lincolnshire to Saturday’s vital game with Mackem friends.
In a departure from our usual format, there is no Q&A this week. This was not intended. But Paul, for all his tireless work these days for the community, must have been one hell of a back four blocker during his own football playing days, if his resolute defiance of the customary list of questions is any guide! As it happens, most of the things we ask each week are fully answered in his article, so nothing is lost. And we have split his engrossing piece into two, making for a longer section dealing with his history as a fan* but starting with his comparisons of Sunderland and the Baggies …….

On our website – WBAZONE (which is where Salut! Sunderland found Paul; check it out) – Sunderland are often singled out as an example of the kind of money required to outlay in terms of both transfer fees and wages in order to have a decent chance at Premiership consolidation.

Thoughts on your (newly departed) manager varied widely with some seeing him as a “Keeganesque” type manager likely to walk when under pressure while others saw him carved from the same piece of granite as his mentor Alex Ferguson and here for the long haul.


I guess those with the Keeganesque take were on the money.

Both teams are lacking in confidence at the moment and it seems that while our styles of play are very different our weaknesses are very similar.

After a fantastic battling display at Old Trafford, the pressure will be on the home side to attack and take three points from what already looks like a crucial fixture.

You have made some really good signings over the last couple of years with Jones and Richardson being possibly the best. On the other hand money has undoubtedly been wasted on the likes of Chopra (Earnshaw Mark II) and Gordon and you’ve probably paid too much money for average players.

Whether or not you can avoid the drop will depend largely on the quality of Keane’s replacement. Unless we can sign two quality players in January (particularly a striker) I think our future looks bleak.

There are many links between the clubs.

Recently paper talk was that Whitehead was on our radar. I’m aware he took some stick after the Bolton performance, but whenever I’ve seen him he has been a genuine wholehearted player even if his ability is limited.

We need a quality midfielder who can tackle and that has leadership qualities he almost fits the bill but not quite.

Richardson – pictured by Peadar O’Sullivan -on the other hand is a quality player when fit. He was definitely the difference in our “great escape” season bringing badly needed power and pace to our midfield. It was a major disappointment that we failed to sign him I guess our loss is your gain.

For me having been raised in the Midlands the real Derby is with Villa. Having been surrounded by Villa fans at every school I attended, and living for sometime in their heartland, there is absolutely no question which club I most love us to beat.

One thing being in a minority in your youth does is build character and prepare you for the challenges of supporting one of the countrys most frustrating teams! Bizarrely my son considers the Wolves game far more of a derby but that has much more to do with the geography of his upbringing and the fact that recently Wolves have been more frequent visitors than Villa due to our yoyo status.

The most recent link between the clubs is the superb Kevin Phillips. I well remember a game against Sunderland in our first promotion season. We completely ran the show and could easily have scored four or five, but the game ended in a 2-2 draw thanks to SKP’s two shots, two goals. I always considered him a quality striker and he did an absolutely fantastic job for us. Not replacing him during the summer window may well prove the difference between survival and relegation for ourselves.

The club vs country debate holds no dilemma for me. I rarely if ever watch England games and go along with Frank Skinner’s take that our club will always come first and for me by some considerable distance.

The Stadium of Light is a superb ground and often a happy hunting ground for ourselves. I remember the game during our promotion season (2003 I think) when Lloyd Dyer sprinted the length of the pitch to give Koumas the ball that won us the game after being under the cosh for long periods. I was approached on the way to work the next day by a Mackem taxi driver who insisted that even Dick Turpin wore a mask!


My son Mitch, then 15 (he’s now approaching 18), trained and played there when Mick McCarthy was in charge as he was recommended by Mick’s cousin who was also his coach.
At the time he was on the fringe of the England boys (disabilities) team as he is profoundly deaf but unfortunately got sent off in a trial game having scored twice and was considered too volatile.
Liam Lawrence took him under his wing (he still insists Lawrence uses the corner techniques he showed him!) and therefore will always have a soft spot for your club. He still speaks fondly of MM and Liam and to a lesser extent Julio Arca although he felt the remainder of the players were very aloof. He found the training facilities and ground second only to Man Us which is quite a compliment.

Having dated a girl from South Shields for over two years. I know the area and people well and there’s no doubt it’s a great friendly place to visit. We are travelling to the game with two Mackems from our town (yes, there are plenty of you even here!) who saw us last season at Peterborough and thought we played top class football. It should be a lively trip and the journey home could prove interesting!!

* Paul Hanson on Paul Hanson:
Let me introduce myself. My late Dad dragged me along to my first Albion game in 1965 aged seven.
For many years after that it was role reversal with me dragging him! In my time Ive done many things football related including playing and being a director in the Conference and coaching at Under 18 level.
I’ve also written for the Racing Post although that relates more to my racing rather than footballing interests.
In my first five seasons as a WBA fan, we won the League Cup once and were beaten finalists twice and of course there was our famous (and last !) FA cup triumph in 1968.
It all seemed so easy back then but boy was I in for a rude awakening. Outstanding memories for me include securing promotion at Oldham in the Giles era in a stadium packed with Albion fans; witnessing the legendary 5-3 slaughtering of Man U at Old Trafford (standing in the Stretford End!) and the fantastic promotion season when we ate up a 10-point lead that Wolves had over us with the emotional Balis penalty at Bradford in the last minute putting us in the driving seat followed of course by the “Great Escape” season which somehow saw us cheat relegation in a nail biting finale.
The wilderness years from the early 80s to the arrival of Sir Gary (still loved by so many) Megson were tough times to be an Albion fan. But if there is one thing that being a Baggie does for you its build character!
I now live in Lincolnshire so complete a 200-mile round trip to every home game. teach “difficult and challenging” Year 10 and 11s, and run the local youth centre. Ive met most of the legends from the 60s onwards and after the sad demise of the King (Astle) there are two that stand out with the fans: Tony Bomber Brown, who still does the radio commentary on every game, and Bob Taylor, who chairs the fans’ golf society. SuperBob is a diamond and if you cut him I’m sure his blood would run Blue and White despite his North East connections. Our fans really appreciate hard working players and all three of these classy performers would fall into that category.
As for this season despite the ramblings of Mr Mowbray I thought that anything above the relegation zone would be a positive.
Many of our fans were deluded that we would achieve the dizzy heights of mid table simply because of the brand of possession football we play. They forgot that we cannot defend and despite regularly out playing the opposition defensive frailties and our toothless attack (Miller excepted) have seen us struggle even more than I’d imagined. Much of this is down to our lack of activity in the transfer market. Because while Mowbray has signed some quality in the form of Zuiverloon (a certainty for Man U in my opinion) Carson and Valero with Gera and SuperKev going in the opposite direction we were always going to be short of goals.
Not replacing Phillips during the summer was a cardinal sin and one weve paid for dearly. As a consequence of his financial prudence our Chairman is coming under increasing pressure to address the wage structure which prevents us from signing the players we so badly need. Club politics could get ugly if the window sees no real activity.