Put this posting down to la treve. That’s how French football deals with the depths of winter: a break in the season when bad weather might be expected (or so my late father-in-law used to claim; I always thought it had more to do with players wanting to eat, drink and be merry).

Sunderland’s own February treve, an unintended two-week gap between games resulting from our cheap exit from the FA Cup, allowed a few Mag-baiting imaginations to run riot at Blackcats forum. Salut! Sunderland nearly allowed its own thoughts to go the same way before deciding instead on a nice, safe, feelgood set of photographs from the recent SAFC v Fulham game. 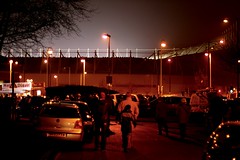 Walking to the ground
Originally uploaded by JonHall

Jeremy Robson had started it over at the Blackcats forum, dreaming from his Canadian wilderness of misspent days in the Clock Stand Paddock. What, he asked, is there to hate about Newcastle? Quite a lot, it seems. It is fair to say the list of answers Jeremy initiated has since grown like Topsy as other supporters have chipped in..

File it under Mostly Good Fun, alongside Ian Black’s have-it-both-ways book Mackems vs Geordies/Geordies vs Mackems…. 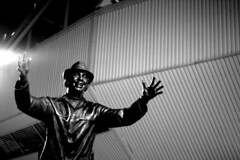 Salut! Sudnderland seriously considered publishing the whole list but was advised by its systems department that this might stretch the site’s capacity to bursting point. 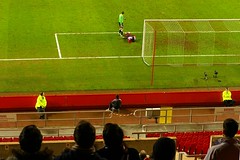 So sit back and enjoy Jon Hall’s pictorial essay from his visit to the Stadium of Light as a Fulham fan. Thanks Jon, for saving us from ourselves. 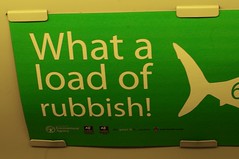 Though even we couldn’t resist repeating, for anyone who missed it, this delicious anecdote from Chris Butler, whose pursuit of match-worn SAFC players’ shirts has already made for another interesting interlude between games:

“One of my best experiences was at a non-Sunderland match. Watford used to run penalty competitions at half time for local youth teams. I played in these a few times and on one occasion Watford were playing the Mags. The opposing supporters used to cheer on opposing teams in the shoot out and the Mags happened to be cheering for us. We won the shoot out and the inbreds were applauding us until I took off my club shirt to reveal a Sunderland shirt underneath! Nearly cause a riot and I was escorted from the pitch by the Watford stewards! Funny as f*** knowing the Mags had been cheering for a Mackem!!”

* Jon Hall on Jon Hall:
I like taking pictures of football, but I find modern pictures of footballers boring. I’m hoping that in 10 or 20 or 30 years time, stuff like my stuff will be far more interesting and relevant than the latest close-cropped long-lens background-a-blur photo of a celebrity footballer kicking a football. The papers are obsessed with this stuff and I just don’t understand why.
This strange little hobby started on a holiday at the World Cup and has since taken me around the early stages of the FA cup, to numerous random non-league midweek games, and to the Eternal Derbi in Belgrade. Getting a press pass for that and watching the amazing crowd scenes from the running track was probably the most incredible experience of my life.
I spend most of my spare time watching Fulham lose, except in the summer when I spend it watching Kent County Cricket Club lose. I love doing both…..

Next Post
Who kept all the shirts? The butler did it