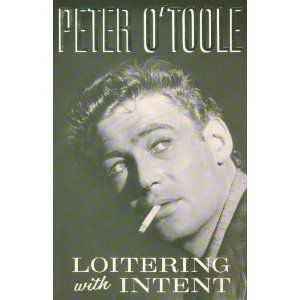 Peter O’Toole’s connection with Sunderland AFC was, for a very long time, a mystery to me.

I’d heard the rumours, been told of the chatshow asides and wondered about the truth. Couldn’t recall seeing him in the away end anywhere, and didn’t bump into him on rare forays into executive dining areas.

But in 2002, I thought I had made a breakthrough that would lead the a modest world scoop for the newsletter of the London and Southern England branch of the Sunderland AFC Supporters’ Association.

My obscure musical interests had led me to interview Linda Thompson, the folk-rock singer.

She turned out to be one of O’Toole’s closest friends (her American husband, Steve Kenis, was his agent). And she had an idea that the link had something to do with his Irish father playing for us. Wikipedia says: “O’Toole is the son of Constance Jane (née Ferguson), a Scottish nurse, and Patrick Joseph O’Toole, an Irish metal plater, football player and racecourse bookmaker.” But there is no trace of PJ O’Toole in my SAFC records.

So Linda and I did a swap: Tony Benn for Peter O’Toole.

I promised to send Benn a copy of her album, Fashionably Late, which she excitedly signed “from a fan” (prompting an equally effusive reply) and she set to work on O’Toole.

“Normally he won’t do interviews,” she told me as I left her rather desirable pad off the King’s Road in Chelsea (Linda, it must be said, had moved effortlessly from life in a commune with her ex, the fabulous guitarist/songwriter Richard Thompson, to a life of luxury.)

“But he’s so mad about sport that I’m sure he’d do this.”

Oh no he wouldn’t. The trail was to lead nowhere in terms of an interview, but did enable me to assemble the story of the O’Toole connection to Wearside.

Failure of the principal mission was announced by Steve Kenis a couple of weeks after his wife’s confident encouragement. “I spoke to Peter who is in Tunisia shooting a picture. But he said that his tie to Sunderland AFC, if you could even call it a tie, was strictly historical and very tenuous.

“It was all really to do with Roker Park. Since they moved to the Stadium of Light, he has not really considered himself to be in the Sunderland AFC group or family or whatever. So he thanks you very, very much but says sorry, it’s not for him. He has not considered himself a supporter since the move. Everything they meant to him was when they were at Roker Park.”

The story obviously still deserved to be told. And I knew that O’Toole had mentioned Sunderland on television some years ago, and perhaps in an autobiography.

A plea for help on the Blackcats e-mail loop brought instant relief: one subscriber, Ian Ewart, said his grandfather had worked as a builder’s labourer in Sunderland “with an Irish fella called O’Toole – and according to my dad it was none other than Peter’s fatha”.

The nature of the work, Ian thought, probably explained the “reticence in recounting his humble origins”.

Another e-mail, from Michael Storey, put flesh on bones. He came up with a story the Sunderland Echo ran in 2002 as O’Toole was pondering whether to accept an honorary Oscar (he did in the end).

The Echo began by confirming the book reference. To quote snippets from O’Toole’s memoirs, his dad – “Captain Pat” – had “served an apprenticeship as a metal plater and shipwright in the North East of England, where my grandmother ran a pair of second-hand furniture shops. At the end of Great War his 20s were running out and he turned to gambling. Captain Pat lived … as an itinerant racetrack bookmaker.”

The Echo‘s John Howe was helped in his researches by a bit of his own family history.

His grandfather also knew O’Toole senior and worked for him as a bookie’s runner. John found that Pat had been a man who, though well-liked, lived “on the fringes of the law” and may well have been talked into leaving Sunderland by the police.

The family eventually settled in Leeds, where Peter was brought up, but father (and, in turn, son) maintained a “strong affiliation” with Sunderland, through football.

During the 1980s, the Echo added, O’Toole made a low-key return to Wearside, staying at the Seaburn Hotel (now the Marriott), while digging for the autobiography.

Maybe O’Toole genuinely, though just as wrongly as Gina McKee, felt he had nothing to say that would interest us. My Wear Down South series ended a long time ago. O’Toole was just another of those who got away.

Peter Seamus Lorcan O’Toole is now 79. If the passing of a few more years has mellowed him, Salut! Sunderland Towers remain open to one of the great actors of his generation, a man who holds the unusual distinction of being the most-nominated male lead (eight) not to win an Oscar. Failing that, maybe big Niall – as I wrote when Quinny was chairman; maybe Martin O’Neill is the man for the job now – could play the Irish card and lure him to the Stadium of Light …

* Buy books, CDs and much more besides at the Salut! Sunderland Amazon link. Click anywhere on this footnote.

Next Post
Wolves Soapbox: O’Neill will be under no illusions