The countdown is about to begin.

Some time today or tomorrow, the number of hits – pages visited by readers – registered by Salut! Sunderland since its modest launch on January 16 2007 will be within 10,000 of passing the two million mark. (Stop Press: we’re up to 1,990,000+; look a little to the right where the figure is shown to be constantly climbing.) It is an unremarkable milestone considering the traffic generated by many other websites but still one of which all those who help or have helped produce this one should be proud.

And to add to the generous voucher worth £200 off a holiday booked through Hays Travel, we can now announce more prizes in the grand Two million Hits competition – plus a closing date for entries.

With just a hint of mischief, PF first of all offered its Italian anti-fascist T-shirt but left it to Monsieur Salut to decide whether this might go down like a ton of bricks. My response is that since PDC has assured us all that he is no fascist, and Salut! Sunderland reached the conclusion long ago that it had said all it wished or needed to on the subject, no one could reasonably object. 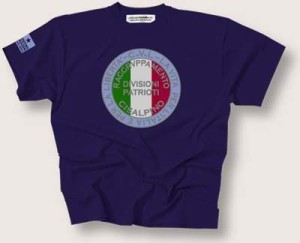 But what of those who might unreasonably object? Does Salut! have a duty to cater for the sensibilities of all its readers?

Philosophy Football was already thinking outside of the box. And it came up with three more, the L/Cpl Jones “Don’t Panic” T-shirt you see above and two more quoting Socrates and Adorno. Click each image for a clearer view. 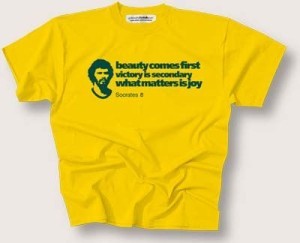 So I will make it easy. Win first prize and you collect the Hays Travel voucher, remembering that although the company is proudly Sunderland-based, it has national presence and its holidays may be booked online.

Come second and you get three of the T-shirts, choosing which of the four on offer should then be the third prizee. 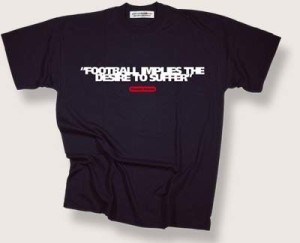 If another prize sponsor pops up in the meantime, I will make all four T-shirts, total value just over £80, second prize and announce a new third prize.

The competition will run until the end of June, midnight UK time on the 30th, whether or not we get the two millionth hit before that date.

Please enter by going to the link to be found at the top of this item and repeated below. All you are asked to do is to offer your warm, witty or wise assessment of the season just gone. Enter as often as you wish and feel free to do if you support Newcastle United, Middlesbrough, Scarborough or any other club. M Salut’s decision on the winners will be final.

Do not try to add your entries here; you will not be able to. I need to keep them all together at the same posting.

And finally, for lovers of nostalgia, here – with no attempt to update the information given – is how Salut! Sunderland presented itself to the world in January 2007:

Welcome to Salut! Sunderland, a new blog giving news and views about Sunderland AFC from a supporter living far from the Stadium of Light in the south of France. The site is an offshoot of Salut!, a personal blog I created after being made redundant – amid just a little controversy – as The Daily Telegraph’s Paris correspondent.

With Salut! Sunderland, I am not trying to set myself up as a rival to the Sunderland Echo, Ready To Go, A Love Supreme or any other print or electronic part of the media as a whole.

Who knows who might turn up here? Even Lilian Laslandes and Eric Roy, two of our French former players, could take a look inside from time to time……(Monsieur Roy, introduced as l’ancien chat noir or ex-Black Cat was the studio summariser when French TV screened Boro v Sunderland, our first of precious few victories during the last relegation season).

After 29 years on the DT, the last two-and-a-half of them in Paris, I have moved to the south – roughly halfway between those well known footballing hotbeds of St Tropez and Toulon – and plan, for now, to work from here as a freelance journalist.