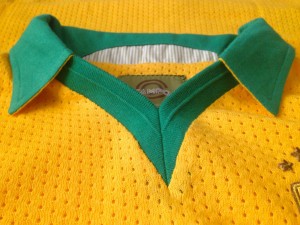 By now you’ve heard the news: England suffered their second loss at the World Cup, this time at the hands of the generally underestimated Uruguay. It’s the Three Lions’ second loss so far in Group D, making their odds of advancing to the finals a statistical impossibility (no team in the Cup’s history has ever made it to the finals after having lost two in a row).

Even before Costa Rica beat Italy 1-0 to sever England’s slender lifeline, team manager Roy Hodgson told Monsieur Salut’s old colleague Henry Winter that their chances were slim beyond this point according to this tweet:

Hodgson: "Our chances are incredibly slim of staying on'' #eng

Back to England vs Uruguay: right off the bat both teams knew this match was a must-win for them to stay in the running to advance, given that both had lost their inaugural matches on the previous Saturday. Especially considering Uruguay was down two primary players (Maxi Pereira was suspended and Diego Lugano was injured), the pressure on both sides was immense.

But a match that initially seemed like it was destined to be a draw was broken open in the 39th when Luis Suarez headed in the go-ahead goal, and was decided for good when he smashed the game winner into the back of the net in the 85th to moot Rooney’s 75th minute curse-ending finish that had briefly drawn England level.

Suarez’s dazzling performance lead almost immediately to talks between Barcelona and Liverpool regarding a potential transfer transfer, the likelihood of which is a big topic of talk on Twitter this morning, as illustrated by these tweets from TEN Sport’s Joe Morrison and TransferScoop:

Now, the discussion seems to have turned to whether this something that was planned all along, or if Liverpool saw an opportunity to bump up the asking price for Suarez, given his powerful performance yesterday. While the official details aren’t out, you simply can’t discount the importance of yesterday’s game on the deal.

Either way, one thing that’s obvious at this point is the sudden social media boom surrounding Suarez. Just look at this graph from the social media trackers Topsy that show how mentions of Suarez jumped from 14,247 to 472,093 in a single day:

Of course another star player getting lots of attention on social media from the game yesterday was Wayne Rooney. While he’s used to getting his fair share of attention during the EPL season, up until yesterday he’d never scored a goal in any of the World Cup games he played in to date – close to 800 minutes.

When “Wazza” evened out the score yesterday, it looked like he could end up being the Three Lions’ savior, and you can see how on the 19th his mentions on social media jumped dramatically – but he still got less than half of the mentions that Suarez did.

Of course, both those numbers are abysmal compared to the tweets that featured the official hashtag of Team England, #ENG. According to data from Topsy, the #ENG hashtag has been featured in roughly 1.7 million tweets and peaked yesterday with 722,000 tweets. Interestingly enough, the most popular tweet of the day yesterday came from good old English boy Mick Jagger who tweeted out his well wishes for the team and got nearly 6,000 re-tweets.

Let's go England! This is the one to win!! #WorldCup #ENG

I fully expect social media to explode when England plays next against irrespective of the outcome of Italy vs Costa Rica.

Until then, you can expect the #ENG hashtag to be filled with polar opposites of “we can do this!” positivity or “we’re screwed” defeatism, and very few in between. Of course, beyond Team England, the Salut! Sunderland second team voting is still underway [see column to the right -Ed], with the US in the lead.

Either way, we’ll all be watching some of the best football we’re likely to see for the next four years – for the best coverage of the rest of the World Cup, BBC and ITV are the way to go, unless you can access ESPN or other websites from the US which are offering multiple camera angles and in-game highlights. You can also track what is being said about the team by following the hashtag #USA.

* Spencer Blohm on himself: I am a freelance sports and entertainment blogger. After developing a fondness for football at a young age I soon discovered a general physical awkwardness and lack of coordination were better suited to observing the sport, rather than playing it. I live and work in Chicago and can often be found screaming at the top of my lungs during a particularly intense match on TV, much to the dismay of neighbo(u)rs.

Next Post
Brazil 2014. Robson reports in: that phenomenally good and bad Suarez