John McCormick writes: My senior railcard expired last week. I didn’t bother to renew it as I knew my chances of getting a Burnley ticket were remote and my next trip to the SOL won’t be for some time.  It’s possible I won’t even get there before the January window, at which point I hope we’ll buy a goal scoring forward. We don’t have one now, according to Pete Sixsmith’s report on a match we were expected to win:

I’ve probably used the Harold Wilson line about a week being a long time in politics several times in the past, so forgive me for using it again, but it needs to be trotted out after a dismal, disappointing and mildly depressing performance at Turf Moor.

Seven days ago, we lauded Gus Poyet for making substitutions at the right time that changed the game for us and enabled us to claw back a point against a technically superior Tottenham side. This week, our Head Coach is up for being pilloried making changes which allowed an organised but limited Burnley side back into a game that they were struggling to get a foothold in. This came after we had made a bright start to the second half (bright in comparison to the flat first half performance which was as dim as a Toc H lamp) and looked as if we might go on and win it. On came Gomez and Altidore for Larsson and Johnson and the feeling in the 1960’s retro Cricket Field End was that we could now go on and win, courtesy of some clever scheming by the Spaniard and maybe even a rare Premier League goal for the captain of the USA national team.

The balance that we had was disturbed as Gomez struggled to get into the game and I can say without fear of contradiction that M Salut, me, Malcolm Dawson, the late Chic Murray and Bruce Springsteen have more chance of scoring than the big New Jersey man. No passes, no dribbles, no headers won, no shots made. Not a Premier League centre forward. 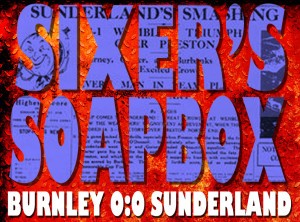 It allowed a well organised but oh so cautious Burnley side to have some control over the midfield and attack our two central defenders. Wes Brown, fresh from his appearance on “Who Does The Dishes” (don’t ask), suddenly found players running at him as the midfield shield now consisted of Lee Cattermole, who ran around like a wee Dutch boy ramming his fingers in leaky dykes as he attempted to protect the creaking duo of Brown and O’Shea.

Larsson had helped Cattermole in the first half, but his disappearance meant that Rodwell had to join in deeper and push forward quicker. That he did neither to any degree of competency is extremely worrying. He looks heavy legged, does not appear to like to take or make (or tack or mack if he were a true Sunderland man) a tackle and rarely shows any of the attributes that earned him England recognition relatively recently. He is beginning to look like a Brian Heslop, a Steve Doyle or even (Jeremy, avert your eyes|) a Shaun Cunnington.

This really was a dreadful game with absolutely nothing to commend it. Both sides were well drilled and were told what to do by coaches who know how they want their teams to be set up. I heard someone on the radio last week saying how Pep Guardiola can change formations a dozen times in a game and how Mourinho can do the same. Neither Poyet nor Sean Dyche have the quality or quantity of players to be able to do that.

Burnley played with two banks of four and two up front, we countered with a 4-1-4-1 formation which should give us a base to attack down the flanks and push forward to feed off our centre forward. That role fell to Connor Wickham, who held the ball up well last week and brought players into the game. That was then, this is now. He looked sluggish, was caught offside too often, failed to pass the ball to players in a better position and looked like he did when he first arrived three years ago.

His potential replacements, should he have picked up an injury, were the aforementioned Altidore, who will never make it as a Premier League footballer and who will very quickly lose his cult status if he turns in another cameo as wretched as this – and Danny Graham, the Forgotten Man of the Stadium of Light. Why no Mikael Mandron? He could hardly be less productive than these two. Neither Fletcher nor Alvarez made the bench, just £12m worth of strikers with a single goal between them in a red and white shirt. I fear that one or both will play on Tuesday.

At the back we looked solid until the last fifteen minutes when we buckled a little, but it was good to keep a clean sheet. However, that is not too difficult against a Burnley side who, without Ings and Vokes will clearly struggle for goals. Former Boro player Jutkiewicz worked hard and gave Brown some awkward moments, ensuring that it is unlikely that he will be asked round to Wes’s house for a meal – although if he is, he will be expected to don his Marigolds and squirt the Ecover. Van Aanholt did well and almost scored at the death. Vergini was ok against players who are a little short of Premier League quality.

Neither side showed any creativity in midfield. We passed it around in an attempt to draw them out, but they were not having it and stayed where they were. Giaccherini tried to open them up but there was precious little space in the areas where we needed to be explosive, while Burnley were content to try and hit willing runners in Jutkiewicz, Sordell and his replacement Barnes. Johnson had one run in the second half, similar to that which ended up with a goal last week, but he was squeezed out.

Apart from the football, it was a decent day. The weather wasn’t fantastic, but it did not pour down as it often seems to do in this proud town, tucked away in its valley. The bus stopped in Colne, home town of Wallace Hartley, the conductor of the band on RMS Titanic who has the distinct honour of having a Wetherspoons named after him.

I bussed into Burnley, had a grand chat with a Claret fan on the journey who guided me to my destination, The Bridge Bier Huis in the town centre, where I met a Burnley supporting chum who I had originally met on holiday in Italy in the early years of this century.

Pints of Black Cat Mild and Premiership Bitter from Moorhouses and Saltaire Blonde from the right side of the Pennines were quaffed in a splendid pub, full of proper football fans from both clubs and thankfully empty of the mindless chanting about Shearer, Taylor, Cabaye and now Pardew which seems to amuse some of our younger supporters.

As the convoy of coaches pulled out of Burnley, the frustration was tempered by news of Gareth Breese, eleven years at the Riverside and in his final game, hitting the winning runs as Durham claimed the Royal London Knockout Trophy to bring a trophy back to the North East and to a team dominated by Sunderland born players.

The journey home was a pleasant one as the sun peeped through the cloud cover and we saw the yellow bikes and yellow bunting still there from that magnificent day in July, a day that will live long in the memory.

Next Post
Pure Poyetry across the Pennine Way: faint praise for draw at Burnley