Rob Hutchison had to watch on a stream but was quick off the mark with his one word player ratings. No quarrels from Monsieur Salut (though 10/10 for Catts would have been tempting), who wrote at ESPN ‘At no stage of this game, with the possible exception of an opening spell of compelling but ultimately fruitless possession by Chelsea, were manager Gus Poyet’s players second best to his former club’.

Unbeknown to M Salut, deputy editor Malcolm Dawson, just in from the match, had already started editing Hutch’s ratings. This was Malcolm’s introduction: Rob Hutchison is a man of few words. At least he is when rating the Sunderland team in the minutes following the full time whistle. Today’s performances all rate highly against a team that had scored in every game this season and were unbeaten as they arrived at the Stadium of Light. They left still unbeaten (and defeat would have been harsh on them) but this was a gutsy Sunderland performance … 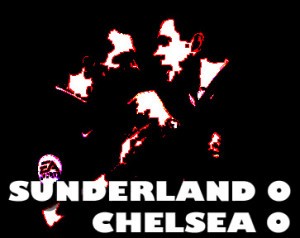