Stephanie Roche must have been chuckling into her Guinness – sorry, sports energy drink – as she favourited my tweet about the article my daughter Nathalie Randall wrote on her team, Old Actonians, gaining promotion to the Women’s Premier League. [Ha’way, Lass, give us a RT now and then, too – Ed].

If her spell with Houston led to nothing, I suggested, maybe Stephanie – famous for the wonder goal that won her second place to James Rodriguez in last year’s Fifa Puskas award – should consider joining Nathalie’s club.

Since her move to Sunderland Ladies was announced next day, she already knew she was heading to the women’s part of the team supported by Nathalie’s dad.

What an inspired signing. As Stephanie herself says, she should be judged on an awful lot more than that fabulous goal she scored for Peamount against Wexford Youths, two neat touches followed by a delicious volley in the Bus Eireann Women’s National League of Ireland. Mind, the goal’s always worth a look – the YouTube clip is in that piece I link to – even if Nathalie reckons, without excessive modesty, that her own goal-of-the-season award for the 2013-2014 was for a shot that wasn’t so far behind.

“I think people who know me know that I’m more than just one goal and I want to try and prove that now,” Stephanie tells safc.com “I’ve scored a few goals since then including a good one against Costa Rica so we will see what happens in the next couple months and hopefully I can show people what I’m about.” 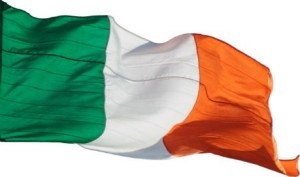 “It is great to be here and to have signed for Sunderland Ladies. I have a few friends within the Republic of Ireland set-up who have played in England and it is a great standard so I can’t wait to get started.

“I had a full pre-season in America so I’m fresh and raring to go, but I’ve enjoyed training with the team over the past few days and I still have a period to settle in before we return to action against Notts County.
“Hopefully I can also bring further experience to the group because I’ve scored goals in the UEFA Women’s Champions League and at international level, so I’m hoping I can fit right in because the team have done really well this season.”

Salut! Sunderland has always tried to encourage the women’s team in their astonishing rise to the Super League.

We offer a grand céad míle fáilte to Stephanie and to this unexpected revival of the SundIreland phenomenon – credit, I think to ALS for coming up with the excellent neologism capturing that era of Irish dominance of Sunderland. Niall and Keano, and the Drumaville crew, may have gone but there’s still John O’Shea to lead the home-from-home welcoming party.

* And at ESPN, Monsieur Salut asks whether Dick Advocaat will have Stephanie giving target practice tips to our goalshy Lads … http://www.espnfc.us/club/sunderland/366/blog/post/2497403/sunderland-facing-summer-long-quest-for-goal-scorers

Next Post
Why do we always play Chelsea at the end of the season?