John McCormick writes: Pete Lynn, aka Wrinkly Pete, is no stranger to this website. Nor is he a stranger to the Stadium of Light, despite having to make a considerable effort to get there.

But make the effort he does, and sometimes the journey, if not the result, makes him wax lyrical. Here he is explaining in his usual inimitable manner why he enjoys the trip up north:

“Nice legs, shame about the face.”

What I hadn’t realised when I decided to create a link to watching Sunderland using these lyrics from The Monks 1979 hit was that they were formed from The Strawbs (“Part of the Union”) and that once their true identity was known, the “true” punk world shunned them and the three man group was finished. Those of you still reading, please carry on…………

Although I have been a supporter since around 1955, it is only since 2008 that I have been able to attend games, especially home ones, frequently. In that time, with a few exceptions, our football has become harder and harder to watch. However, during that time, I have been reminded that, contrary to what Bill Shankly said*, there is more to life than football. In the same way, there is more to my day getting to watch a game at the Stadium of Light than the football itself. In fact, the journey and the company of friends is really nice, shame about the football.

Take the recent thrashing by Southampton. Thanks to the Supporters Association and help from SAFC, the local Heart of England branch was able to put on a small coach, plus driver, from Coventry. This meant that we were spared the usual eight hours of driving. It also meant that I was able to take my youngest son and nephew and my great nephew to the game, the latter two not only visiting the wonder of the stadium for the first time but Sunderland itself, given that they live in Bristol.

It is this last point that for me is the most significant. My parents came from Hartlepool (Dad) and Roker (Mum) and in fact met, at work, in a shop on the corner of North Bridge Street and Dundas Street.

I took my “family” there pre – game (see photo) and pointed out the building’s significance in each of our lives. Indeed, without it and the chance for my parents to meet there, none of us four – and quite a few others – would exist. So Bill, you were wrong, buildings are a matter of life and death!

Our day out included a great many laughs and some juvenile fun provided by the fourteen year old who insisted on each of us guessing our arrival times – at Coventry, Wetherby services etc etc. We had a veritable feast of a packed lunch en route, including my wife’s delicious fruit cake and even managed to down a pint before entering the stadium.

To say the actual entry, at “half-height” is jaw dropping is an understatement. We who do it regularly take it for granted but seeing the look on the faces of my nephew and his son was worth every penny and another pertinent reminder of Bob Murray’s fantastic legacy.

The less said about the match itself the better but even during the debacle we were able to be rescued by some “gallows humour” as my nephew (he and his son are season card holders at Ashton Gate) received updates from Bristol City’s game at Derby where their three goal interval lead was turned into a 3-3 draw courtesy of a brace from …….. Darren Bent! The return journey was uneventful but gave me the chance to recount to my nephew tales of some pretty wild nights out with his Dad, playing skittles in Bristol pubs in the sixties and seventies.

So this is pretty much the way my regular group of four, travelling to home games, approach the day out. We have become friends since 2008 and whereas in the early days the eight hours would be filled with discussing the likely team, current form, injuries and then analysing the performance, we now talk about more or less anything, with most interest expressed in what sort of cake my wife has cooked this time!

So, perhaps it should really be “ Nice cake, shame about the football” 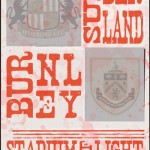 ring on Burnley, and maybe Lemon Drizzle Cake. (Did your mouth water when you read that?)

*Bill Shankly actually said: “ Some people believe football is a matter of life and death, I am very disappointed with that attitude. I can assure you it is much, much more important than that.”

Next Post
Sunderland and Hull, Middlesbrough or Palace? Swansea or Bournemouth? Not WBA, as Leicester take off