And we’ll start  with that single club which was languishing in the doldrums. 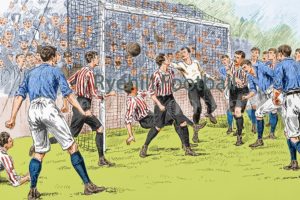 It was, of course, Sunderland.

The start of our season was OK but then some early losses led to a plummet down the table and we had just 7 points from 11 games when I last reported.

We haven’t recovered and although we’ve managed three draws since then we have not had a win.  Our 10 points from 16 games is relegation form and, not surprisingly, we occupy bottom slot.

And what’s more, we’re managerless. Who would have thought that was likely to happen?

The graph(s) below shows how slowly our points have come and how we’ve been bouncing along in the bottom three for a while:

Will a new manager and a rekindling of the spirit of ’73 see us safe? I live in hope but only time will tell. As far as Sunderland is concerned, given the managerial roundabout and the ups and downs of the last five years, it does look as if one natural order has been restored.

That leaves five clubs to consider, and you can see how much better than us they have done from the next graph, which compares points gained since the start of the season with what is needed to achieve promotion or a playoff place. (If you have been following this series you should be familiar with it by now. If not you can catch up with the series by following the links at the bottom of the page).

As you can see, Aston Villa and Middlesbrough have climbed into the playoff places. Villa have been in contention for a while, although sometimes from the bottom edge. Their two wins and a draw since the last report puts them in sixth, but with little margin for error. ‘Boro have spent more time out of the playoff places but three wins and  a draw in recent games have enabled them to draw level with  Villa on points and they now occupy fifth place because their goal difference is a single goal better. Neither can afford to slip up because there is a host of clubs at their heels.

Next from our favourites are Leeds Utd. Leeds were the star performers from our chosen teams up until my last report; they were well above the line that signifies promotion. Since then they haven’t so much faltered as fallen apart, with only one win, against high flying Bristol City, as opposed to four losses. That poor form has taken them out of contention for straight promotion and down through the playoff zone to tenth. Will they pick up? Your guess is as good as mine but I gather there are some very disgruntled Leeds fans around at the moment.

Level with Leeds on points, but with a slightly worse GD, are Sheffield Wednesday. They haven’t spent a lot of time in the playoff zone and remain outside as things stand but, bouyed up by a mini run which has seen them pick up seven points in their last three games, they are making a go of things. Will their run continue? Owls fans will  no doubt think they can do as well as Leeds, if not better, but for them the elephant in the room must surely be their home-town rivals.

A good bit further down are Fulham, whose recent form has not only been worse than Leeds’ but also worse than Sunderland’s. They have never been in contention for even a playoff place and, with only two points from their last five games, have dropped to seventeenth. They have also acquired a negative goal difference, so clearly have some work to do to redress the balance. I’m not sure they can do it, given that teams of the calibre of Derby, Ipswich and Forest are above them.

Unless, of course, you’re a fan one of the allegedly unfancied teams that currently occupy the top four slots. They must merit more than a mention. Wolves (top) and Sheffield United (second) both have 4 wins from the last 5 games, with one loss each, and the Blades have opened a seven point gap over ‘Boro. Surely that’s worthy of praise.

And even Cardiff and Bristol City, occupying the top two play off places, have  opened a points gap between themselves and our choices (and also have better goal differences). Their current form isn’t quite as good as that of the top two but I bet their fans aren’t complaining.

Some of those four, if not all, have been around the top long enough for casual observers to think there must be some substance to them, and that at least one or two of them will be there when that final whistle blows at the end of May. And I think those observers are correct. I can’t see all of them making it but they won’t all fail,   although Preston, 6th in October but now 14th after a run of defeats, show how easy it is to fall out of contention.

Which of the current top four clubs are going to be pushed out of the top six spots?

And which clubs are going to do it?

But that’s a long time away, and there’s a long journey to travel before May.  Before then Christmas is coming, as might be a manager for Sunderland, and the January transfer window. We’ll see what it brings. Until then, enjoy your good fortune if you’re in the top six. And if you support Leeds or Sheffield Wednesday or Fulham just glance down to the bottom of the table. You could be doing worse.  A lot worse.

*Wolves graphic courtesy of Jody Craddock, whose permission to copy we gratefully acknowledge