Consequently, I did some new polls at the end of January, timed to coincide with the closure of the transfer window.

Two of the polls concerned clubs that had dropped out of the running and didn’t look like they’d ever get back. In January Sheffield Wednesday were in seventeenth place. Would they stay there?

I also asked you what you thought about Sunderland – would we stay up?

Just over half – 56% – of respondents said we would. I wonder what that figure is now.

More importantly, perhaps, I asked who you thought would get straight promotion.

Wolves, deservedly, were clear favourites, with Derby and Villa some distance behind. Then came Sheffield United and Bristol City, followed by Fulham, Cardiff and Leeds. Boro and “other” were also available categories but neither gained any votes:

Then I asked you who would make the playoffs: 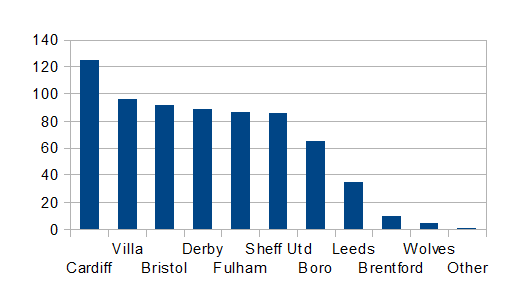 who will make the playoffs?

This time Wolves, no doubt because of their prominence, were being discounted (but only for the playoffs), Cardiff, who weren’t fancied much for straight promotion, were streets ahead when it came to making it. In between were eight clubs. Boro, originally clear favourites to go straight up, weren’t in the running and Leeds and Brentford garnered even fewer votes (and one person voted for “other “ but never said which club they meant). There wasn’t much between the other six – not that the number of votes was anything like the start of season poll.

I was thinking on the lines of removing about three of the original clubs and slotting in perhaps three new ones, and it wasn’t working out. Slimming down the list would make my graphs easier to follow but it would mean arbitrarily excluding some of the clubs that had done as well as others in the January poll.

I decided that I didn’t need to exclude Leeds, Sheffield Wednesday or Sunderland – they weren’t going to get in the way of the rest. Brentford, I mused, didn’t have enough votes to merit inclusion, and I’d have to ignore that single “other”. That left a potential five clubs to add – perhaps too far away from my original idea because of the clutter too many clubs would create.

Would my chart following the progress of our chosen clubs be easy to follow if I added Wolves, Cardiff, Bristol, Derby and Sheffield United? Well, I added them, and  you can see what I got tomorrow.

Next Post
Sunderland: a tragic tale of lost love, disconnect and rebuilding from scratch