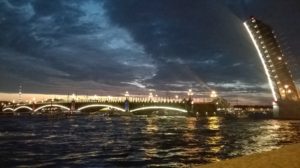 England’s turn at last and even Sunderland supporters with only modest interest in international football will be hoping one or both Jordans do well. Our guest World Cup diarist, Andy Falconer, is having a grand time in St Petersburg, having caught one stadium match and watched others at the FanFest. Here’s how he spent part of the weekend …

I took a rooftop tour early afternoon. It’s one of those cities with legal limits on building height. It’s also very flat and most buildings are tall, so views from any rooftop are outstanding. My little bit of danger for the trip.

The FanFest for Peru vs Denmark was bouncing. Exotic and eclectic mix. We’re all so curious about where each of us is from. I upped the random factor by wearing my Porthmadog shirt. Very puzzled looks.

Intriguing win for Denmark. My pal Fin lived there, so I was a nominal Dane for the day.

I suspect that game, had it been four years ago in Brazil, would have gone the other way.

Peru had dazzling skill and energy, especially early in each half, but lacked the final touch.

Denmark eventually gathered themselves. As the game wore on they asserted tactical dominance and broke through. I remember similar games last time, where the cool Europeans just couldn’t get that kind of foothold in the game against Latin American opposition. Too early to make sweeping statements about that, but I wonder if we’ll see lots of that reversal in 2018. 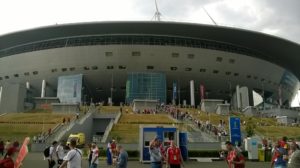 Anyway, from there we went out to a bar for food. Then we went out-out, in a quirky, hip courtyard.

I clocked some pick pockets- the first real sign of problems. No worse than you’d get in any city centre though. Spider sense sorted that one.

And we kept going. Spb + World Cup + Saturday in midsummer = quite the night out.

The sky never really went dark so Fin’s friend took us to see the nightly spectacle of all the city centre bridges opening to allow boats through. The river was full of boats at 1:30am. Then we kept going, via a bar named James Cook (!), with the sky brightening.

After another coffee we went home around 4am. It was still alive on the streets. Music, chilling, really classy. Nothing like the binging back home. Such a good day and getting a friendly handshake from a big Russian fella capped it off beautifully

Next Post
The Beautiful Game? Wrinkly Pete’s thoughts on the power of football