This has now been republished at https://safc.blog/2018/07/who-sixer-met-in-cornwall-likeable-newcastle-fans-cardiff-minus-lee-camp/ and it is there that you should post any comment …

While the estimable David Whitfield was relishing a crushing win for the Lads in Paisley, I was taking the air in Cornwall and picking up the scores thanks to Rob Mason and Keith Scott while watching Falmouth Town of the South West Peninsula League take on and beat local rivals Truro City of the National League South. The final score line of 2-1 to the home team suggests that the game was perhaps more competitive than that witnessed by Messrs Mason, Scott, Whitfield and a host of others.

I spent a week in The Duchy after I had completed my exam marking. I need a break if only to purge my mind of those candidates who thought that Ronald Reagan was black, that Elvis Presley was a threat to American society in the 1920s and that the Great Depression led to soup chickens. The trip was booked long before the appointment of Jack Ross and the setting up of this and the Grimsby game and I had neither the desire nor the intention of cancelling it. I made Truro my base as it was on the railway, had a good selection of bus routes and was the home of Skinners Brewery. It’s a quiet, rather sleepy place, dominated by a 19th Century mock Gothic cathedral, has narrow streets and is a film set for Poldark. Ladies of a certain age could be seen combing the streets in the hope of finding Aidan Turner (he plays Ross Poldark} strolling through the Georgian streets sans shirt.

He wasn’t, and nor was he in The Old Ale House, a fine outlet for Skinners equally fine Cornish beers. The Betty Stogs, a copper coloured bitter named after a Cornish lady who would have relished a romp in the hay with Captain Poldark and the Portleven Pale Ale, named after a nearby coastal village, were on top form – just like the Lads in Paisley.

I followed a well-trod tourist path.

St Ives and The Tate were interesting and the train from St Erth to St Ives is a wee gem. I was a bit disappointed with the exhibition at The Tate as the principal artist, Patrick Heron, was difficult to understand, with his colours coming to the edge and whatever; I may not know much about art, but I know what I like!! Padstow was full of visitors, most of whom seemed to have brought at least one dog, giving this Rick Stein dominated port the look of Crufts.

I took the ferry to Rock, where the Sharp Brothers came up with Doom Bar, a beer that seemed to break the mould but is now part of Molson Coors who are probably the world’s worst brewers. Coors is the nastiest beer I have ever drunk- and they had a non-union policy in their keggery in Colorado.

Helston and The Lizard Peninsula were much better and the Spingo Ales at the Blue Anchor (left) were something special, while Penzance was a decent town which suffers from being near Land’s End and its tacky “visitor centre”. The Crown in Penzance is a fine pub serving Cornish Crown beers; the IPA and the Red IPA are heartily recommended. 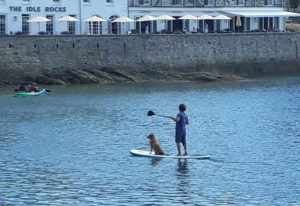 My last day was spent in Falmouth, arriving there on the ferry from St Mawes. The former is a town I took to – a rich maritime heritage, a man playing a hurdy-gurdy and several Captain Jack Sparrow look-a-likes all added to the charm of the place. St Mawes was a real treat. It was Boat Day when I got there and there were all kinds of things going on, including a display of diving in one of those old diving suits with a helmet that weighs more than Stan Cummins, the Kernow Pipe Band, who have their own Cornwall Tartan (the skirl of the pipes made me think fondly of Paisley and the upcoming game) and a man on a paddleboard taking his dog for a trip around the harbour.

Dogs are clearly the big thing in Cornwall. On the return from St Ives, the train to Truro was held up for three minutes at Redruth as a dog has fallen down the gap between the train and the platform. But don’t worry, he’s all right. I think it was Gordon the Labrador who had panted opposite me on the way back from St Ives.

I got a fair bit of football in as well. Cardiff City were down there, presumably staying at the Falmouth campus of Exeter University. Their Under 23 team played at St Austell on the Tuesday and, when I looked at the team sheet, Lee Camp’s name was on it. Alas, he wasn’t there, so I was unable to discuss his time at Sunderland and perhaps discover how bad things were during his stay with us.

I did speak to Andy Dibble, who coaches the keepers at Cardiff as he was in front of me in the tea queue. I failed to recognise him until he mentioned he was friends with Gary Bennett and I espied his initials on his sweat shirt. He spoke fondly of his time at Roker (12 games under Lawrie McMenemy) and that he was genuinely sorry to see the club in such a state. He had a long career, making 397 senior appearances, played a major part in Luton Town’s 1988 Football League Cup winning team and suffered serious burns to his arm and chest when he dived on a pitch that had been treated with chemicals. This happened when he was playing for Barry Town at Carmarthen Town and he was awarded a six-figure sum in damages to compensate for a series of skin grafts.

His charges went two behind to St Austell but came back to win 4-2. They had Lee Tomlin and Anthony Pilkington playing for them and both appear to be surplus to Neil Warnock’s requirements as he tries to put together a team that will hold its own in the Premier League.

The first team played the next night at Bodmin Town and it was the first team. New signings Alex Smithies, Robbie Reid and Josh Murphy (twin brother of Jacob The Mag) all appeared with Murphy scoring a hat trick and Reid looking as impressive as he did against us at the Stadium last year, when he scored for Bristol City. Smithies dropped one clanger allowing Bodmin to score, but as City were 5-0 up at the time, it didn’t matter. They won 11-1 which is hardly surprising as Bodmin play at the same level as Willington, Easington Colliery and Crook Town. But they made a few bob out of it.

I saw Penzance play St Austell in the company of three Newcastle United fans who had been watching their Under 18s playing in a tournament at Mousehole. All three were “good lads” and talked of complicated journeys to watch their team in its pre-season. While we trekked up to Paisley and down to ‘Boro, they were planning trips to Porto and Braga. Not that I’m envious……

St Austell won this one 3-1 despite the referee not turning up and a very young senior linesman taking the game. The Magpies (silly nickname – and very, very common) suffer from the proximity of Penzance and Newlyn RFC which is across the road and is also the home of Cornish Pirates who play at the second level of English Rugby Union. It’s a game that is more popular than football in Cornwall and the four of us at the game struggled to come up with the names of Cornish players who had played at the top level.

The final game was at Bickland Park, Falmouth Town’s home ground. It’s a bit like The Valley used to be and Odsal Stadium in Bradford still is, in that it is in a hollow and spectators can look down on the action. Truro scored an amusing own goal, where the centre half passed it back to the keeper, who took his eye off the ball enabling it to hit a divot and roll into the net. A fine second goal from Jack Bowyer sealed it before The White Tigers (sillier nickname than Magpies) pulled one back from the spot in the last minute. City may have been disappointing but 10 of the 11 starters were not covered in tattoos – only the centre forward had an armful like a Maori warrior.

And so ended a most enjoyable week – good weather, good food (the Slimming World mantra of if it swims it slims was pushed to the limit), splendid ale and four new grounds. A perfect holiday for an ageing obsessive like me. And there’s more to come as The United Counties League Ground hop is on this weekend; another five new ones for me before the serious stuff commences. More about that later, I think.