John McCormick writes. Like Pete Sixsmith I enjoyed watching Wimbledon v West Ham.  But with one eye on the weekend’s  League One results and next week’s fixture I couldn’t help wondering what effect their well-earned win will have on AFC Wimbledon. Will it have knackered them so they can’t compete with our well-rested heroes? Or will it bolster them for what is going to be a bumpy ride to May.

Pete, of course, doesn’t just watch Wimbledon on TV. Let him pick up the story, and tell you in his own inimitable words how he goes about things:

A warm welcome to AFC Wimbledon, who make their first visit to The Stadium of Light, fresh from their magnificent win over West Ham United last Saturday. I watched this one while reclining on my sofa and attempting to read the newspaper, but the game was so exciting, I had to put the paper down.

I was very impressed with Dylan Connolly, recently signed from Irish champions Dundalk. He destroyed the West Ham right back and whoever is up against him this weekend may well have their work cut out.

The Dons have struggled this season after a decent start and they are in danger of being cast adrift. They jettisoned manager Neil Ardley and brought in Wally Downes who had been working in India with his friend and mentor Steve Coppell, and results in the league have not really improved. Their last two league games were at home to Barnsley and Fleetwood and both ended in comfortable wins for the visitors. Where the impetus came from to hammer the Hammers is a mystery so let’s hope they are saving whatever it was for the next round.

My first viewing of AFC was at Bootham Crescent, York on a wet Wednesday night in April 2010. This was their first season in what was then The Football Conference, while for The Minstermen it was their sixth. AFC were on the rise while City were in a slump that would not be arrested for two more years. It was a Wednesday evening game during the Easter holidays (I was still a wage slave then) and I drove down and spent the day in York.

I love a day in York. I shall be there on Sunday when York City Knights open their Rugby League Championship season with a visit from Toronto Wolfpack. I shall travel by train, walk into the city, grab a coffee and a light lunch in a coffee shop next to the City walls and stroll out to dear old Bootham, 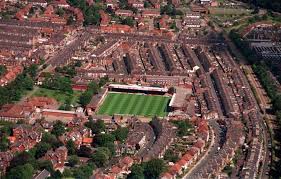 This is a ground, not a stadium, and it is absolutely cemented in the 1950s, surrounded by houses and with a tiny stand and an uncovered end. It will be flats and houses in 12 months as both clubs move to the new community stadium at Monks Cross.

AFC arrived in decent form under manager Terry Brown who had supervised their rise through the Isthmian League and Conference South. In the Conference they rubbed shoulders with former top-level clubs Luton Town and Oxford United as well as Cambridge United, Wrexham and Mansfield Town from the lower divisions.

They had a 21-goal striker in Danny Kedwell who is still finding the net for Ebbsfleet United, as well as current Boreham Wood manager Luke Garrard. They made a number of changes for this game, with neither of the aforementioned playing, after a hard game against run away leaders Stevenage Town on the Monday (they lost 0-3). 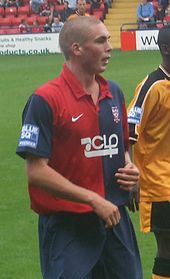 The Bootham Crescent pitch was poor after rain and some snow and it looked to me as if AFC did not fancy this game one little bit. They went behind in the first minute when Michael Rankine scored and then a Richard Brodie hat trick between the 17th and 36th minute. which included two penalties, finished the game as a contest. City eased up in the second half with Rankine claiming his second 15 minutes before time to make it a 5-0 walloping.

Richard Brodie (right and below) is an interesting character. First of all, he is one of us despite being surrounded by Mags in his home town of Gateshead. He started at Whickham in Northern League 2, moved to Newcastle Benfield where he impressed York in a FA Cup Fourth Qualifying Round game. He went on trial (he had previously trialled at Bolton Wanderers) and signed a contract with City 12 years ago to the day.

He did well at Bootham, scoring 53 goals in 135 games before embarking on a tour of the nether regions of professional football. He has had loan stints at Barrow, Fleetwood Town, Morecambe, Grimsby Town, Hereford United, Southport and Macclesfield Town and has signed permanent and short term deals with Crawley Town, Gateshead, Southport, Aldershot Town, Stockport County, Hereford United and back to York City and Southport.

He has also appeared for Boston United, Skelmersdale United, Solihull Moors, Rushall Olympic, Warrington Town and his current club, Ramsbottom United. He came on as a sub on Saturday and scored the final goal in a 6-0 win over one of his former clubs, Skelmersdale United.

I last saw him on Easter Saturday last year when I watched Rushall Olympic take on and beat Northern Premier League leaders Altrincham 2-0. It was the day after The Great Soaking at Derby and the Rushall pitch was just about playable. Brodie had lost some of the electrifying pace that he had exhibited when a callow youth on the Northern League circuit, but he made up for it by using his fairly considerable bulk. The Altrincham defenders were never confident of dealing with him and, although he didn’t score, memory suggests that he played a part in the opening goal.

By the time the Dons arrive on Saturday, we will know the following things;

While the rest of the country worries about potential food and medicine shortages, jobs disappearing and lorries parked up from Daventry to Dover, we’ll get on with the important stuff of worrying about whether the Wear/Tyne derbies will be restored next season. I have a fancy that they will. 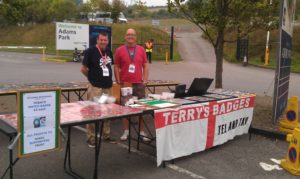 I hope that my good friend Terry Hall of Terry’s Badges enjoys his first visit to Wearside as an AFC Wimbledon fan and I equally hope that he has a miserable journey home.

Wimbledon v West Ham published on Youtube by The Emirates FA Cup 27 Jan 2019. Richard Brodie video published on Youtube by yorkcityfc, May 2016. Salut graphics by Jake.
If there is any copyright claim, not answered by “fair comment” on any of the videos or images used in this report please let us know and we will remove or acknowledge as required