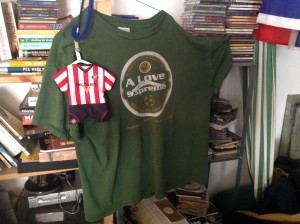 This, as I may have been heard saying elsewhere, is nothing special as a T-shirt. It is old, a bit faded and not even in red and white colours.

It repeats the name of the fanzine A Love Supreme, from which I bought it ages ago, and bears ALS’s name in white lettering on a green background. And beneath that is the modest slogan: “Probably the best fanzine in the world.”

But it’s the thing I try to remember to wear whenever I get to a game and, often enough, when I am not there but do what I can to follow.

I began to question this when my season’s debut, and the ALS T-shirt’s on my body, coincided with Swansea 4 Sunderland 0. I’d just got back from France, I’d been moderately impressed by our first-half performance and then I’d been humiliated.

But it worked well enough elsewhere – notably at Goodison and Fulham – and it worked brilliantly on Sunday. I had been wearing it to cut a hedge the day before so it was not quite as fresh as I’d have liked, and there was the risk of the occasional thorn pricking its way into flesh as Benno and I whooped at each goal.

Tell me what you wear, where you drink, what you do as a pre-match or during-match ritual.

A prize of some sort awaits the best reply. Like poor old CSB (4-0 being his latest correct Guess the Score prediction), you may have to wait for it but in his case there’s good reason since he has now accumulated four Salut! Sunderland mugs and we’re waiting for a fifth to make it a postage-free delivery.

Next Post
Sixer’s Soapbox on the drubbing of Cardiff: keep calm and carry on