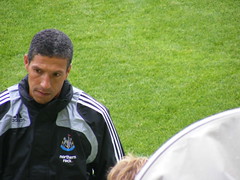 Little more than a month after the sort of result that should have gained him the freedom of Newcastle, with rights to shepherd his flock of sheep over the Tyne Bridge, Chris Hughton has become the latest manager to find out what clubs mean when they deny dismissal rumours.

The board would like to place on record their thanks to Chris for his considerable efforts during the club’s transition from Championship to Premier League football.

Chris has shown exceptional character and commitment since being appointed manager in October 2009. The club wishes him well for the future.

Regrettably the board now feels that an individual with more managerial experience is needed to take the club forward.

The task of appointing a new manager now begins. An announcement will be made shortly regarding transitional arrangements pending the appointment of a successor. “

Chris may have been a thoroughly decent man who had done wonders in getting his team back to the Premier at the first opportunity after a calamitous relegation. he may have got his his team off to a creditable start, despite one or two poor results.

The club may have responded to speculation around the time of the 5-1 mauling of Sunderland by saying it intended to extend his contract in the new year.

But you cannot argue with the facts.

United’s failure to ensure Premier survival by the end of November was a significant factor in Mike Ashley’s decision. There were also persistent question marks over Hughton’s chance of leading the Mags to a top two place this season and the Champions’ League trophy next season.

So he had to go. That’ll teach him to underachieve so spectacularly.

The whole football world will understand Mike’s cool-headedness in the face of imagined crisis. 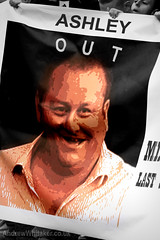 As Matt of Iron put it at the West Ham fan site Knees Up Mother Brown:

“Unbelievable. Ashley is a f***ing moron.”

28 thoughts on “Hughton sacked as Newcastle take leave of senses”

Next Post
The West Ham Soapbox: head start on the Hammers